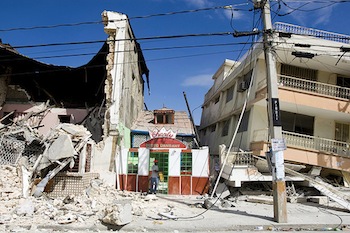 On January 12, 2010 a massive earthquake struck Haiti. What lessons can we learn from the role digital media played in the response? Photo by United Nations Development Programme via Flickr

This article was co-authored by Mayur Patel

Tomorrow marks the anniversary of the devastating earthquake that shook Haiti last January, killing more than 230,000 people and leaving several million inhabitants of the small island nation homeless. Though natural disasters are common, the humanitarian response this time was different: New media and communications technologies were used in unprecedented ways to aid the recovery effort.

Disasters will continue to occur. But their damage can be mitigated by relief efforts that are well-planned and executed in concert with the local population."

A report released today by Communicating with Disaster Affected Communities, with support from Internews and funding from the Knight Foundation, takes a critical look at the role of communications in the crisis and recommends ways to improve the effectiveness of utilizing media in future disaster relief efforts. (The Knight Foundation is a major funder for MediaShift and its sister site MediaShift Idea Lab.)

In the weeks after the crisis, Haiti quickly became a real world laboratory for several new applications, such as interactive maps and SMS texting platforms. In the aftermath of the quake, these tools were used for the first time on a large scale to create dialogue between citizens and relief workers, to help guide search-and-rescue teams and find people in need of critical supplies. The report, Lessons from Haiti [PDF download] (co-authored by Anne Nelson and Ivan Sigal, with assistance from Dean Zambrano), recounts the stories of media participants, technologists, humanitarian organizations, Haitian journalists and response teams involved in the relief. Many of these players were first brought together to share their experiences at a roundtable convened by the Knight Foundation and Internews last May.

“The most notable innovations to emerge from Haiti were: the translation of crowdsourced data to actionable information; the use of SMS message broadcasting in a crisis; and crowdsourcing of open maps for humanitarian application,” according to the report. A dizzying array of new media and information technology groups, Haitian diaspora networks and media development partners were involved in these initiatives (see the infographic below). Although these innovations had varying levels of impact in Haiti, they showcased the potential for use in future crises.

One of the most notable developments was the application of Ushahidi, an online crisis mapping platform that was born only a few years earlier in Kenya. Ushahidi had already been used to map political violence, but it had not yet been used in the context of large-scale natural disasters. When the earthquake struck, an ad hoc coalition quickly took shape, anchored by a group of graduate students at Tufts University in Boston.

The Ushahidi teams, supported by translators from the Haitian diaspora community in the U.S., gathered information from news reports and individuals about the most acute needs on the ground: rescue, food and water, and security, among others. The coordinates were placed on a map and made available to rescue and relief teams.

Soon they were able to include SMS texts in their bank of information. A few days after the quake, Digicel, one of Haiti’s leading telecom companies, agreed to offer a free short code (4636) for SMS texts in service of the relief efforts, with the help of InSTEDD, a technology focused humanitarian organization. The four-digit code enabled cell phone users to send free messages to central information centers about missing persons and emergency needs. SMS messages and direct reports from Haitian citizens began to flow within four days of the quake.

OpenStreetMaps, an open community of volunteer mappers, joined the effort to create online maps of Haiti’s improvised and unnamed neighborhoods. These maps became the standard reference points: Users included not just information technology platforms such as Ushahidi, but also large providers of humanitarian services, such as the UN Office for the Coordination of Humanitarian Affairs (UNOCHA) and the International Federation of the Red Cross (IFRC).

Not Necessarily a Success Story

However, the CDAC Report cautions against calling the Haitian experience a “new media success story,” as some of the approaches — attempted for the first time — faltered. The crisis threw together volunteer technology communities and professional humanitarian organizations, without a common language and operating procedures. A lack of coordination and understanding of how to use and integrate the new tools into existing disaster relief structures further complicated efforts on the ground.

In addition, new media efforts did not preclude the importance of traditional media. As in past crises in the developing world, radio continued to be the most effective tool for serving the information needs of the local population. With Haiti’s newspapers and television broadcasters knocked out of production for the first few weeks after the quake, radio provided a heroic lifeline. One Haitian station, SignalFM, was able to broadcast continuously throughout the crisis, and worked closely with both international relief organizations and the digital innovators in support of the population. Popular radio host Cedre Paul reached his audience via Twitter as well as on the air.

“We have always known that one of the best ways to communicate with affected population in crises is through radio broadcasts,” said Mark Frohardt, vice president of humanitarian programs for Internews, a media development organization. “We found in Haiti that innovative technologies not only had an impact on information delivery on their own, but also greatly enhanced the reach and effectiveness of radio.”

Still Work to be Done

For all the welcome innovation, the report makes it clear that digital humanitarian action has a long ways to go. One of the big obstacles to the Haiti effort was the lack of pre-existing connections between the large government and international institutions and the new tech activists. Large institutions tend to mean weighty protocol, some of it based on long and bitter experience. The International Committee of the Red Cross (ICRC), for example, has strict rules of confidentiality, which has allowed it to play a uniquely useful role in conflicted and tense situations, while the open source community’s hallmarks are spontaneity and transparency.

Nonetheless, the connections among the various sectors advanced in Haiti, stimulated by a common desire to help, and there are many signs that new synapses are emerging. For example, CDAC has made some progress bridging the gaps between the humanitarian and media communities. The report calls for more of this kind of cross-sector collaboration to improve future recovery efforts. Specifically, it recommends that media, new technology developers and humanitarian agencies (both UN and international NGOs) engage in joint preparation and simulation exercises for future emergency responses.

We should not forget that Haiti’s crisis is far from over. Many donors have yet to fulfill their commitments for reconstruction funds, and much of the rubble remains. New digital initiatives are still appearing; one promising new effort from MIT is an online labor exchange for Haitians called Konbit.

Disasters will continue to occur. But their damage can be mitigated by relief efforts that are well-planned and executed in concert with the local population. Digital media technologies offer a unique opportunity to advance these goals with the right on-the-ground coordination. As the report notes: Haiti demonstrated “the culmination of a vision and the beginning of the hard work of implementation.”