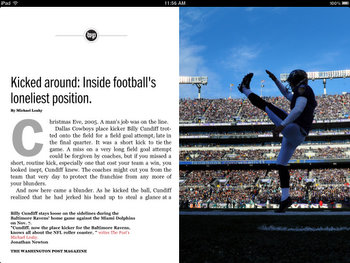 A spread from The Washington Post Magazine, as seen in the Flipboard iPad app.
The iPad certainly hasn't made print magazines extinct, and some of the early iPad efforts may even have discouraged readers a bit."
Click here to read all the year-end roundups
ADVERTISEMENT

This revolution is going to take its time.

It’s been a year of high expectations but little fulfillment for those who thought 2010 might forever change the way we read magazines. We’ve seen that disappointing uses of new tools, limited audience interest, and small initial financial returns are going to result in a gradual shift, not a sudden transformation.

The iPad certainly hasn’t made print magazines extinct, and in fact some of the early iPad efforts may even have discouraged readers a bit. Other developments in the magazine world — such as the Cooks Source incident and the growing power of social media — also suggest still more challenges and opportunities in the year to come.

The Challenges of Innovation for the iPad

The number of print magazines stayed steady in 2010, with 193 launches and 176 closures — a great improvement over 2009’s remarkable 596 casualties, as reported by Folio. In the meantime, readers began experimenting with digital magazines on the iPad following the device’s April release. Zinio, a digital magazine provider, had its app in the App Store on the iPad’s release day, meaning the digital replica-style magazines Zinio offered could immediately be read on the iPad.

Multiple magazines soon released their own dedicated apps for the iPad, such as Wired’s much-touted app, which in June 2010 sold 105,000 copies, exceeding that month’s newsstand sales. However, Wired’s app didn’t repeat that feat in later months, with sales dropping to 32,000 copies by September. Other magazines, such as People and Men’s Health, have only achieved 1 to 2 percent of their newsstand sales with their iPad apps, according to Ad Age.

But how happy have users been with these digital magazines, and how rewarding have they been for publishers? A recent study by the Reynolds Journalism Institute found that users rated their reading experience only “somewhat better or about the same” than their use of print media or computers for reading. The users also said they would be most likely to buy news-related apps if the prices were lower than those for print subscriptions — not the same or higher, as the prices generally now are for magazine apps.

Users of iPad magazines have also criticized what they see as a lack of creativity and technological savvy in designing usable, intriguing magazine apps for the iPad. Today’s magazine apps tend to be dull, clunky replicas of print magazine pages that don’t let readers share content via social media or even email. Despite being designed only for the iPad, even Project, the much-anticipated iPad-only magazine from Richard Branson’s Virgin Digital Publishing, was disliked by some readers for its awkward interface and its insistence on re-creating the print page experience.

Perhaps some of the reluctance to experiment with new interface designs and multimedia integration comes from a fear of alienating iPad users who might expect a magazine-like experience, including the feel of “turning pages.” However, with the iPad still in its early-adopter phase, this seems like the perfect time for experiments that demonstrate to readers that a digital magazine app can offer more than the printed page — and that the experience can be worth a premium price.

Ads and Subscriptions on the iPad

Advertisers have seemed quite interested in buying space in digital magazines, and publishers are experimenting with new formats for ads. Though window-shopping is usually free, simulating the experience in a new iPad ad included in the forthcoming Cosmopolitan app will cost advertisers $50,000, according to Mediaweek. In the meantime, Apple has launched iAd for the iPad, building upon its use of the advertising tool on the iPhone. It plans to broaden the use of iAd in 2011. The first iAd on the iPad — for Disney’s movie “Tron: Legacy” — will run in the TV Guide iPad app, among others. More magazine publishers could become involved in the iAd platform as well.

Finally, one of the biggest obstacles to activating and maintaining reader interest in digital magazines is the difficulty of locating an app for a favorite magazine and then somehow getting a subscription to it. So far, Apple charges its standard 30 percent commission on magazine app sales, and requires the use of external subscription management software, according to Folio.

Until Apple develops a more user- and publisher-friendly newsstand, digital magazine app subscriptions will likely be limited. In the meantime, five major publishers — Conde Nast, Hearst, Meredith, News Corp., and Time — are taking matters into their own hands and developing their own alternative in the form of Next Issue Media, which promises to provide “open standards for a new digital storefront” that will sell magazines and newspapers for a variety of e-reading tools, not just the iPad.

In addition to existing competition from the Kindle, Nook, and Android devices, those e-reading tools might include new tablet devices that run Windows 7. If Apple wants to maintain the loyalty of its early adopters, including many avid e-readers, offering easy access to high-quality magazine content will be important in the coming year.

The iPad is obviously the biggest story of the year in the magazine world, but other issues are playing out on the web and behind the scenes. Magazines are reshaping their content and strategies for the digital world, and this is causing a reconsideration of ethical issues that underly the production of content.

The Cooks Source incident this fall underscored the difficulty of maintaining authors’ rights to their work in the digital age. The small magazine “for food lovers of Western New England” took a writer’s piece on apple pie and reprinted it without her permission. When the blogger complained, the editor claimed that “the web is considered public domain and you should be happy we just didn’t ‘lift’ your whole article and put someone else’s name on it.”

Even after Cooks Source relocated on Facebook, its critics followed

Soon after this incident, another small magazine, Dairy Goat Journal, was exposed for using a blogger’s photo without permission or payment, or even her name. The bad publicity resulting from these ethical failures creates doubt among the public and even among fellow journalists about the credibility of journalistic content when everything in digital form seems — but most definitely isn’t — free for the taking.

Likewise, new advertising techniques in both digital form and in print have raised concerns about ethics. Forbes’ use of paid blogs from advertisers as part of its online redesign (described here on MediaShift) is just one of many efforts to develop sponsored content for magazines’ digital formats. As financial pressures increase, and deals for advertorial and sponsored content online and in print become more appealing, magazines will have to be vigilant to maintain a clear line between editorial and advertising content.

As these experiments continue — on the iPad, other e-readers, the web, and in print — magazines new and old continue to challenge the traditional definition of their medium. Juan Senor of Innovation Media Consulting, interviewed earlier this year here at MediaShift, described magazines today as “content propositions”: Concepts that lead to collections of multimedia content, rather than strictly to the creation of bundles of paper. Even the Magazine Publishers of America, first established in 1919, acknowledged the changing industry by renaming itself this year to “MPA – The Association of Magazine Media.”

Some exciting variations on “magazine media” that we’ve seen this year include the socially curated, customizable digital magazine and the rise of print-on-demand and web-based options for one-off and independently published magazines.

Flipboard, the iPad app that draws together customized content from a user’s social streams and from various major providers, now also includes a few traditional print magazines through its new Flipboard Pages. Unlike most dedicated magazine iPad apps, Flipboard presents articles alongside relevant social media commentary and allows easy social sharing of content, making the content more engaging and participatory. The Flipboard Pages streams are presented first like any other Flipboard article, but then can be opened in a more magazine-like layout, including full-page ads.

Flipboard’s combination of the social experience with the magazine experience is compelling, as demonstrated by its early struggles to keep its servers functional to meet demand. Its design suggests a possible path for the development of other magazine-related apps. Clearly, this approach exemplifies the “content proposition” model of magazine publishing.

In the coming year, we’ll probably also see more experimentation with tools that are making magazine publishing more accessible to the public, such as print-on-demand and web-based digital magazines. The success of the crowdsourced, print-on-demand magazines 48 HR (now renamed Longshot) and Stranded, as well as the availability of HTML5 web distribution platforms like NoLayout, targeted to indie magazines and accessible on mobile devices, show that with ingenuity and the right tech, crafting and distributing a new magazine is entirely possible, even with limited time and money.

Although 2010 might not have yet delivered on the revolution in magazines that some hoped for and was disappointing in some ways, it certainly demonstrated that publishers big and small are creating innovations that — slowly but surely — will remake the industry.