What the Viacom vs. YouTube Verdict Means for Copyright Law 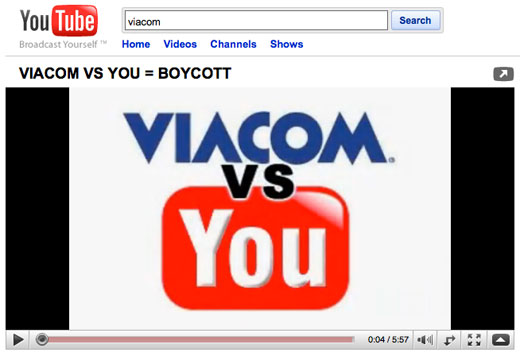 Some have called it a license to steal. To others, the recent Viacom v. YouTube court decision was no less than a trumpet heralding the protection of free speech on the Internet. And yet to a third contingency, Manhattan federal judge Louis Stanton’s decision was really an exercise in high-minded legal theory.

Regardless of your outlook on the case, it is clear that the decision was a key step in addressing one of the hottest issues currently affecting the media — protecting copyrights on the Internet. The case pitted two of the modern Internet user’s best friends against one another: entertainment producers (Viacom) versus programming distributors (YouTube, which is owned by Google). Hanging in the balance is the future of video on the Internet.

Viacom has to be responsible for policing its own content." - Kurt Opsahl, EFF

Viacom, the media conglomerate that owns a slew of television networks as well as Paramount Pictures, sued Google, the owners of YouTube, for direct and secondary copyright infringement. In essence, Viacom claimed that YouTube violated copyright laws by helping distribute illegally copied videos that were uploaded to the site by individual users.

The case centered on the Digital Millennium Copyright Act (DMCA). This federal law, enacted in 1998, was meant to update copyright laws for the 21st century. Within the law, legislators created a way for website producers to escape copyright lawsuits, called a “Safe Harbor” provision. In order to invoke the Safe Harbor, the court ruled, YouTube must remove any material violating copyright laws once it has “specific knowledge” of particular copyrighted videos that the site is helping to distribute. Judge Stanton concluded that it was against the DMCA’s purpose to hold YouTube legally liable for every video uploaded on the website — some 20 hours of video every minute — even if they might have had a general idea that the site was being used to violate copyright laws.

Viacom has stated that it intends to appeal the ruling to the Second Circuit Court of Appeals, one of two federal appellate courts that frequently hear these types of cases. While Judge Stanton seemed relatively comfortable on the footing he created with the opinion, a higher court may simply disagree.

Judge Stanton focused heavily on the statements of legislators prior to the DMCA’s enactment, often referred to as “legislative history.” While that may have sufficed for Judge Stanton, many other judges (Justice Scalia on the Supreme Court most notably%) find such inquiries to be generally unpersuasive.

The Burden for Viacom

The problem for Viacom on appeal, according to Kurt Opsahl, senior staff attorney at the Electronic Frontier Foundation (EFF), is that they are essentially asking a court to change commonly used interpretations of the DMCA.

“That’s a heavy burden and they weren’t able to come up with it at the district court,” he said. Viacom’s best bet may be to argue that the judicial interpretations of existing laws simply do not protect copyright holders in the way that Congress originally intended.

If, however, Viacom were to win on the appeal, almost everything we know about video on the Internet could change.

“YouTube certainly wouldn’t look like it does now,” said Sherwin Siy, deputy legal director at Public Knowledge. “Sharing video clips on the Internet would just go out of the window.” Both Public Knowledge and the EFF have publically supported Google’s position in this case, filing court documents on their behalf.

Siy went on to note that if websites that display user-generated content are held liable for all of the material posted on their site, these forums for social networking will evaporate under the constant fear of being sued by copyright holders.

Who to Protect: Producer or Distributor?

The court’s opinion was grounded on the purpose underlying the DMCA, which, Judge Stanton stated, was mindful of the inherent tension between content producers and distributors on the Internet. On one hand, copyright laws need to protect the rights of video creators. Without such rights, media giants like Viacom would not have the economic incentive to create quality video programming.

According to a San Francisco Chronicle editorial published on Monday, strong copyright protections are needed to ensure that those talented enough to create programming can make a living doing it.

“We can’t expect people to create things for free — unless we believe that the only people in our society who can be creative are those who are already rich,” the editorial stated.

On the other hand, if copyright laws are too restrictive, Internet buffs would be unable to experiment with different video distribution models. When the Viacom case was just starting, the EFF released a statement noting, “If Viacom convinces a court that YouTube is nevertheless liable for copyright infringement, it could have a chilling effect on any business that hosts content on behalf of users and thus frustrate the many perfectly lawful uses of such technologies.”

In accordance with EFF’s stance, Judge Stanton’s decision essentially holds that while copyright holders need to be protected, Congress (via the DMCA) wanted to protect the Internet’s open development even more.

The court’s ruling is also consistent with the theory supporting another law directly aimed at lawsuits on the Internet: Section 230 of the Communications Decency Act. Section 230 protects website producers from being sued for the statements Internet users make on a site through the use of comment forums and the like. While Section 230 has been criticized, courts have agreed that in passing the law, Congress’ intent was to make website producers immune from liability in order to foster innovation and growth on the Internet.

Additionally, Judge Stanton had a practical basis for his decision. Although it is surely difficult for Viacom to troll the Internet minute-by-minute attempting to find illegally copied or distributed video, it is not impossible. The court put the onus on content producers — not distributors like YouTube — to police the Internet and seek out when their copyright material is being illegally uploaded. YouTube’s case was surely helped by the fact that when Viacom notified the website that it was hosting specific copyrighted videos, YouTube swiftly removed them from the site.

Opsahl said the case boils down to deciding who must protect copyright on the Internet — the copyright holder or a website.

“Viacom has to be responsible for policing its own content,” Opsahl said. “Viacom was putting forth the notion that they shouldn’t have to lift a finger and that YouTube should make sure that Viacom’s copyright problems are solved.” In contrast, Viacom, a supporter of the User Generated Content Principles, sees protecting copyright on the Internet a shared responsibility between both content producers and Internet distributors.

The DMCA was passed in 1998 at a time when the Internet we have today may have seemed unfathomable. While the law, according to Judge Stanton, intended to protect the Internet’s development, Viacom and others have questioned its use in the modern-day information age.

For instance, the news industry has been complaining that current copyright laws do not adequately protect their rights for years. During a recent roundtable discussion hosted by the Federal Trade Commission concerning “the Reinvention of Journalism,” many panelists discussed whether existing copyright laws offer publishers any solace in the 21st century.

The problem with updating laws to suit today’s Internet is that it would have to be done again and again as the Internet continues to develop and transform. Just as it may have been impossible to predict the Internet of 2010 in 1998, it may be similarly unlikely that today’s Congress could predict the laws needed to govern the Internet of 2022 and beyond. What’s more, the chances of passing an entirely new copyright law every few years is simply doubtful given the political sweat, momentum, and, frankly, luck needed to enact legislation.

Currently, the Federal Communications Commission is attempting to find the authority to enforce network neutrality regulations within the Communications Act of 1934, a law that was most substantively updated back in 1996. The law that the FCC is searching through slaps a definition on the term “Internet,” but does not refer to it much after that, appearing on just three pages in the 333-page document. And yet, despite a lack of express statutory power to regulate certain aspects of the Internet, the FCC may have a good chance of getting its way. While some are more skeptical than others about the FCC’s reach here, the principle of this issue can be imported to Viacom’s problem with existing copyright laws.

The 1934 Act gives the FCC broad power over a host of activities in the communications sector. While Congress undoubtedly chose to give the FCC the authority to speak with the force of law on these subjects for many reasons, one must have been the difficulty of passing new laws every time communications technology changed. The FCC, which is divided into specialized “bureaus” and must review some of its regulations as often as every two years, has the experience and mandate to frequently re-consider whether older communications regulations still serve the public’s interest.

While some would scoff at the idea that the FCC should be permitted to enact copyright rules for the Internet, delegating this area of law to an existing or newly created administrative agency would, at the least, ensure that the changing Internet is not governed by aging laws.

However, there is a considerable counter-argument here. When the ability to create regulations is delegated from Congress to an agency, the seat of power moves further from the voting public. Voters do not directly elect the heads or officers of administrative agencies. An additional problem with delegating this power to an agency is that it might well be unconstitutional. Article I, Section 8, Clause 8 of the Constitution mandates that Congress protect copyrights, not agencies. However, in practice, Congress often delegates powers to administrative agencies that may violate a strict textual reading of the Constitution.

The Viacom v. Google case, it appears, has exposed a weakness in current copyright laws. What’s more, the outcome of the case has the potential to affect every Internet user — and most don’t even know it. If nothing changes, content producers could lose billions and may but the brakes on quality video programming on the Internet. If copyright laws change, we risk having to do this whole thing over again next decade. But if we give the authority to make regulations to an administrative agency, voters lose their direct control over how laws are made.

UPDATE: The original version of this story has been edited to note Public Knowledge and EFF’s direct involvement in this legal proceeding and to express Viacom’s support for the UGC principles.

4 responses to “What the Viacom vs. YouTube Verdict Means for Copyright Law”