The Case for Turning Around Print Media Companies 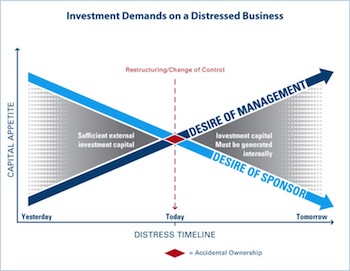 This article was co-authored by Neil Heyside.

The media and publishing industry — and print publishing in particular — doesn’t have to show up to its own funeral.

There are still too many editors and rewriters and not enough writers and copy clerks."

There’s still opportunity to enable profitable, desirable businesses. We’re not suggesting that a recent uptick in advertising sales is a sign that publishers can go back to the old days of 25 percent net profit margins. Media companies had been so profitable for so long that eventually both owners and banks that were the beneficiaries of the cash flow from over-leveraged franchises left them needing reinvestment capital.

Let’s forget for a moment that the change brought by the digital evolution has chased off some print dollars, perhaps for good. The ugly truth that no one seems to want to face is that 1) many media companies need better and more efficient management techniques and 2) many of these same organizations are starved for capital investment and innovation.

It is the perfect time to bring change into such companies to allow them to create efficiencies that fund their own sorely needed capital investment. Many industries would kill for a 15 percent net return, and media companies, print included, can easily sustain that into the foreseeable future.

The Problem of Accidental Ownership

Few industries can withstand economic downturns. It is our view that while revenues for cable, network television and radio are off, they will return to traditional levels once the economy recovers. The fastest return will be felt in online media.

Print publishing is another matter. Newspaper Association of America statistics show that newspaper ad revenues have fallen for 13 quarters in a row as of 1Q 2010, or off 46 percent from four years ago. Moody’s recently came out with a prediction that the 22 percent decline in 2009 will be followed by a 10 to 15 percent drop this year, with a possible slight increase in 2011. While local newspaper ad revenues are growing, national print advertising that departed for digital media and Internet-based direct marketing will never return.

This has led to serious concerns at major print media outlets. During the last year alone, numerous print-based media organizations have emerged from bankruptcy or out-of-court restructuring; largely the deals amounted to converting debt to equity. Diverse debt holders such as GE Capital, JPMorgan Chase & Co., Deutsche Bank and Merrill Lynch and opportunistic debt investors Angelo Gordon and Fortress Investment Group now rest uneasily at the head of the table in boardrooms in the major media print industry.

Still, the losses in ad revenue are slowing down and there’s some optimism in the business. Management wants to reinvest capital in their businesses, believing that an improved economic environment is the answer to their problems. Management tells its new ownership it has cut costs to the bone. However, the accidental owners — the banks and private equity groups — are not keen or structurally capable to reinvest in these businesses. They’re also not as convinced of the belief that the companies have been made as efficient as possible.

How to Generate Investment Capital Where None Exists?

Many U.S. print publishers have downsized their workforces in accordance with their revenue losses, but they haven’t changed the way they operate. It’s the same inefficient, outdated model that they operated in the past. If the industry is upside down already, how does it generate investment capital where none exists?

The traditional way of a magazine or newspaper to make change happen is to re-launch the publication with a new look and content, but it isn’t much more than cosmetic. Because of the lack of investment in technology — sales management technology, digital and newsroom technology, accounting technology — publications don’t have the information in their hands to make decisions about resource management and where or what to invest in to improve results.

We’ve taken more than 800 publications through this process and found operational efficiencies worth nearly $200 million annually in the United Kingdom and the U.S. These efficiencies have been as a result of not only reducing capacity, but also changing the way people work and changing the way they think. In most cases, the organization has used a significant percentage of these benefits to re-invest in the business, investment that otherwise wouldn’t have been forthcoming.

All media companies — we even include the trade show industry here — would benefit from understanding two concepts. First, you need to understand the cost of quality in content creation. This is traditionally a subjective conversation that needs to be turned into a more objective one in order to become more effective. Companies need to undergo an analytical process, the outputs of which allow the organization to fully understand where they are spending their money and what are they getting in return in terms of value.

The second key concept is that the organization needs to optimize its sales force across both print and digital platforms. The old media model was based on inbound order-taking and today, many media sales forces that had forgotten how to sell are struggling with the fact that media is now an outbound sale. Organizational structures have to be based around activity and performance, with sales management systems and processes that require employees to have more accountability.

Despite the protestations of management, there are more optimization opportunities in media companies to be had to revitalize the companies. In our experience in the U.K., half of the savings the companies created were reinvested in the business: in digital, in better content and more efficient technology. One company needed $2.5 million to improve its digital product. The owners said no. But the company found the savings on the print side and moved it to digital, which the owner then matched.

We’ve met with a dozen stakeholders involved with major media companies as we roll out this process who believe that there’s still a significant amount of opportunity that can be generated from their portfolio companies where management says “we’ve taken out every dollar of cost we can.” This capacity can then be redeployed and reinvested. All the parties need is better information and an objective collaboration and the time to do it is now.

2 responses to “The Case for Turning Around Print Media Companies”