Rethinking the Role of the Journalist in the Participatory Age 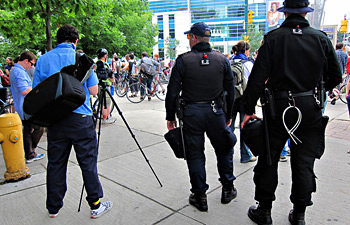 The recent G20 protests in Toronto were captured in photos and video by journalists and citizen reporters. Photo by Alfred Hermida
The challenge for the journalist is to find a place along the continuum between control and connection, and between a closed and a collaborative media culture."

Students who dream of a career in journalism are entering the profession at a time when the question of who is a journalist, and even what is journalism, is open to interpretation. The function of journalism is still to provide independent, reliable and accurate information considered vital to a vibrant democracy. But defining who is a journalist is much harder.

The Oxford English Dictionary defines a journalist as “a person who writes for newspapers or magazines or prepares news or features to be broadcast on radio or television.” The definition is less about what a journalist actually does and more about whom they work for. It reflects how the profession of journalism developed in a mass media system, based on the production of news by paid professionals who decided what the public needs to know, when it needs to know it and how it will know it.

The media industry is going through a profound transformation that is disrupting just about every aspect of the business. Journalists are at the center of a transformation that is challenging norms and routines that have remained, until now, highly consistent. It all amounts to, in the words of media scholar Mark Deuze, “one of the biggest challenges facing journalism studies and education in the 21st century.”

The new journalist needs to learn and understand how news and information works in a digital world, instead of simply applying established norms and practices that may no longer be effective.

Studies show that journalists have been reluctant to give up their traditional gatekeeping role. BBC News executive Peter Horrocks has described this mindset as fortress journalism (PDF) — seeing the profession as a practice to be defended. As a result, journalism as a profession largely considers the media environment to be the same as before, only now more technologized.

New media technologies do not just offer journalists new ways of doing their old job. A newspaper online is not the same as a newspaper in print. On paper, the newspaper delivers a bundle of stories, ads and amusements, such as the crossword puzzle. On the web, the newspaper package is unbundled into individual fragments. The stable, hierarchy of information in the printed newspaper falls apart online.

Scholars Colin Lankshear and Michelle Knobel have researched what they describe as the shift from a physical-industrial mindset to a cyberspatial, post-industrial mindset. They write that “the world is being changed in some quite fundamental ways as a result of people imagining and exploring new ways of doing things and new ways of being that are made possible by new tools and techniques.”

Literacy has traditionally been described as the ability to read and write. New literacies generally refer to new forms of literacy made possible by digital technologies, such as blogging, uploading photos or sharing videos. According to new literacies, media is collaborative, distributed, and participatory nature.

Let’s look at one of the ways this applies to journalism. Traditionally, journalism has been about producing finished products by designated individuals and teams, based on individual expertise and intelligence, operating in a shared physical space. However, new literacies research suggests that the changes taking place challenge fundamental norms, conventions, and routines of journalism.

One example is the ability of the audience to report and distribute the news in photographs, videos, and text, which undermines the monopoly on reporting that journalists traditionally enjoyed. Anyone can do an act of journalism, from sending a tweet about a G20 protest to uploading a photo of police and demonstrators.

Seen through the lens of new literacies research, digital media is more participatory, collaborative and distributed, and less finalized, individualized and author-centric than previous forms of media. The journalist still matters. But as Tom Rosenstiel has suggested, they shift from being the gatekeeper to being an authenticator of information, a sense-maker to derive meaning, a navigator to help orient audiences and a community leader to engage audiences.

Both those taking their first steps into journalism and those who have already followed a well-trodden path need to figure out where they fit in. The role of the journalist is being determined by the complex interplay between media technologies, professional practices, and societal factors.

Journalism developed as a relatively closed culture for the production of knowledge, based on a system of editorial control. Yet new media are characterized by their connected and collaborative nature. The challenge for journalism, and the journalist, is to find a place along the continuum between control and connection, and between a closed and a collaborative media culture.

This piece is adapted from a chapter appearing in The New Journalist: Roles, Skills, and Critical Thinking, a new textbook for journalism students.