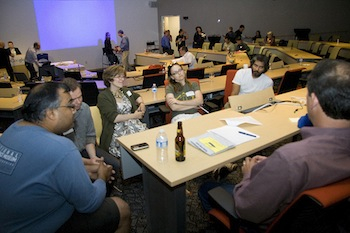 People gathered to come up with ideas at Techdirst Saves Journalism. Photo by Dennis Yang, Techdirt

What will the journalism landscape look like five to 10 years from now? The megatrend of unbundled, specialty-focused niche sources of online information likely spells doom for many of today’s lumbering media giants. But opportunities abound for new players, as well as for daring news brands willing to expand their notions of what it means to stay competitive in the age of social media and networked experiences.

That was one of the few areas of consensus at a gathering convened at Google headquarters Wednesday night. Some 60 business people, coders, journalists, attorneys and others attended the fancifully named Techdirt Saves Journalism, a powwow whose goal was to spark a few ideas that might prove useful to enterprising newcomers, as well as those who write journalists’ paychecks today.

What's clear is that there's no single solution to the how-do-we-pay-for-journalism problem."

The rambling two-hour event produced five separate brainstorming sessions, with some participants looking to prop up publications like the Sacramento Bee and Harper’s Magazine; others were keen on supporting community journalism. As Mike Masnick, the Techdirt editor who convened the gathering, put it: “The journalism business has always been the community business.”

Below are six takeaways from the event.

Hal Varian, Google’s chief economist and top numbers cruncher, gave a rundown of the presentation he gave to the Federal Trade Commission in March. (His slide deck is below: Newspaper Economics, Online and Offline.)

Among the sobering stats:

Varian, like many others before him, pointed out the conundrum faced by traditional general-interest news publications. “The problem is, newspapers never made money from news,” he said. “They made money from automotive, home and garden, real estate, health and other specialty sections.”

Journalism enjoyed a free ride in an era of bundled content. Now that era is disappearing, and readers are flocking to sites like Yahoo Finance, Edmunds, Amazon and Zillow as niche sources of expert advice.

OK, we knew that. What does Varian prescribe?

Dig deeper into the metrics. Study the Newspaper Association of America’s Trends and Numbers to glean opportunities.

“Measure what users seek and what they read and move into those areas: more product reviews, more video, more local news,” he said.

Other advice included providing useful commercial opportunities through contextual targeting, and exploring partnerships with local merchants in the mobile space.

He also noted that Google is facing some of the same challenges with users’ fickle skimming of YouTube videos. “We’ve been trying to connect episodic headline skimming with a deeper dive,” Varian said, citing initiatives like Fast Flip and Living Stories.

In other words, urged Varian, “Experiment!”

One breakout group urged news publications to think of themselves as a “news talent agency” that attracts expert reporters and helps them build their brands on the site and through social networks like Twitter and Facebook. People want to connect with experts and star journalists on a peer-to-peer level, not with a faceless institution.

3. Create a platform for your community

Take advantage of talented bloggers, videographers and podcasters in your community, as Chicagonow is doing by aggregating hundreds of local bloggers on its site. Then, curate the feeds to expose the highest-quality content and conversations.

Make it easy for users to contribute content and to hold conversations about every piece of content on your site — or on another site. By opening up your website’s doors to the community, you can foster a sense that you’re providing a townsquare rather than a cordoned-off private space. Increased engagement and participation at all levels of your site will lower content creation costs and offer new entry points for making money.

With Facebook on track to surpass 500 million members by late this year, people need to think about how they’ll find out about news at the local level.

“My generation has a mindset that they don’t care about local when they really, really do,” said Geoffrey Samek, 28, co-founder of the Sacramento Press. “Bicycle laws, bike paths changing, streets in disrepair — I hear people my age complain a lot about the town where they live.” Finding ways to engage at the local level matters.

Several groups came up with strategies for bringing in revenues from multiple sources. Fund-raising dinners, as nonprofits like MinnPost do, could feature special guest speakers and enable news staffers to interact directly with members of the community. Live events, such as a New Yorker-style Meet the Writers gathering, could generate income at the more elite publications. Some tech publications have done full-blown cruises with writers and paid attendees, and Make magazine holds a series of Maker Faires. Publications could sell books — say, the top news stories and features of the year. Photojournalists could offer to sell portraits that they took during Little League games and local assignments. And newspaper archives should be plumbed for rich troves of still-relevant reviews and profiles.

Rich Skrenta, a co-founder of Topix.net who is now developing a new search engine, headed up a breakout group that urged newspapers to use the collective knowledge of their journalists for commercial purposes. Consulting firms bring in hundreds of thousands of dollars with reports, and the expertise gathered through local reporting can be repurposed to create reports and studies of value to local and national businesses.

But there were clear divisions on how far news publications should go in tapping new revenue streams. Said one session leader: “How do you monetize trust without corrupting it?” He cited the example of bloggers in Los Angeles who collaborated on an investigative report of vegan restaurants — without compensation. “How do you compensate them without corrupting them in the process?”

There was a sense that the days of professional writers and editors cranking out polished copy may be coming to an end. Skrenta suggested enlisting the most popular local Yelp reviewers to become a featured food critic for a publication like the Bee.

Another participant suggested a crowdsourced model akin to the Wikinews model of publish first, then curate. “I wish there was a set of smooth, transparent tools for peer reviewing where you can say, ‘I’m publishing this story, but it’s not perfect and I need your help,’” he said.

As several speakers observed, the goal of the two-hour exercise was not to prop up newspapers’ outmoded business models, but to find a way to sustain journalism.

Not all participants were on the same page. “We concluded it was important to get rid of print product,” one session leader said of the group’s decision to close the print edition of the San Francisco Chronicle, which brings in the lion’s share of revenue to pay its journalists. Others said the evolution from print to online must happen concomitantly.

In the end, what was left unsaid was the reality that making a living as a journalist is about to get a lot harder, and that the news business is already being bifurcated into a shrinking elite of professional journalists alongside a burgeoning ecosystem of bloggers, hobbyists and amateurs who write and report for very different reasons.

Masnick pointed out that the Future of News and Civic Media Conference at MIT this week is tackling many of the same issues explored here. What’s clear is that there’s no single solution to the how-do-we-pay-for-journalism problem, and that gatherings like the one at Google will dot the landscape for years to come.

J.D. Lasica is a consultant, strategist, public speaker and author. He runs Socialmedia.biz, a social media consultancy for businesses, and Socialbrite.org, a learning hub for nonprofits. CNET named him one of the 100 top media bloggers in the world. You can follow him on Twitter at @jdlasica.