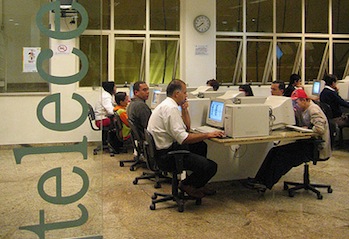 A view inside a Brazilian Telecentro. Photo by Henri Bergius via Flickr

It wasn’t your typical keynote address.

Earlier this month, at an event held on the campus of Cornell University, a room of people gazed at a blank screen in rapt attention, listening to a woman speak over a weak cell phone connection originating in Cuba.

A new wave of online media is promising to challenge the Cuban status quo."

The speaker was Cuba’s 32-year-old star blogger, Yoani Sanchez. The event was the seventh annual meeting of Roots of Hope, an organization founded by Cuban-American students that aims to promote cultural exchanges with the island. Its April meeting was specifically focused on new media. (I was invited as a panelist.) Attendees had been told that the keynote speaker would be a surprise. After a nail-biting series of dropped calls, the attendees were thrilled to hear Sanchez finally come on the line.

Sanchez told her U.S. audience how she had assembled her personal computer by foraging for discarded components, and devised an online publishing strategy that relied on scarce computers, cell phones, and flash drives. Last year, her blog posts and tweets earned her a spot on Time magazine’s list of the 100 most influential people in the world.

Sanchez epitomizes the Cuban online community’s ingenious response to the dual restrictions of government censorship and the U.S. trade embargo. Some call it the “hacker mindset.” In the same fashion that Cubans manage to keep the chassis of 50 year-old old Chevys on the road, a small but growing Cuban tech community has learned how to go online against the odds.

Thanks to cooperation from other countries in Latin America, a new attitude in Washington, and the work of NGOs, Cuba may be poised to make big online strides.

When Fidel Castro took power in Cuba 51 years ago, he launched a revolution that has been fueling controversy ever since. Supporters lauded Cuban advances in health care and education, while detractors condemned the government’s heavy-handed measures against everything from private enterprise to gay rights.

The Cuban paradox extends to the media. Although Cuba has achieved one of the highest literacy rates in the hemisphere, it also has earned the most dismal record on freedom of expression. The government controls all news media, and takes harsh measures against any domestic or foreign journalist who steps out of line.

It’s not surprising that digital media have been slow to get off the ground in Cuba. They have been woefully hampered by Cuban government censorship, but another major factor has been the decades-old U.S. embargo, which has starved the island of the technologies necessary for modernization.

Something of a double standard has been at work: At the same time Communist countries such as China have been transformed by economic investment and educational exchanges with the U.S., Cuba has been left as an isolated backwater. Only 3 percent of Cuba’s 11 million citizens have cell phones, giving it the lowest cell phone penetration in Latin America. It also has one of the lowest Internet penetration rates. The government’s restrictions on cell phone ownership and Internet access have further limited communications, often making them a privilege for the party faithful.

Today a new wave of online media is promising to challenge the Cuban status quo — and surprisingly, some of the changes are the result of government initiatives. The first one is a fiber optic cable currently being laid between Cuba and Venezuela. It’s expected to be completed within a year.

Another new development is arriving by way of Brazil’s “Telecentro” program. Telecentros are public computer labs that use open source software and provide free Internet access. They are designed for poor and under-served communities and have been a wild success in Brazil. Ten thousand of them are scheduled to be in service in that country by the end of the year. Brazil is now exporting the model to Ecuador, Venezuela, and Cuba, aiming for a total of 52,000. The Cuban Telecentros are mainly designed to support primary education, but they are available after hours to other community members.

Open source software is playing a key role in the Telecentros. Ryan Bagueros, the owner and founder of NorthxSouth, a software development company that describes itself as a “network of open source developers from all over the Americas,” said Brazil and other Latin American governments are unenthusiastic about the high cost and security leaks of U.S.-made proprietary software. (Bagueros joined me on a panel at the annual meeting of Roots of Hope.) He noted that these Latin American countries are investing heavily in developing open source alternatives, and expanded via email about the value of open source software:

The emphasis on open source is helping to stimulate a Latin tech boom, with the Brazilian tech industry poised to reap substantial advantages. It’s too early to predict the impact, but the initial signs are intriguing. Not only have the Latin governments saved millions of dollars on software, but the open-source Telecentros are creating new generations of pre-teen software developers in the favelas.

During our session, Bagueros predicted that this phenomenon could be particularly interesting in Cuba. He reported that embargo restrictions have created a generation of “engineers who are good at ‘reverse engineering’ software for donated medical equipment” and other devices. The combination of hacker ingenuity, loosened government control, and dramatically increased bandwidth and access could lead to big things, fast, in Cuba.

New Winds from the North

In the past, tensions between Cuba and the United States have complicated every development in communications. The Bush Administration has been criticized for politicizing media development by supporting groups seeking to overthrow the government. One private contractor, dispatched to secretly hand out cell phones and laptops in Cuba, was arrested for espionage last December

The Obama administration is experimenting with a different approach. In March, the Treasury Department modified trade sanctions to allow the export of social media and related technologies to Cuba, Iran, and the Sudan. In combination with the upcoming technological advances, this move could energize online Cuban freedom of expression, and provide the first real alternative to Cuba’s geriatric official news media. (Though it’s important to note that the administration recenlty took something of a harder line with Cuba.)

At the same time, new initiatives are appearing in the Cuban-American community. One of the initiatives supported by Roots of Hope is an ongoing cell phone drive called Cells4Cuba.

“[Politically,] I’m to the right myself,” said Miguel Cruz, a Cells4Cuba activist from the University of Texas. “But these cell phones are for any youth in Cuba, no matter what their politics.”

Roots of Hope has enlisted the support of Cuban-Americans ranging from Gloria Estefan to Perez Hilton, and its membership represents a variety of political perspectives. Its stated goal is to open a dialogue between youth in Cuba and the U.S., and the organization sees social media as a perfect conduit.

Social media won’t change the contentious nature of the Cuba debate, and the new developments raise as many questions as they answer. Will the Cubans and Venezuela’s mercurial Hugo Chavez attempt to control the data stream on their fiber optic cable? Will Cuban officials try to emulate China’s army of Internet censors to control content, trace dissidents, or conduct online espionage? Will Latin American tech initiatives find new ways to harness digital media for social goals? What role will Latin America’s open source initiatives play in shifting political alignments?

However these issues play out, it’s clear that so far, Cubans have energetically taken advantage of every new online opportunity that’s come along — and that’s not likely to change.