WikiLeaks, Bay Citizen, and Lessons from the Logan Symposium 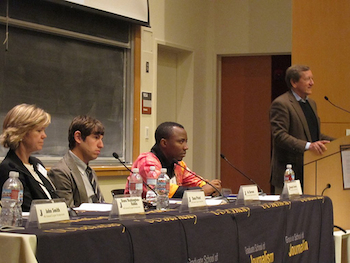 A panel disucssion at the Logan Investigative Reporting Symposium. Photo by Chris O'Brien

Over the past two days, I had the pleasure of attending the 4th Annual Reva and David Logan Investigative Reporting Symposium. If you want a blow-by-blow account, check out the live blogs from Day 1 and Day 2.

Now that I’ve had a chance to catch my breath, I want to reflect on what I heard (and what I didn’t hear).

For the most part, the gathering was flat out inspiring. The folks here are doing the hardcore, courageous investigative journalism that takes on powerful interests, asks vital questions, and in many cases puts their finances, their safety, and their health on the line.

This is also the stuff that’s most at risk as business models collapse, as newsrooms cut staff, and audiences fragment. At times, as I listened to many of the elder statesmen of journalism recount war stories, I felt like I was being taken in a time machine back to a recent age that has long since ended. If you saw the movie “State of Play,” which was in fact the theme of the symposium this year, then you might have some sense of what I mean.

And yet, here were many of these same folks gamely trying to chart a new course. There wasn’t much hand-wringing about the problems (as in past Logan Symposiums). But there also wasn’t much consensus on how to move things forward.

On a Saturday panel about collaboration, everyone agreed that there should be more. And thanks to organizations like ProPublica, there is. Throughout the weekend, there was a heavy representation of non-profit news organizations that didn’t exist even a year or two earlier. Whatever one thinks of the wisdom of these models, I take it as a positive sign that people are moving past the talking phase and into the doing phase.

Jonathan Weber, the new editor of the Bay Citizen, the non-profit news organization being developed in San Francisco, said the reason people like him (who had previously been critical of the non-profit model) were coming around to this model was simple: There is no private capital available from investors to fund organizations that will primarily pay journalists. There’s money for things like aggregation, but not journalism.

But as well as ProPublica has done so far, it’s still never going to plug all the holes at the national level, and it doesn’t pretend it will. What concerns me more is the lack of resources at the local level. In theory, organizations like Bay Citizen will start to plug some holes there, but what I heard from that corner left me more concerned about the direction of the nascent organization.

We heard from two representatives from Bay Citizen: Weber on Sunday, and CEO Lisa Frazier on Saturday. For all the time they had on stage, I still couldn’t tell you exactly what it is, or what it aims to be. And for the most part, Weber and Frazier either couldn’t, or wouldn’t, say. For an organization that at some point is going to be asking for public support and donations, I expected more transparency in order to build confidence and trust.

Frazier, facing some tough questions from Slate’s Jack Shafer, couldn’t say anything about what the organization’s strategy was for grassroots fundraising, or why Weber had changed his mind about non-profits. (“You can ask him tomorrow. He’ll be here tomorrow morning,” she said to Shafer.) And when Shafer asked why he should donate money to the Bay Citizen, she rattled off some statistics about the number of journalism jobs lost and reduction in content. But there was no sense of what the organization’s core mission was. She still sounded more like a McKinsey consultant rather than a visionary leader of a revolutionary news organization.

Weber shed a bit more light on things Sunday — but only just a little. They won’t be using students from the Graduate School of Journalism at UC-Berkeley as slave labor. There will be some paid internships. They will develop some investigative projects and innovative journalism projects through classes at the school. And of course, the Bay Citizen will produce two days of local content for the New York Times.

But what stories will they cover with their 15 employees? How will they be presented beyond the New York Times? Weber said we’ll just have to wait and see once they get started. I found that attitude a bit baffling. If he were building a for-profit enterprise, sure, keep your secrets. But as a non-profit that will be seeking collaborations and donations, it would seem wise to be sharing the process and communicating a vision and purpose as soon as possible. Or perhaps the vision hasn’t been clarified yet.

If there was one big surprise for me, it came on Day 2 with the appearance of Julian Assange of WikiLeaks. Assange took us behind the operations of WikiLeaks. He was tough and passionate. I didn’t necessarily agree with everything he said. And there will no doubt be times in the coming months and years, as WikiLeaks pushes the boundaries, that they will do things that will cause wide-ranging discussions about ethics in this new age.

But meeting Assange left me assured that WikiLeaks is being led by someone who is thoughtful, visionary, and yes, a journalist. “Leaking information is an act of anarchy,” Assange said.

The good news is that Assange is taking a measured and responsible approach, rather than coming off as a zealot. For instance, he acknowledged that at first he hoped that by putting everything they got online, the crowd would help filter things, discover what was legit or not. “It’s bullshit,” he said. Now, WikiLeaks employees and volunteers vet information and sources before posting information.

WikiLeaks has structured its organization and its technology to be located in many jurisdictions so it can dodge the worst legal threats. Essentially, WikiLeaks is trying to use the tricks multi-national corporations use to avoid taxes and regulation to protect themselves.

“We built the organization from the ground up to be un-sue-able,” he said.

It was a good way to end the weekend, hearing from a thoughtful journalism anarchist. It left us with a taste of the way new technology could in fact be a catalyst for new and powerful forms of investigative journalism.

Chris O’Brien is a business and technology columnist at the San Jose Mercury News where he has covered Silicon Valley for 10 years. He was also a recipient of a Knight Foundation News Challenge Grant in 2007 to research and design the newsroom of the future.

One response to “WikiLeaks, Bay Citizen, and Lessons from the Logan Symposium”