Merging Online, Broadcast at NewsHour Still a Work in Progress 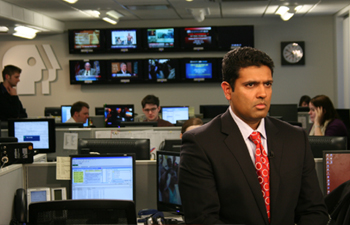 Hari Sreenivasan records the news summary in the newsroom.

About two months have passed since we officially became the PBS NewsHour. I wrote my previous update for MediaShift” just after the two staffs — broadcast and online — merged into one building and were getting used to having each other around. But, really, how merged have these two teams become?

The initial good news is that, after our re-launch and re-design, we saw an increase in audience both on air and online.

We still are not yet on the same page in terms of producing content online that is directly in synch with the broadcast product." - Hari Sreenivasan

The presence of our new online/on-air correspondent Hari Sreenivasan — who is connecting the two platforms in a whole new way on our Rundown blog — and the fact that more on-air correspondents are contributing to the site are big improvements in a very short time.

That’s the external side of the story. Internally, the merging process continues and there’s more to be done.

The staff formerly known as online is now integrated into the broadcast team. We share meeting times, contact lists and broadcast duties. Though staffers within the beats still tend to gravitate to their online or broadcast duties. While more and more broadcast people are contributing to the website at the conceptual and content levels (see the web dispatches from our reporting team Haiti, for example), it’s generally the online staff that are doing a good deal of the reporting and production.

So often in public media we talk about “resource issues,” which often translates to having the proper amount of staff to complete the workload. Luckily, in our case, the missing resource is not creativity, experience or passion. The task ahead is finding a way to create a streamlined, sustainable operation as we try to cover the news as an organization — not a website or a TV show.

“We still are not yet on the same page in terms of producing content online that is directly in synch with the broadcast product,” Sreenivasan told me in an email. “But there are occasions where online is almost a test-bed for guests and editorial ideas that the show is starting to adopt.”

State of the Union Coverage

As an example, take a story that was well-covered by both the broadcast and online fronts: President Obama’s first State of the Union on January 27. That evening, the broadcast had special live coverage of the 9 p.m. speech anchored by Jim Lehrer, with post-speech analysis from columnists Mark Shields and David Brooks.

As in the past, we offered complimentary coverage online and live-streamed the video of the broadcast special (with the help of NPR) on our site and on station sites. Another vestige of prime-time events past was that members of the online staff, including Sreenivasan, were the last to leave the building, well after the broadcast coverage signed off the air.

There were several online efforts that brought the team into work early and kept them late: Our call for video responses to the speech on YouTube, producing content for our blogs, and our efforts to solicit video reactions from Capitol Hill. We also produced an annotated text of the speech, which included reactions from multiple experts and analysts. This was a unique project for us.

So how did the annotated speech project come to be? The concept was pitched by interactives editor Chris Amico (read his notes on the project) and art director Vanessa Dennis. After the online team kicked around the idea, it was presented by Maureen Hoch, our managing editor for digital news, to the broadcast’s executive producer, Linda Winslow.

NewsHour’s annotated State of the Union

In the past, we may have alerted the broadcast to such a plan, but might not have had a direct editorial debate about its merits. This is one example of the editorial workflow (or signoff) merging to push an innovative online idea into reality. The chain is longer — but it also goes higher up. This challenges us to have top-notch ideas that are well-executed.

After we received the green light, a team of reporter producers — largely from the old online team — were assigned to find experts. Some from the broadcast team pitched in with ideas of whom to talk to, and how to get the right mix of voices, and we had some extra hands to help make the project happen on SOTU night. This project received some great attention and outside coverage for doing what the NewsHour does best: adding analysis and context.

Small Gains But More to Come

“I think the successes are easy to spot,” Sreenivasan said. “People came to us for information on Haiti in a way that they never had during any major breaking news story since the inauguration. In a short period of time, we are slowly changing the perception of the NewsHour website — we are making it a destination for people searching for news throughout the day.”

One huge internal step is that our broadcast counterparts now pay detailed attention to what we’re doing. The site has become more transparent. The whole staff is now invited to be involved with the site as we continue to develop our digital strategy.

You’ll notice that it still appears as though there are two teams at the NewsHour. It will take more time, more understanding and more training to truly merge. A couple of months is too short of a time to get all the way there — but we’re getting closer every day.

3 responses to “Merging Online, Broadcast at NewsHour Still a Work in Progress”