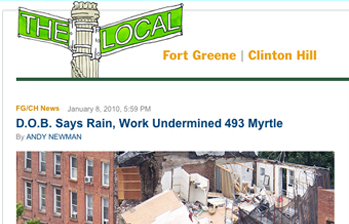 The pace of change for hyper-local news sites and related businesses is dizzying.
It’s hard to keep up, especially if you try to pay attention to business moves made by large players, as well as innovations that bubble up from local, independent news sites.

This year already began with large companies and investors making moves into hyper-local news. At the same time, experiments with foundation money continued, such as J-Lab’s Networked News project. J-Lab also announced another request for proposals for grants for community news startups with a deadline of March 1, and proposals that support or create local news sites have advanced into the second round of the Knight News Challenge. Winners will be announced in June.

A key source for information on the big business moves in local news sites is paidContent.org, which focuses on the business of digital media.
And if you are looking for analysis and trends among independent sites, a great source is Michele McLellan, a fellow at the Reynolds Journalism Institute at the University of Missouri. McLellan is researching community news startups, civic engagement and community building. She also writes for the Knight Digital Media Center’s leadership blog and is @michelemclellan on Twitter.

With change coming at such a rapid pace, it’s important to take stock of some of the most notable developments from recent weeks and months. Here are the five biggest recent moves in hyper-local news.

Datasphere, the company that has helped Fisher Communications of the Seattle area set up and sell a network of hyper-local news sites to compete with local bloggers, announced it has raised $10.8 million in funding. That number is large compared with the common figures of $1 million or $2 million for other local news ventures, and Datasphere’s approach stirred up resentment among local, independent bloggers. Datasphere’s website also details partnerships with Cowles Media for a hyper-local network in the Monterey and Santa Barbara markets in California, and with Fisher Communications in Portland and Eugene, Ore.

Outside.in, the hyper-local aggregator of blogs and other news sources, also raised a large chunk of money: $7 million in Series B funding, announced in early December. CNN took a stake in the company and will feature feeds from Outside.in on its website, using Outside.in for Publishers. The aggregator, based in Brooklyn, N.Y., also has agreements with other publishers to provide feeds to their sites. In addition, Outside.in is hiring, and has a new community manager active on Twitter who is sharing and soliciting information from local sites.

The U.S. Local News Network is partnering with the Los Angeles Times for its third local site, covering Orange County. The companies will cross-sell ads and share content. U.S. Local News Network staffers will work out of the Times office in Costa Mesa, according to the paper. For more background, check paidContent’s in-depth reporting on the network, which plans to roll out to 40 more cities during the next two years. The president of the company is Chris Jennewein, former online head of the San Diego Union Tribune. His experience includes time with Greenspun Interactive, Knight Ridder, including the San Jose Mercury News and the Mercury Center, and the Atlanta Journal-Constitution.

The New York Times is expanding its collaboration with City University of New York’s Graduate School of Journalism=”. CUNY will now assume day-to-day editorial leadership of The Local, the Times’ community website serving residents of Fort Greene and Clinton Hill, N.Y. Journalism school faculty will serve as editors and work with students to enlist residents to cover news.

The work is supported by the Carnegie Corporation of New York, the McCormick Tribune Foundation and the John S. and James L. Knight Foundation. Another Times Local site serving Maplewood, Millburn and South Orange, N.J., remains under the Times. Founding editor Tina Kelley was among the journalists who took a buyout from the Times in December. Replacing her is Lois Desocio, a local resident who recently received her master’s in journalism from CUNY.

Patch.com, a startup of networked hyper-local sites bought by AOL in May 2009, has listed job postings for regional publishers in San Francisco, Los Angeles and Washington, D.C.=, editorships in California, and other positions in Boston and Chicago.