Is It Legal for an Editor to Unmask an Anonymous Commenter? 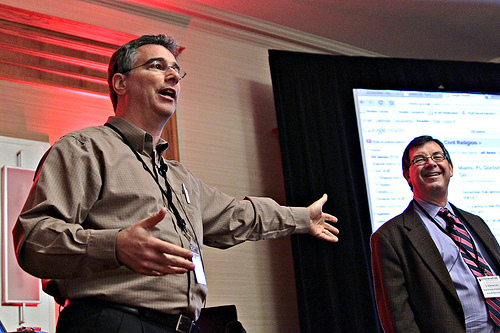 On November 13, the St. Louis Post-Dispatch’s website, StLToday, asked readers to comment on a story titled, “What’s the craziest thing you’ve ever eaten?”

Soon, a commenter posted a reply that included a “vulgar, two-syllable word for a part of a woman’s anatomy,” according to an online account by Kurt Greenbaum, the paper’s director of social media. Editors at the website promptly deleted the comment, only to see the commenter repost the same word just a few minutes later.

There is nothing that stops a website, legally, from deciding that there are some things that shouldn't be published." - Tom Curley

What happened next has been the subject of discussion and debate within the world of online journalism.

For his part, Greenbaum summed it up in the title of his blog entry about the incident, “Post a vulgar comment at work, lose your job.”

Greenbaum, who declined to be interviewed for this story, soon published another blog post explaining his actions. He admitted that he may have overreacted by calling the school, but stated, “I am constantly frustrated by the difficulty of dealing with this kind of language” on the paper’s website.

Greenbaum’s blog entry was republished on the Post-Dispatch’s website and has received over 450 comments. In an angry response, an anonymous person created a website mocking Greenbaum, repeatedly calling him the same “vulgar, two-syllable word for a part of a woman’s anatomy” that started everything.

Aside from the ethical debate about this incident, there are two important legal questions to consider.

Can He Do That?

The first question: Is what Greenbaum did legal? Answer: yes, probably.

The paper’s privacy policy states that the Post-Dispatch and its employees “will not share individual user information with third parties unless the user has specifically approved the release of that information.”

Tom Curley, an attorney with the media law firm Levine Sullivan Koch & Schulz, said that the legal rules surrounding comments and message boards “can vary widely from site to site.” Curley said some websites may provide an absolute promise to not reveal any identifying information, while others may offer only conditional promises.

Additionally, websites are a form of private property, and can be managed as such.

“There are some websites that are open forums, which is perfectly fine,” Curley said. “But there is nothing that stops a website, legally, from deciding that there are some things that shouldn’t be published.”

In his blog post, Greenbaum stated that the Post does not routinely “take the steps I took in this case. For particularly bad cases of abusing our guidelines with vulgarity and obscenity, we would not rule it out.”

Malcolm Moran, a professor of media ethics at Pennsylvania State University, questioned Greenbaum’s approach. “The main ethical question I would raise in this case is: When does an editor decide the rules change?”

“What happens if a person comments about a controversial issue and has legitimate reason for staying anonymous?” Moran said. “Next time, will an editor identify that person if he or she disagrees with the commenter’s views?”

Attacking the Editor with Anonymous Speech

The second legal question is whether Greenbaum can sue the anonymous individual who created a website ridiculing him. The likely answer: no.

The anonymous website created in Greenbaum’s name is vulgar, to say the least. But that does not make it defamatory. In order to sustain a lawsuit for defamation, a plaintiff must show that the words in question state or imply false facts. Simply calling an individual a degrading name does not imply a fact at all. Rather, it is a non-actionable figure of speech.

Thomas Dienes, a professor at George Washington University Law School, said the mocking website may be in bad taste, but is not defamatory. “This case would be thrown out of court so fast that I can’t imagine a lawyer would take it,” Dienes said.

“Over the years, there have been a number of these types of websites devoted to a particular reporter. It’s rare but not unheard of,” Curley said. “Normally, the reporter just shrugs and it all blows over.”

“The tradition of anonymous speech in this country is incredibly important,” Curley said. In fact, media organizations themselves have noted the importance of confidential sources and anonymous speech.

Two Supreme Court cases, often referred to as Talley and McIntyre, have affirmed the idea that “an author’s decision to remain anonymous…is an aspect of the freedom of speech protected by the First Amendment.”

Although this constitutional right only exists in the context of government regulation, the importance of anonymous speech, even if it is in the form of an anonymous comment on a news outlet’s website, still holds its importance.

That does not mean, however, that all anonymous speech on the Internet is free from liability.

Recently, plaintiffs in New Jersey, South Carolina, and California asked judges to subpoena the identifying information of anonymous bloggers and commenters in order to sue them. The frequency of these types of subpoenas has reached a dizzying pace.

Generally speaking, courts have taken two different approaches in determining when to reveal the identity of an anonymous blogger or commenter. First, some courts require that a plaintiff make a “good faith” showing that the he or she has a viable lawsuit before a judge will subpoena any identifying information. These courts offer anonymous speech a particularly low level of protection, believing that everyone should have their day in court.

A second group of courts require that higher standards be met before an anonymous poster is revealed. These courts employ either the Dendrite test or the Cahill tests, as they are commonly known. The Dendrite and Cahill procedures require plaintiffs to show a litany of factors before receiving any identifying information.

The law concerning what you can and cannot anonymously publish on the Internet is undergoing change on almost a daily basis. This back-and-forth has left the legal state of anonymous speech on the Internet as uncertain at best.

5 responses to “Is It Legal for an Editor to Unmask an Anonymous Commenter?”