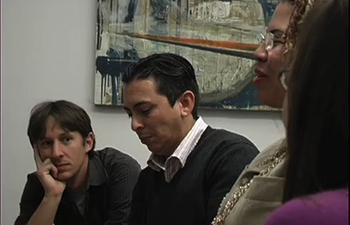 There’s a new series of demands being made in company meetings everywhere: “What is our social media strategy? What are we doing on Facebook and Twitter? I want followers and fans, and I want them now!”

But before companies large and small — as well as non-profits and charities — jump into social media, they need to take a deep breath and think about it. What are their goals? What kind of return on investment will they get? Even though it’s free to set up fan pages and feeds, there’s a time investment that may or may not pay off.

The real opportunity is restraint. There's a reason why people had publicists in the first place. Sometimes we have to protect ourselves from ourselves." - Brian Solis

On this episode of 5Across, I convened a group of social media marketers and publicists who’ve had success (and mishaps) in creating campaigns on these platforms. They’ve worked with non-profits, helped street food vendors, gotten authors on Twitter, and spread viral videos on YouTube. Hear their advice on doing social media marketing right, learn how to avoid common pitfalls, and find out how to manage the expectations of clients who want popular social media channels, but don’t know why.

Cheryl Contee is a partner and co-founder of the social media consultancy Fission Strategy, where she specializes in online advocacy, engagement, and communications. Prior to Fission Strategy, Cheryl was vice president at Fleishman-Hillard San Francisco and acted as lead digital strategist for the West Coast. She also helped launch 40 multi-lingual websites for Discovery Communications. Cheryl serves on the board of Netroots Nation and chairs the board for CommonGoods.net. She writes as Jill Tubman for the award-winning black political blog JackAndJillPolitics.com, which she founded in 2006.

Jeff Pester is the founder of Text Capital, a developer of custom content delivery applications for social media platforms. He is also the creator and curator of @socialmedia411, with over 60,000 followers. He has substantial experience with broadcast-oriented Twitter accounts in the media/entertainment vertical. Jeff also provides strategic advice to other corporate and non-profit organizations interested in identifying best uses of the Twitter platform.

Laura Pexton is the publicist for Peachpit. She manages public relations and social media for the Berkeley-based publisher of books and videos on graphic and web design, photography, digital video, all things Mac-related, and more. She has developed multiple strategies for increasing visibility, brand loyalty, and warm fuzzy feelings among readers. Prior to Peachpit, Laura’s background includes communications and marketing experience for a range of industries, including professional sports (L.A. Dodgers), non-profit, and education.

Brian Solis is recognized as a thought leader in social media. Solis has influenced the effects of new media on the convergence of marketing, communications, and traditional media. He is principal of FutureWorks, an award-winning new media PR agency in Silicon Valley, and has led interactive and social programs for Fortune 500 companies, notable celebrities, and Web 2.0 startups. Brian’s blog, PR 2.0, can be found here.

Caleb Zigas is director of operations at La Cocina, a non-profit that helps female food entrepreneurs. Zigas runs the popular @StreetFoodSF Twitter feed covering street food vendors in San Francisco. He began working in kitchens in his hometown of Wash­ington, D.C. and has been working with the food industry ever since. With a degree in glob­alization, Caleb interned at Pro Mujer, in El Alto, Bolivia, working with microentrepreneurs in the country’s fastest growing city.

If you’d prefer to watch sections of the show rather than the entire show, I’ve broken them down by topic below.

Non-Profits and The Little Guy

Thanks to Vega Project for hosting 5Across

What do you think? What has worked for you in marketing using social media? What lessons have you learned? Share your thoughts in the comments below.