Online Reporters in Malaysia Struggle Against Jail, Fines and Filters 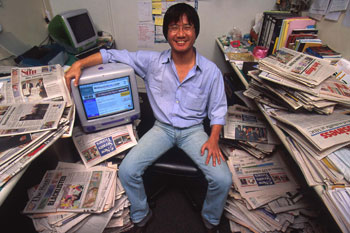 Malaysia ranked No. 132 out of 173 countries on last year’s edition of Reporters Without Borders’ World Press Freedom Index, which means it’s already a hostile place for reporters. Thanks to recent initiatives aimed at controlling the flow of online information, the country appears ready to tighten its grip on the Internet, too. But bloggers and web journalists continue to fight bravely against new and existing constraints.

Online free expression is a complex issue in Malaysia because the authorities tend to regard the Internet as an opposition medium. As a result, independent online news sources such as Malaysiakini are forced to deal with fines and jail time.

Independent online news sources such as Malaysiakini are forced to deal with fines and jail time."

Malaysiakini was started in November 1999 and remains one of the only truly independent sources of news in Malaysia. As a result, it continues to face government pressure. On September 3, the Malaysian Communications and Multimedia Commission told Malaysiakini in a letter that it considered two of its film clips “offensive” and “intended to upset people, and particularly the Indians.” (The letter cited the “Communications and Multimedia Act” of 1988).

These video clips are only accessible to subscribers to the site. The first, from August 28, shows demonstrations by Malay Muslims against the building of a Hindu temple in their neighborhood. The demonstrators spat on and trampled the bloodied head of a cow, an animal that’s sacred to Hindus. The second video, from September 2, features Interior minister Datuk Seri Hishamuddin Tun Hussein speaking at a press conference during which he urged demonstrators not to use violence. He also defended their right to protest. The next day, he changed his policy and ordered judicial proceedings against the demonstrators. This helps explain the government’s sudden objection to an otherwise innocuous video.

For not complying with the order to remove these videos, Malaysiakini endured a three-day investigation that included interrogations of the entire staff, the copying of the hard drives of the two computers used to edit online video, and a demand for the original film. The penalty for refusing to comply with the government order is a fine of 50,000 ringgit ($14,325 dollars) and one year in prison.

This is not the first time Malaysiakini has been targeted by the government. In June, the government temporarily banned its journalists from entering parliament. In 2003, it was subjected to an investigation after publishing a letter that was critical of the government

Malaysiakini’s editor, Steven Gan, said that their “intention was not to do any harm, but to do our job as journalists.”

Other online reporters have also faced pressure form the government. The well-known blogger Raja Petra Kamaruddin, also known as RPK, was put in jail for “spreading confusion” and “insulting the purity of Islam” after he reported about the involvement of a member of the government in a murder. The Internal Security Act under which he was held states that: “If the minister is satisfied that the detention of any person is necessary with a view to preventing him from acting in any manner prejudicial to the security of Malaysia or any part thereof or to the maintenance of essential services therein or the economic life thereof, he may make an order directing that person be detained for any period not exceeding two years.” The detention order can be renewed indefinitely.

The Internal Security Act was also used to arrest P. Uthayakumar, who posted a letter www.policewatchmalaysia.com online asking British Prime Minister Gordon Brown to help improve the rights of Hindus in Malaysia. He was jailed for a year and a half and was finally released in May. For his part, RPK still faces defamation and sedition charges in connection with articles posted on his Malaysia Today blog.

Internet filters on the way

When he came into power in April 2009, Datuk Seri Dr. Rais Yatim, the minister of information, communication and culture, said his ministry played an important role in ensuring that only the right kind of information reached the masses. He said the communication department within the ministry would monitor the media to watch for what it considered twisted facts or untruthful postings.

On August 7, he confirmed the administration is looking at installing Internet filters to prevent people from accessing “undesirable” websites, such as those that contain pornography. The minister said bloggers would continue to be held accountable by existing laws, which include the aforementioned Internal Security Act.

“It is understood that four companies have sent in proposals for the Internet filter with a decision expected to be made in December by the National Security,” reported the Malaysian Insider.

Dr. Rais Yatim said the government was conducting a study to gather opinions from parents about the impact of negative materials on the Internet. The results are expected to be ready in three months. By using national security as a reason to curtail free speech, Malaysia is taking the Chinese approach to Internet regulation. (One difference between the two countries is that only 26 percent of Malaysians were connected to the Internet as of April 2009, while China has the highest number of Internet users worldwide.)

What this means is that independent online reporters in Malaysia will soon face either jail, fines or filtering when trying to report the truth.

One response to “Online Reporters in Malaysia Struggle Against Jail, Fines and Filters”