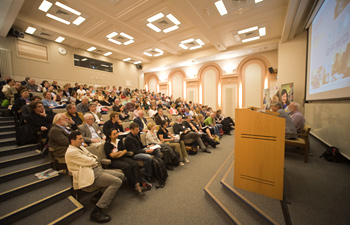 Attendees gather at the Future of Journalism conference

The ability of anyone to play an active role in the process of collecting, reporting, analyzing and sharing news and information is seen as one of the big shifts in journalism over the past 10 years.

But a growing body of research suggests that the advent of participatory journalism, or user-generated content (UGC), has done little to change the way the media works.
At the recent Future of Journalism conference at Cardiff University, academics presented a series of studies that further illustrated how the mainstream media is trying to tame the phenomenon.

There are very few signs that news organizations are reinventing their relationship with the audience and tapping into the participatory potential of the web.

The research paints a global picture of how journalists are seeking to maintain their position of authority and power, rather than create a more open, transparent and accountable journalistic process that seeks to work with readers.

One of the studies looked at the BBC, which is considered a pioneer in the field of user-generated content. The BBC has 23 people working in its UGC hub, up from just three in 2005, and receives thousands of comments and emails every day along with hundreds of photos and videos.

Researchers Claire Wardle, Andrew Williams and Karin Wahl-Jorgensen interviewed BBC journalists in 2007. What they found was that BBC staff see UGC as a part of newsgathering operations; basically, it’s a way of obtaining photos and video, eyewitness accounts or story tip.

The researchers concluded that UGC has become institutionalized at the BBC as a form of newsgathering, consolidating the existing relationship between journalists and the audience. They did find some examples of BBC journalists that view it as a way to collaborate on stories, or as a shift towards networked journalism. But these views existed at the edges.

This institutional approach towards UGC was reflected in the BBC course on the topic, entitled “Have They Got News for Us.” This session at the conference focused on how to scour comments, pictures and video from the public in order to separate the wheat from the chaff, rather than on how to collaborate with the audience on stories.

No News in Comments

Finding newsworthy material in contributions from the public is a challenge. In his study about Dutch newspapers and UGC presented at the conference, Piet Bakker found that there was little news contained in comments on stories.

From the point of view of the traditional journalist, the amount of news in comments was minimal. Instead, comments were seen as a way to attract more visitors and increase loyalty, but these benefits were counterbalanced by problems with abusive comments, a lack of contributions, and the cost of moderation.

This ties in to another conference paper that looked at the attitudes of journalists in the U.K. when it comes to user-generated content. In interviews with local journalists working for the Johnston Press, Jane Singer found that most see the public as complementing, rather than replacing, the work of professionals. The journalists saw themselves as UGC gatekeepers, citing concerns about the quality of contributions and legal liabilities.

This approach is understandable at a time when the local press in the U.K. is in trouble. Journalists may feel under even more pressure to justify why amateurs cannot replace them, or offer meaningful contributions.

Singer found that local journalists saw a theoretical value in participatory journalism in that it’s a way to promote democratic discourse. But another paper presented by Marina Vujnovic on behalf of an international group of researchers that included myself found that this ideal did not figure highly in the minds of the online editors of newspaper websites. They instead look to UGC to drive traffic, increase loyalty, and provide free content for their sites.

The Audience as Audience

These were just a few of the more than 100 papers presented in Cardiff. But they illustrate how the mainstream media is attempting to limit and control how much the public can contribute to its journalism. These studies suggest that as far as journalists and editors are concerned, the people formerly known as the audience is still known as the audience.

The space for the audience to participate in journalism is, by and large, clearly delineated. The public can send in their news tips, photos and videos, but the journalist retains a traditional gatekeeper role, deciding what is newsworthy and what isn’t. There is little room for the public to be involved in the actual making of the news — in deciding whom to interview, how to frame the story and how to produce it. Once the story is complete and published, the audience can freely comment on the final product.

An international study published in Journalism Practice concluded mainstream media is eager to open comments and post-publication discussion to the public, as this fits in with their definition of the audience as audience. But forms of pro-am or networked journalism are rare.

Online journalism is still in its infancy and it will take time for journalistic attitudes to change. But there are very few signs that news organizations are reinventing their relationship with the audience and tapping into the participatory potential of the web to reimagine journalism.

13 responses to “Mainstream Media Miss the Point of Participatory Journalism”