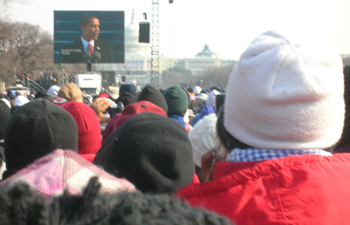 Professional communicators are paying close attention to the rise of “direct to consumer” (DTC) communications. This is a phenomenon largely enabled by the rapid proliferation and adoption of online technologies, whereby organizations can communicate directly to the public without filters or mediation from the press. Corporate blogs or advocacy groups’ online “action alerts” are just a couple examples. As a former political staffer, I’ve been attentively watching the application of DTC tactics by political candidates and elected officials — a variation on the DTC theme that I call “direct to constituent” communications.

I just returned from Washington where I proudly witnessed Barack Obama sworn in as our 44th president. Impressed as I was with the throng of people surrounding me, my thoughts turned to my friends who were watching the ceremonies in another way. With over 21 million people streaming on CNN.com alone, the way in which people witnessed the inauguration was as transformational as the man being inaugurated.

The perennial ritual of the inaugural speech itself was nothing if not a quintessential example of this direct-to-constituent communications."

This post, however, is not so much about how technology is treating our government, but how government is treating our technology. Much has been made about the Obama campaign’s massive email list, with more than 10 million registered email addresses. My friend and former Kerry campaign colleague Ari Melber put it this way:

It enables direct communication at a remarkable scale. The next President can instantly address 16 percent of his national supporters, based on the popular vote. To put it another way, the list dwarfs the audience of all the nightly cable news shows combined.

While he correctly characterizes the enormity of this asset, many people neglect to acknowledge the limitations of a distribution list that only reaches people who are already ideologically predisposed to agree with the new administration. Whereas a television news audience reaches — and can influence — people of all political stripes, I’d argue that this e-mail list will be a tool more useful to activate supporters than to communicate broadly to Americans.

Furthermore, if people who supported Obama’s campaign receive more frequent and relevant messages from the new administration, it’s possible that the cyber-balkanization phenomenon theorized by Cass Sunstein (himself an Obama supporter and friend) will play out. Sunstein argues that when media consumption becomes fragmented, niche media (blogs, cable news, partisan magazines) begin eclipsing the popularity of “general interest intermediaries” (legacy newspapers, network news, newsweeklies), and people start seeking “on demand” news that is customized to their own interests and ideologies. As this happens, the media consumer is exposed to fewer headlines and opinions that challenge their existing beliefs and attitudes, and more headlines and opinions that reinforce them. Consequently, public opinion becomes more polarized.

The White House’s new media operation will inevitably become a media company (to echo Andrew Heyward, former president of CBS News, who said that “Every company is [now] a media company”). It will be interesting to see whether they attempt to reach an audience beyond their campaign supporters and address broader issues of importance to that broader audience.

In addition to the Obama administration’s massive email list, the new president will be able to bypass the traditional media filter and communicate directly with the citizenry through his weekly address, which will be broadcast via YouTube (just as his weekly addresses went up on YouTube as president-elect).

Not to be outdone, the U.S. Congress partnered with YouTube earlier this month and launched two new platforms, the Senate Hub and the House Hub that provide easy access to congressional YouTube channels.

It will be interesting to see who among our elected representatives will embrace this new platform. Already, many channels have been criticized for not allowing comment threads. I’d argue, however, that this should be judged more as an experiment in DTC than participatory communications. While the Obama transition team and the State Department have allowed comment threads to their YouTube videos, there’s a reasonable debate afoot about whether public comments add to the dialogue or create more noise.

Of course, many of my new friends from the Netroots Nation reception in Washington two weekends ago will be horrified to read any suggestion that one-way communication might be preferable to ubiquitous online conversation. My main point is that these channels represent a step forward in government communicators’ use of digital multimedia.

It also remains to be seen whether and how direct-to-constituent communications programs will fall under the jurisdiction of the Smith-Mundt Act, the post-WWII law that authorized several public diplomacy and strategic information initiatives abroad, but which prohibits the Executive Branch from distributing “propaganda” to Americans. This law is the subject of considerable debate in the world of public diplomacy, based mostly on the ambiguity of the term “propaganda” (Indeed, the famous Rosie the Riveter and “Uncle Sam — I Want You for the US Army” posters could be reasonably construed as propaganda under a wide-ranging definition).

It will be interesting to see whether some conservative commentators will claim that any communication with a persuasive tone should be prohibited from being directly communicated to the American public from its government.

Of course, this is all merely academic. “Direct to constituent” communications is a present and inevitable part of the modern media patchwork. It is being propelled by new communications strategies and new distribution technologies. But it has history and heritage in the weekly radio addresses of Franklin Roosevelt and the famous television addresses of Ronald Reagan. And, as I stood with over a million of my closest friends on the National Mall on Inauguration Day, I realized that the perennial ritual of the inaugural speech itself was nothing if not a quintessential example of this direct-to-constituent communications.