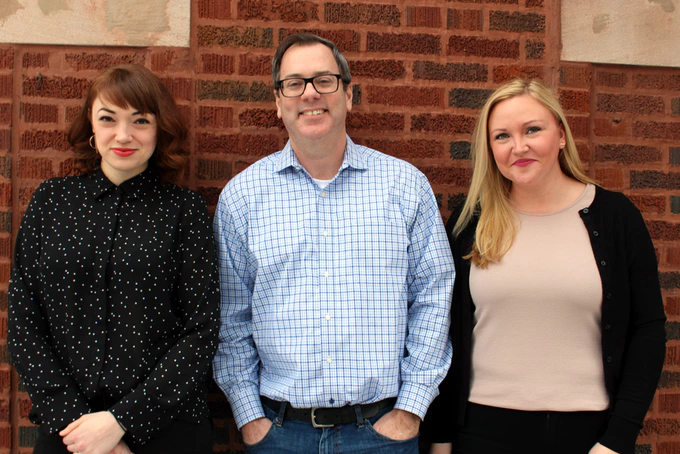 Jen Sabella, one of the co-founders of Block Club Chicago, joins the MediaShift Podcast this week. From left to right: Jen Sabella, Shamus Toomey and Stephanie Lulay

In the news this week, a mass shooting at YouTube was motivated by filtering and demonetizing videos about veganism and workouts. The video service was already dealing with disgruntled creators over filtering and now a shooting makes the situation even more fraught. Facebook tries to stem the tide of negative news by providing more context to news stories shared on the platform including Wikipedia entries, and Mark Zuckerberg will testify before Congress next week. And three-quarters of Americans believe the mainstream media runs “fake news” either with inaccurate or biased reporting. And I’ll go one-on-one with Jen Sabella at news startup Block City Chicago, which raised more than $180,000 on Kickstarter and will be part of the new Civil blockchain journalism crew. All on this week’s MediaShift Podcast!

Sadly this is our final MediaShift Podcast. Changes are coming to MediaShift, with more to be announced this coming Monday…

“Local news is not a big money game anymore. It’s just really frustrating to watch these newsrooms suffer because management thinks it’s going to be or they throw away the day-to-day local reporting to pivot to videos.” - Jen Sabella

Jen Sabella is a co-founder and director of strategy at Block Club Chicago. She was deputy editor and director of social media at DNAinfo Chicago, a site she helped launch in 2012. Before that, she was HuffPost’s Chicago editor and a breaking news reporter at the Chicago Sun-Times.

While YouTube has been furiously trying to filter its videos to deal with a rise in conspiracy theories and hate speech, ironically its filtering seems to have led to a mass shooter coming to its headquarters. And the shooter was an Iranian refugee woman, Nashim Aghdam, who was upset that her vegan activist and workout videos were age-limited and demonetized, and called YouTube a dictator in protests. On Tuesday, the 38-year-old Aghdam went to YouTube and shot and injured three people before killing herself. Mountain View police came in contact with the shooter a day earlier after her father filed a missing persons report. In a statement, the police department said Aghdam made no mention of YouTube or indicated her plans to harm herself or others. Aghdam’s brother told CNN affiliate KGTV he warned the police department his sister might do something at YouTube because she was upset with the company.

There are many strange twists and turns in the story. As the New Yorker’s Nathan Heller pointed out, YouTube couldn’t even cover its own story as it unfolded, as the campus was on lockdown. Also, in the midst of the shooting, the Twitter account of YouTube product manager Vadim Lavrusik’s was hacked and started posting false information related to the shooting. After it was flagged by reporters, Twitter removed the false tweets. And as per usual during breaking news, a flood of misinformation came onto Twitter, tracked by a BuzzFeed reporter, Jane Lytvynenko, who was eventually named as the shooter herself by one Twitter troll. The shooting happened right at the heart of misinformation and conspiracy theories, and was itself a victim of the same problem.

Facebook has had a rough couple weeks, and while the company is trying its hardest to turn the tide, there are still fires to be put out. Earlier this week, a BuzzFeed report unearthed a June 2016 memo by Facebook VP Andrew “Boz” Bosworth that defended the company’s data collection practices. In it, Bosworth wrote that “maybe someone dies in a terrorist attack coordinated on our tools,” but he justifies this further down in the memo saying connecting people is a de facto good. The memo, titled “The Ugly,” shows that Facebook does understand the physical and social risks the platform’s products carry. After Buzzfeed broke the story, both Mark Zuckerberg and Bosworth made public statements distancing themselves from the memo.

One of the moves Facebook has made recently to address misinformation is a new plan to show users more context about articles posted to the platform, including the publisher’s Wikipedia page. The contextual information will also include related articles, and a look at how the story has been shared across Facebook. Also, Mark Zuckerberg will be testifying before Congress next week to answer questions about the Cambridge Analytica data scandal. The social giant now says the rogue firm had access to data of 87 million users instead of the 50 million initially reported. Zuckerberg has been on an apology tour of media, and on the latest episode of The Ezra Klein Show podcast, the Facebook honcho said it will likely take years to solve its issues. Zuckerberg said that, “As the internet gets to a broader scale and some of these services reach a bigger scale than anything has before, we’re constantly confronted with new challenges.” But this time, the challenge is right at the core of Facebook’s business: targeted advertising. Whether Facebook can come up with a way to safeguard data, stop the flow of misinformation, and still continue to bring in billions in ad revenue is a critical question for the future of the company.

Last week, Deadspin released a video, which later went viral, showing anchors from local news stations owned by Sinclair reading a statement about “one sided news stories.” And while Sinclair may be trying to inoculate themselves against accusations of bias, more than 3/4 of the American public believe mainstream news outlets engage in purposely reporting fake news, according to a new Monmouth University poll. The poll found that 65% of people believe “fake news” includes editorial decisions as well as inaccurate reporting. The belief that mainstream media reports fake news is up among all ideological groups. About 40 percent of the public say the reason news media publish “fake news” is to push an agenda. In addition, 8-in-10 believe outside groups are trying to plant stories in mainstream media and 9-out-of-10 say the same is happening on social media platforms.

Patrick Murray of the Monmouth University Polling Institute said that, “These findings are troubling, no matter how you define ‘fake news.’ Confidence in an independent fourth estate is a cornerstone of a healthy democracy. Ours appears to be headed for the intensive care unit.” Of course, we can’t talk about fake news without speaking about President Trump. Monmouth also surveyed Americans about the president’s relationship with the media and roughly half say that both the president and the media have been hurt by it. When asked who they trust more, Trump or the media, Americans said they trusted the media, with ABC News in the lead. But the numbers change if you look only at Republican respondents with over half trusting the president vs. ABC News and other outlets.

CBS is trying to buy out Viacom but its first offer was rejected for being too low.

Streaming music site Spotify had a direct public offering of stock, with the price down 10% on its first day, but it hit a value of nearly $27 billion.

Thousands of Google workers are asking the tech giant to pull out of an artificial intelligence project for the Pentagon.

And an experiment at the Bay Area News Group found that users were more willing to pay for subscriptions if they could keep their ad blockers on.