Without Net Neutrality, News Organizations Could Pay the Price 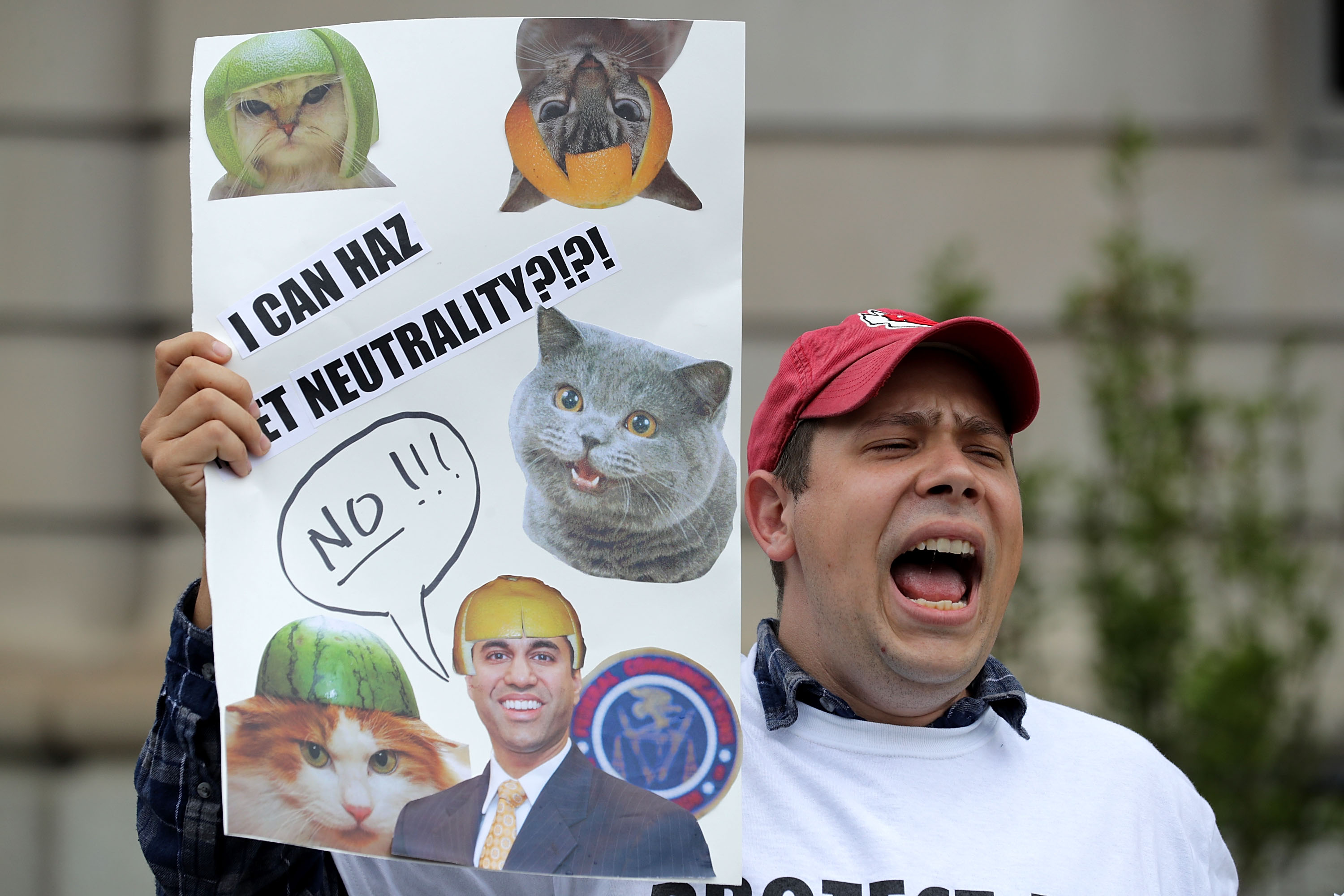 Proponents of net neutrality protest against FCC Chairman Ajit Pai outside the American Enterprise Institute before his arrival May 5, 2017 in Washington, DC. (Photo by Chip Somodevilla/Getty Images)

This article previously appeared in the Medium publication of the Global Editors Network, and is cross-posted with permission.

The never-ending debate on net neutrality is back in full swing and we’re wondering how the issue affects journalism.

"The ability for ISPs to shut down access to sites by blocking them, or excluding them from certain packs, is effectively an act of censorship, and thus a violation of free speech."

We spoke with Nikhil Pahwa, editor and publisher at MediaNama, George Brock, former head of the Journalism School at City, University of London, Dan Gillmor, professor of practice and director of News Co/Lab at Arizona State University’s Walter Cronkite School of Journalism and Mass Communication, and José Legatheaux, president of the Internet Society Portugal chapter to examine how net neutrality affects media diversity, free speech, and innovation not just in the US, but in India and Portugal.

The comparison of these media ecosystems seems pertinent as we anticipate the FCC’s decision on  December 14: India has potentially “the world’s strongest” net neutrality rules, while Portugal has recently come under fire for its non-neutral internet package deals.

For those who need a quick recap: net neutrality is the principle that internet service providers (ISPs) treat all data equally regardless of its source. ISPs don’t have the power to slow down the loading time of any websites or block them, even if, for example, the sites are a competitor of a subsidiary of the given ISP.

“What’s at stake for everybody is whether we’re going to end up in a situation in which we’re completely at the mercy of the carriers or whether we retain some control on communications ourselves. It’s really troubling because in the US — we’re losing,” says Gillmor.

Without net neutrality, ISPs can sell packages or bundles of sites to users. In order to be included in more popular or cheaper packages, publishers could be forced to pay ISPs a fee.

“Larger news businesses would be able to strike a deal with an ISP for preferential treatment to the exclusion of smaller news businesses,” says Pahwa. For example, Verizon, a US ISP that owns HuffPost, could potentially allow the news website to load faster or make it cheaper for users to access than other news sites.

Pahwa runs a bootstrapped independent publication, which he said he would never have been able to launch in a non-neutral environment.

“Net neutrality has allowed universal, guaranteed distribution, and allows us to compete with larger, established media firms on the basis of their reportage and content.”

Publishers who host videos or interactives, which require a lot of bandwidth, would likely have to cough up more in a non-neutral web environment. This might discourage publishers from posting videos, which could harm their strategies as video is a key driver of trust. It could also make them think twice about experimenting with new forms of multimedia content, consequently slowing innovation.

Moreover, page load speed and engagement are critically linked, according to Cait O’Riordan, chief product and information officer at the Financial Times.

“If you can make the site a second faster, you can drive engagement by five percent,” O’Riordan told Nieman Lab’s Shan Wang. “And we know that engagement is the key thing that drives everything else. It drives whether someone will take out a trial subscription, it determines how many adverts they see. So much of our revenue is driven by how engaged people are.”

Managing the cost of keeping up with competitors whose pages load faster will be much tougher if you’re a smaller, independent newsroom. This could also drive up costs for the consumer: Having to pay the ISP a premium rate to have access to video-rich Coda Story, for example, would depress the opportunity for consumption and, consequently, the total rate of consumption.

“That’s the bad effect,” says Brock. “If you remove the insistence that everything must be treated equally, you would in the medium or long run, if not instantaneously, reduce opportunity for publishing.”

A free speech issue: The fewer choices there are, the bigger the problem becomes

“Net Neutrality is a free speech issue: the ability for ISPs to shut down access to sites by blocking them, or excluding them from certain packs, is effectively an act of censorship, and thus a violation of free speech,” points out Pahwa. Gillmor adds that it is possible that we will see a substantial curtailing of some speech and that there might be “certain voices chosen as the preferred ones” once net neutrality rules have been repealed. He points out that a “picking of winners” is already going on today as a result of Google and Facebook, who control so much of the landscape where speech occurs.

But it could very well get worse.

“A small number of companies dominating our access to the internet represents a communications choke point, moreover, and Trump sounds entirely capable of using it. Suppose Trump quietly asks the bosses of the biggest internet service providers to block or degrade transmission of content he finds objectionable, and threatens dire consequences if they don’t. At this point, expecting corporate courage may be expecting way too much,” Gillmor wrote on Slate.

The case of India: how the battle for net neutrality has paid off

In the US, even Obama’s Open Internet Rules have left wiggling room for zero rating. A recap: zero rating is the practice of mobile operators not charging end users for certain applications and services. India, however, has taken a more rigid stance on net neutrality in November 2017, banning zero rating in the process, which is particularly of note seeing as 80 percent of internet users in India access the internet through mobile.

“The Indian regulator has said that Internet access needs to be non-discriminatory in a country where almost 100 million Indians are coming online each year: ISPs should not be allowed to shape what people read, view, or create,” adds Pahwa.

Facebook’s Free Basics app caused uproar in India, with contributions from comedians bringing the debate into popular culture. Free Basics is simply “another way for Facebook to monopolize the internet, so that every new user in India only uses Facebook,” Karan Talwar succinctly pointed out in a video.

Another recap: Free Basics is a mobile app giving users access to a selection of data-light websites (no photos or videos) for free, in an effort to bring more people online and, according to Facebook, “improve their lives.” It was withdrawn in 2016.

Pahwa says that the problem with the service is that it effectively gave Facebook the power to select which sites are part of the offer, creating a pull for websites to sign up, only for them to have to play by Facebook’s rules.

“This ends up shaping user experience, and keeps people within the Facebook ecosystem,” says Pahwa, pointing to a breach in net neutrality. “We’ve seen it with publishing to Facebook pages. Facebook have deprecated reach for news content over the past few years, and monetized it by making publishers promote their posts, despite the fact that users have chosen to like that page, and want to receive their content. If you’re forced to play by Facebook’s rules, you know that once they have enough players as partners, they can change the rules, and add a distribution cost to your business. No single publisher has sufficient negotiating power against the platform and we will also see that in play with Instant Articles.”

His view is that if Facebook actually wanted to do good and provide people with internet access, they should have given free data like Mozilla did in Bangladesh and some parts of Africa, as part of their Equal Ratings program. Ellery Biddle, advocacy director of Global Voices, also told the Guardian, “Facebook is not introducing people to open internet where you can learn, create, and build things […] It’s building this little web that turns the user into a mostly passive consumer of mostly western corporate content. That’s digital colonialism.”

The Savetheinternet.in campaign, which included the battle against Free Basics, managed to encourage over a million people to write to the Indian Telecom regulator in support of net neutrality.

“The scale of the campaign led to debates on TV, newspapers, online media, and even debates in colleges. There was regular coverage for a full year after the campaign, until the regulator came to a decision,” says Pahwa.

The hard work clearly paid off. Since the first net neutrality rulings came out in 2015, a new large telecom operator has entered the Indian market. According to Pahwa, this has led to:

“This shows that you don’t need to violate net neutrality to increase internet access,” concludes Pahwa.

The BEREC (Body of European Regulators for Electronic Communications) guidelines on net neutrality are not clear on zero rating either, says Legatheaux. In Portugal, a viral tweet about telecommunications company MEO has drawn global attention to net neutrality (or apparent lack thereof) in southern Europe.

Is it fair to say that there is no net neutrality in Portugal?

“That statement is not entirely correct,” says Legatheaux. “There are no access blocks or throttling of any content for users with good internet connections.” In Portugal, the main problem is at the level of mobile internet instead. Access to mobile data is expensive and many bundled offers have been introduced into the Portuguese market where certain sites and services are zero rated, leaving publishers that are not included in these offers at a loose end.

“Almost all network operators are also intermediaries for paid TV channels,” Legatheaux adds. “[Bundling] is the model they are used to and would like to adopt in the mobile internet.”

What’s being done to challenge power in Portugal?

Unfortunately, the topic isn’t widely discussed. According to Legatheaux, Portuguese media have mostly ignored the issue and independent content production has “little strength.”

As a net neutrality supporter, Legatheaux says that zero rating is something he fears and that little has been done overall to monitor or adopt European regulations on net neutrality, which have been in place for about a year.

“In my opinion, network operators in Portugal are all against a model in which they may no longer function as the only privileged intermediaries for content access,” says Legatheaux. “I think that most network operators also act as resellers of Netflix.”

Freia Nahser is a news and innovation reporter at the Global Editors Network.

One response to “Without Net Neutrality, News Organizations Could Pay the Price”