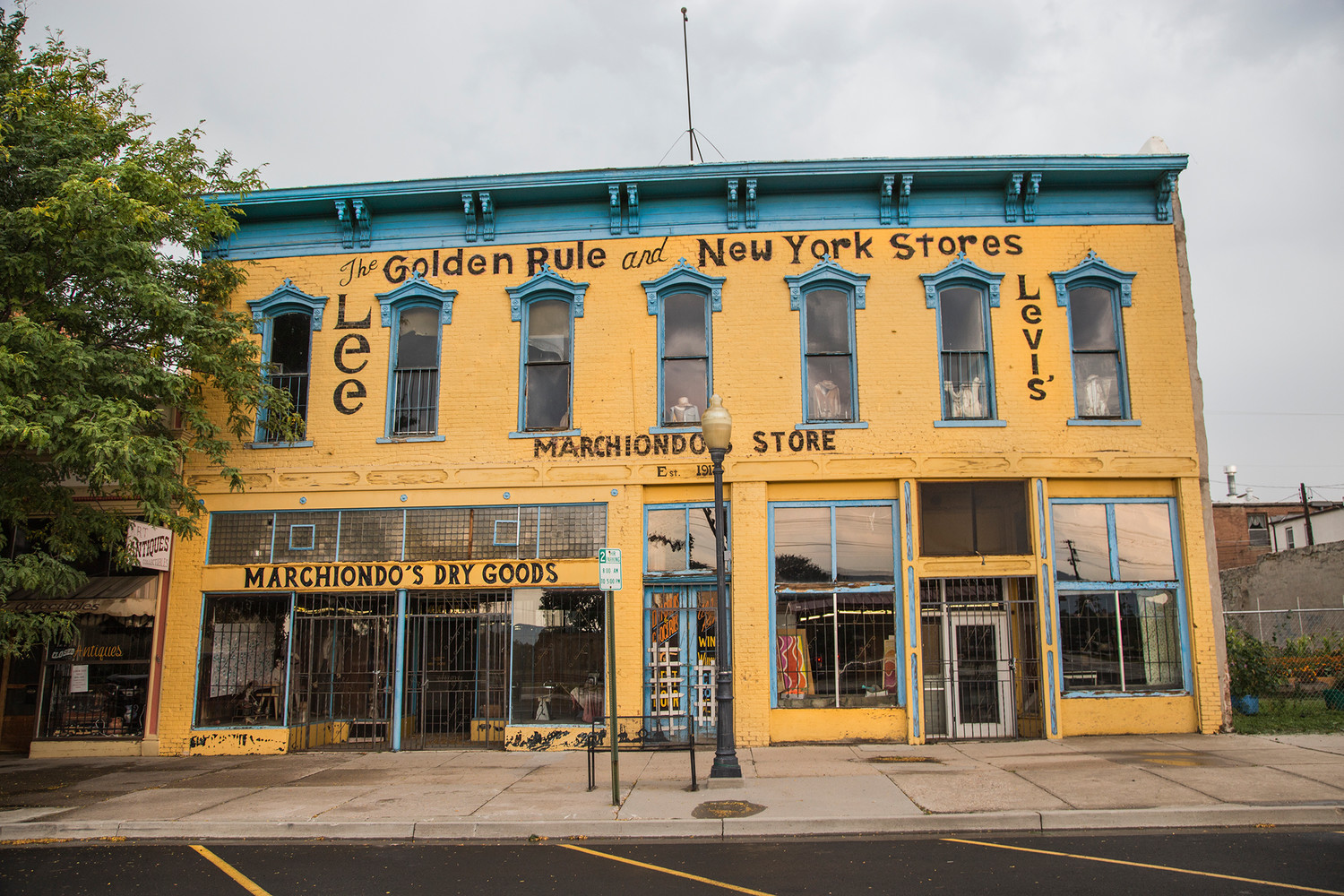 The old Marchiando mercantile, built in 1882, sat vacant for more than 30 years until recently. (Photo by Jane Phillips/Taos News)

“Why save the small town?”

“It's all building up to what we hope will be an ecosystem of newsrooms up and down the mountains west, that regularly share story ideas.” - Leah Todd

It’s a headline that the High Country News ran in a series of stories on issues facing rural communities in New Mexico. The series is part of a multi-year, evolving collaborative project that started in 2016 as Small Towns, Big Change and is now getting ready to publish as a new project in Montana. The project connects small newsrooms in rural communities with each other to better cover local issues in areas with limited news coverage.

The sustainability of rural life and the future of rural communities are the overarching themes of the project’s coverage, with stories on economic development, immigration, health and education. A set of stories around addiction in New Mexico led to national coverage of the state’s challenges with the crisis. Other stories have led to local action around education and economic revitalization.

These collaborations in the rural west are the work of Solutions Journalism Network, a non-profit journalism organization which sought to partner with small newsrooms away from the big cities and coasts.

Since it began in 2016, the projects have been a case study in community-focused reporting that’s responsive to the unique needs of its communities, and frequently reinvents itself based on those needs.

The Solutions Journalism Network‘s mission is to rebalance the news, so that every day people are exposed to stories that help them understand problems and challenges, and stories that show potential ways to respond.” The goal is to identify and report not only on problems, but also on their solutions.

To build out Small Towns, Big Change, Mountain West regional coordinator for SJN Leah Todd began by spending six months on the ground across three states, and researching areas the network identified as possible locations. She convened focus groups and interviewed community members, local politicians and local newsrooms about how news worked for them in their communities. This research, and the 34-page report created from it, served as the foundation for the original project.

Small Towns, Big Change consisted of seven newsrooms across Colorado and New Mexico reporting on issues specific to their rural communities. The project published from May to November in 2016.

The following year, after reflecting and collecting feedback on the project, Small Towns evolved into State of Change, a 10-newsroom collaborative in New Mexico that further reported on challenges in the rural southwest.

Now the project is a yet-to-be-named collaborative in Montana, with 12 newsrooms partnering to cover rural issues in Montana. They are slated to start publishing in January.

“Our long-term goal, and the way that I see our work in the Mountain West is that we are trying to create long-term muscle memory, capacity and community around good solutions journalism in this region,” she says.

Betty Kelly is in her 90s and works on the North Leupp Family Farm most days, growing the food she eats all year long. Kelly was interviewed for a story on how the Navajo Nation in Northern Arizona was looking to farming as a more sustainable option than traveling long distances to grocery stories. (Photo by Marisa Demarco/KUNM)

The project is supported with funding from the LOR Foundation, a non-profit that aims to put western communities at the center of decision-making about their own futures. The funding covers staff from SJN, a partnership with High Country News to add editorial support and data support from Headwaters Economics. Newsrooms can also request funding to support reporting travel or audience engagement efforts.

Nick Ehli, an editor with the Bozeman Daily Chronicle, is participating in the Montana project. He currently has a reporter in Bend, Oregon reporting on a nearby community that has a challenge Bozeman also faces: much of the working population commutes into town from surrounding communities.

“We would’ve never done that without Solutions Journalism. We might’ve thought it was a good idea. But with budgets being what they are, it would’ve been a tough sell,” Ehli says.

The Daily Chronicle has 2 of its 6 reporters working on stories for the collaboration. Ehli says the appeal of participation was the openness about the reporting focus.

“That they didn’t come in telling us what the big story was in Montana was something I was looking for,” Ehli says. “They’ve almost been just a facilitator with this bigger group working together, keeping us on track, setting our deadlines, offering up financial assistance when needed.”

Ehli says it has been a novel experience to be working in collaboration with papers he historically viewed as competitors.

“We’re not only collaborating on this project, but it’s also helped open up those lines of communication,” he says. “I think this has made it easier for us to holler out to each other and say, ‘Hey, can we use a story of yours?’”

A worker at Rocky Mountain Metals grinds a hollow metal frame door. The company is more than three decades old, surviving through Raton‘s economic downturn. Raton was the focus of a story on the community’s effort to reinvent itself after the town’s major employer- a coal mine – shut down. (Photo by Jane Phillips/Taos News)

The Solutions Journalism Network tracks story impact with their a tracking tool built for them by the Center for Investigative Reporting. The tool records policy changes resulting from stories and other impacts on the ground level. Co-publishing is also recorded, tracking who publishes what, how many stories are picked up by national and regional organizations and when someone picks up a story from the High Country News distribution site.

Todd highlights local coverage about addiction issues in the Southwest that came before the national reporting as an example of high impact reporting in the region. Another story about education efforts for migrant students prompted a college professor to ask the reporter for help connecting him to those involved in the efforts in order to start a recruiting program at his school.

Another type of impact these projects have had is that some participating reporters say they feel more connected to their colleagues.

Melody Martinsen is the editor of the Choteau Acantha in Choteau, MT, a newspaper that’s been publishing for 119 years. Martinsen and her husband Jeff have owned and run the paper for the last few decades.

“For 27 years, I’ve been both a reporter and an editor, and a copy editor…the whole deal,” Martinsen says. “It’s a relatively lonely position, in that you don’t have that collegiality of a news room around you.”

Martinsen says that the Choteau Acantha signed on to the Montana project after talking to Leah Todd and a visit from Keith Hammonds, the President of Solutions Journalism Network. Hammonds visited many of the partners during the invitation phase of setting up the collaboration.

They decided to participate based on the opportunity for professional development and potential benefits to the paper’s audience. She says collaborating was a way to connect the community to a large-scope project with potential for high impact.

Beth Saboe, the News and Public Affairs producer for Montana PBS, represents the lone broadcast partner in the Montana project. That means her partners can’t offer her help in the same way as they do each other, Saboe says. Still, she was excited to engage with a solutions journalism project and to meet and work with other journalists in the state.

“I called the Choteau editor and said, ‘Okay, I’m coming up. Who should I talk to?” Saboe says. “That kind of information was so valuable. It’s like you’re having people on the ground to kind of do your pre-reporting for you a little bit.”

Collaboration is not new to Saboe, who’s previously participated in public media driven partnerships. She says that these kinds of projects enable sharing and learning.

“As newsrooms get slashed left and right…it seems like we, as an industry, are suffering from a shortage of resources,” Saboe says. “I’m really happy to see that more of these collaborations are happening and more of these networks are taking shape.”

Deming High School teacher Omar Zamundo, from Mexico, teaches a dual language psychology course. Zamundo was interviewed as part of the State of Change Project’s coverage of immigration’s impact on job growth in the region. (Photo by James Hemphill)

Todd describes the three Mountain West projects as part of a larger endeavor.

“We are hopeful that these collaborations combat the kind of isolation that rural communities sometimes feel,” she says. “It’s all building up to what we hope will be an ecosystem of newsrooms up and down the Mountain West that regularly share story ideas and learn from one another about solutions journalism.”

Todd says that the key is to figure out what the desired outcomes are. Is the project about changing policy? Raising awareness? Improving the audience-news organization relationship? The answers to these question should shape the collaboration.

This means making a critical decision on whether partners will produce loosely-related stories around a topic, or whether they will pursue an organized examination of an issue and lead the audience through the narrative together.

“The former is easier, certainly, and requires less compromise. News outlets can still pretty much do exactly the stories they want, and contribute them to a collaborative,” Todd says. “But the latter, while harder, has at least the potential for higher impact and a greater sense of understanding of the issue on the audience’s part. Agreeing upfront as a group which direction the group wants and what’s actually realistic is important.”

Another key to making collaborations work is to be constantly collecting feedback from partners, figuring out what works and shedding what doesn’t.

“From everything down to the minor levels of how do we ping one another all the way up to how do we pick our next focus editorially, [it should be] built with the feedback of the newsrooms.”