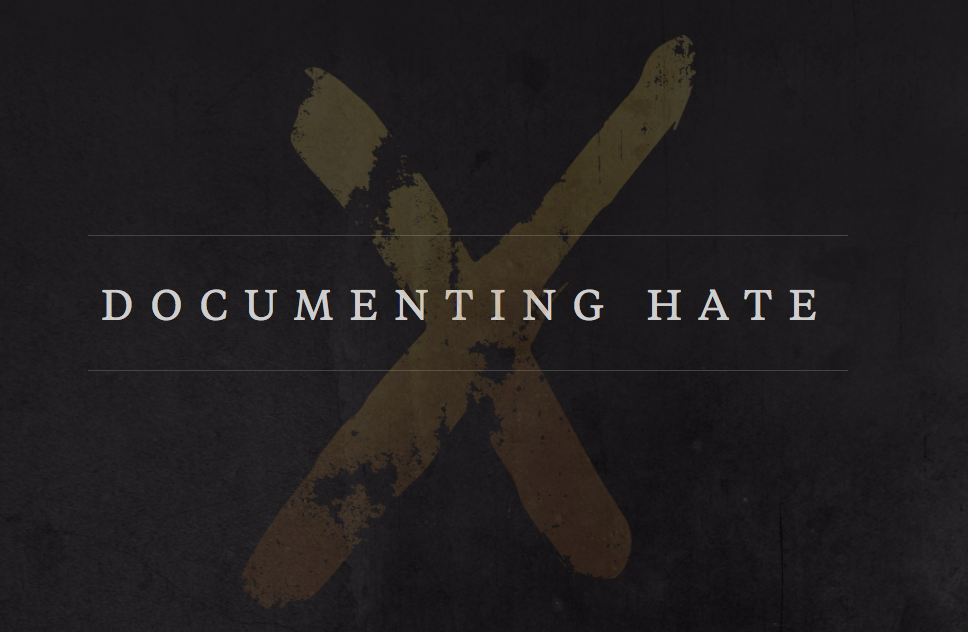 There are collaborations that come to life to report on vast troves of data and then there is Documenting Hate, a collaboration created to address an absence of data.

"We’ve had some very large scale stories come out of the project, either from ProPublica or from partners, that have been really important stories." -Rachel Glickhouse

In the wake of the divisive and racially-charged climate of the 2016 election, reporters found that reliable national data on hate crimes did not exist. With a grant from the Open Society Foundations to support their work, ProPublica created Documenting Hate to fill in those data gaps this past January. This collaboration of just over a hundred news organizations, technical partners, universities, civil rights groups and college newspapers has taught its managers critical lessons on collaborative journalism, including the importance of clear communication, flexibility, and having reasonable expectations.

Right away, partners were producing stories about the increase in verbal attacks, racist graffiti and assault and murders. Stories about xenophobia and racist speech from during and just after the election including one take from the Huffington Post that highlighted the many ways people were told to “Get out of America.” More recent stories have examined the lack of data and challenges around getting states and law enforcement to do better.

The newsroom partners vary in size and location and make up the core of the reporting project. A recent addition this fall brought on 11 college newspapers. First Draft Media, through their own grant, works on the project through partnering with journalism schools to look at what can be learned about hate crimes through through the lens of social media.

The shape of the project itself is not unlike that of a wagon wheel with a central hub both feeding and receiving information from partners along the spokes. Organizations participate by embedding a form the ProPublica built to collect user-reported instances of hate crimes from their respective audiences. All of that information along with data from law enforcement, community groups, news reports and organizations that track such instances go into the project’s database. Partners can access that database and look for information relevant to their reporting efforts.

Glickhouse also contacts organizations with tips and highlights of data that may be relevant for them.

While ProPublica itself reports on the topic, the majority of the reporting about specific local instances is done by newsrooms more local to the incident.

The ProPublica newsroom in New York. (Demetrius Freeman for ProPublica)

Building and optimizing a system

As partners come and go from the project, a priority for Glickhouse has been optimizing the onboarding process so that partners can quickly navigate the system and effectively use the tools available.

All partners are invited to the project Slack where the majority of communication happens. A Slack bot helps orient users with information on where to find things, what channels are relevant and points them to an FAQ and documentation. Partners participate in trainings on how to use the database and understand the data.

After onboarding, contact varies depending on how engaged a partner is or questions they might have. Each week, there’s a hangout office hours that partners can attend if they want additional contact or have questions to be answered.

Otherwise, flexibility is the order of things with interaction that happens as reporters work on stories.

Glickhouse focuses on being proactive about sending out tips and helpful information as she sees things come into the system.

“I try to make an effort as much as possible to give people helpful information that might be something that they can use, something that’s actionable for them,” Glickhouse says.

Involvement in the project ebbs and flows as information that’s relevant to an organization comes in. This flexibility allows partners to participate when it makes sense for them.

What does it mean to join a large collaborative project?

Most newsrooms can’t launch large collaborative projects, but joining an existing project can be a good option. However, it’s important to commit to projects focused on topics relevant to the organization.

“It should be something you know you are going to be working on. Not just your newsrooms, but you specifically. The point person for your newsroom should be the people on the beat,” Glickhouse says. She says communication is more effective when it’s between the reporters and editors that are actually working on the stories. With busy news cycles, trying to expand coverage outside of an organization’s regular beat often leads to being stretched too thin. Finding a project that works with what’s already being done to enhance coverage is a good onramp to collaboration.

When it comes to agreements and contracts, Glickhouse says it’s not always the right fit.

“I can’t imagine that for a project of this scale. Because there’s just too many people involved and too many wheels spinning to be like ‘you have to do this thing,’” Glickhouse says. “For me, the success of our project has been flexibility, that you don’t have to make anybody do anything. We give tips to people. They can take them, they can do with them what they want.”

Glickhouse points to that flexibility as a key to success.

“If you think of all the breaking news that happened from August to October. It was really rough for all newsrooms. When you have news cycles like that, you have to be understanding that people are just going to be pulled off. Everyone got moved to hurricane coverage at some point in September,” Glickhouse says. “If you think of 2017 as a news cycle, it’s crazy. The fact that we’ve gotten as much done as we have this year with the news cycle we’ve had, I think, is a great accomplishment considering all the things some of the reporters have had to deal with because they have been overextended beyond what is normal.”

Glickhouse recommends organizations take care to thinking about their time and opt into projects that make sense for them.

“I’d always like have more reporting than less, but I’d rather have better reporting and fewer stories than have more stories that are mediocre,” Glickhouse says. “We’ve had some very large scale stories come out of the project, either from ProPublica or from partners, that have been really important stories and they take longer and there’s fewer of them.”

She says it’s a common urge for projects to set high goals for how much can be produced but focusing on impact is a steadier route toward a successful project.

When it comes to impact, stories from the project have changed the way Cloudflare does business, removing support from neo-Nazi site, The Daily Stormer. A Buzzfeed series about hate incidents in schools generated more than a million pageviews and prompted attention from Chelsea Clinton, Rep. Judy Chu (D-CA) and the president of the national teachers’ union says Glickhouse. ProPublica’s in-depth reporting following Charlottesville help clarify what happened during the protests.

“I also think the Boston Globe’s bias incident story is really well done in showing how these incidents affect the fabric of daily life in communities,” Glickhouse says.

Success is Learning and Sharing

One of the things that the project had to figure out was how to communicate exactly what it was offering partners. The key is “making very clear what it is that you can give them and finding out if that is actually going to be beneficial to them,” Glickhouse says.

For the partners, the value comes from information that allows them to both drill down to the local level and also see the similarities between their communities and other places.

The data part of the project works so that tips that come from a specific outlet’s form is theirs first. If another organization wants to use that information, it’s coordinated by Glickhouse, who has been pleased by participants’ generosity.

“If they know they’re not going to work on it they’re like ‘oh, of course here, take the source for this particular tip,’” Glickhouse says. “We’ve had editorial calls where competitors talk about what they’re working on. We’ve had people want to work together to share information.”

Glickhouse emphasizes it’s not about having all of the answers on how things have to be done when it comes to collaboration. Reflection and refinement are key to success. “Learning as you go is perfectly fine.”