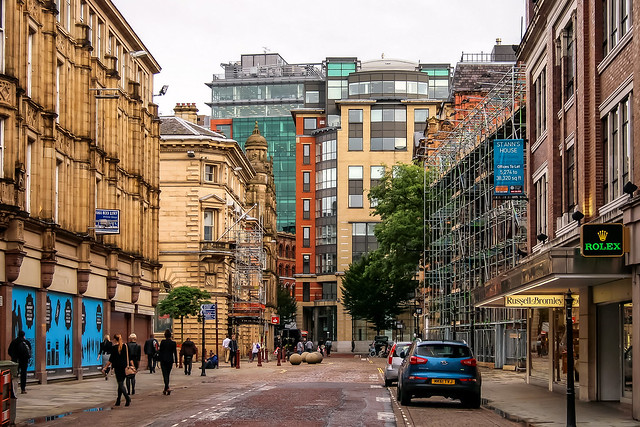 OtherWord.io offers residents of Manchester a new way to learn about their city. Photo of Manchester by Jorge Franganillo via Flickr Creative Commons.

Residents of and visitors to Manchester, England, have a new way to learn about the city. OtherWorld is a service that uses beacon technology – a signal emitted when a user approaches a certain location – to send local news stories to people based on where they are within the city. No app is necessary to access the technology, and anyone in Manchester with a smartphone can use it. Opting in differs slightly between iOS and Android, but mostly just entail users activating Bluetooth and turning on location services for Google Chrome.

Startup studio Like No Other is behind the project, and founder Stuart Goulden believes OtherWorld offers users a new way to engage with the world and hopes to expand to other cities in the future. The project has received funding from Google’s Digital Innovation Fund, which Goulden said, allows him to experiment with the project while working to develop a working business model. Rather than just accept ads, he envisions funding opportunities like working in conjunction with local news organizations, running tailored marketing campaigns for content partners or earning a commission on “positive” actions that OtherWorld users take via the platform.

OtherWorld, which is managed entirely by Goulden, now has 60 content partners, from the BBC to the National Football Museum. But operating the service has not been without challenges. The theft of a beacon, the impact of weather on users’ mobile phone habits and even Google’s recent update of Chrome have proven to be challenging, though manageable, obstacles.

“There is no instruction manual, but that’s the fun of being the first,” Goulden said.

We had a Q&A session with Goulden to learn more about OtherWorld and his goals for transforming local news. The interview has been edited for length and clarity.

What is OtherWorld? How does it work?

Stuart Goulden: OtherWorld is an experiment in next generation news. It uses beacon technology to magically send location-based stories to people’s mobile phones, without the need for an app. As such, it doesn’t need a news homepage or traffic from social media or search engines.

Strip away all the technology and the proposition is simple but powerful: It allows you to discover the nearest news to you now and explore the world around you like never before.

How did you come up with the idea for OtherWorld?

Goulden: From personal frustration and by asking an entirely different set of questions. There’s a whole generation of people, like me, who care deeply about where they live but will never read their local newspaper. OtherWorld is trialling something radically different for the sector that is more playful, relevant and made for mobile.

Google’s support for the trial (via their Digital Innovation Fund) means I have the luxury of not having to worry about business as usual and the freedom to think a few years ahead. Almost all of my work and start-ups look to bring an outsider and long-term perspective to more traditional industries.

Where do the stories come from?

Goulden: The pilot in Manchester has about 60 content partners, from the police and local council to cultural institutions and venues, and everybody in between. They’re clearly important for a regular flow of original stories. However, they also encourage their customers, residents and fans to activate the phones for the service. That contribution is priceless.

OtherWorld is an incredibly lean news ecosystem, with just myself running all aspects of the service for a large city the size of Manchester.

How do you work with partners?

Goulden: The relationship with partners varies enormously and some are also more active than others. At one of the spectrum are those looking to share their news with passersby and reach new audiences. At the other are organizations more interested in placemaking and encouraging active citizenship. OtherWorld meets a need for both.

Can you give examples of the types of stories you share?

Goulden: OtherWorld presents news, events and other alerts as highly targeted and relevant stories that are tied to a location. It could be anything from a police appeal about a crime nearby to letting you know about an upcoming festival or consultation, or encouraging people to volunteer for the soup kitchen that pops up where you’ve stood in the evenings.

One of the key learnings so far is that people value this geographical relevance over everything else – we don’t need to be the first to a story, have the deepest coverage on an issue or even the best photos or exclusives. The proximity of our stories means our readers are also better placed to act on what they read.

It’s important not to get too caught up in the editorial side of the pilot. OtherWorld is proof of concept for a new model of news distribution, discovery and monetization, and so it’s important to stay true to that. An obvious next stage of development would be to build more editorial resource or partner with an established news organization and test its real-time and two-way storytelling potential.

Why did you decide against building an app for OtherWorld?

Goulden: I don’t think the world needs another news app. By going app-less, we can speak to anybody with a smartphone and it shows the potential for real-time, location-based storytelling without the development time or cost.

How many users do you have?

Goulden: The record visitors for a single story on a single beacon for a single day is 700. That’s from a standing start with no existing readers or brand awareness. If you can imagine a city running a virtual newspaper with 100+ beacons, you can get a sense of its exciting potential.

How do you reach new users?
At this stage, it’s been achieved by encouraging our content partners to speak to their customers about the service. In doing so, they amplify our small marketing budget many times over. More recently, we’ve noticed more people serendipitously discovering OtherWorld because of Nearby Notifications on new Android handsets and the growing popularity of Bluetooth.

How does your business model work?

Goulden: OtherWorld is equally relevant to large news organizations who wish to reach new audiences in new ways and perhaps halve the average age of their readership, and smaller outfits who wish to resourcefully and quickly create a new news ecosystem from scratch for their local area. It also has a third life in digital placemaking, which transcends news and taps into revenue streams outside of advertising. Now that we have proof of concept, a number of conversations are happening about what happens next and I’m keeping an open mind. Ultimately, I’d love to see local news take inspiration from the pilot and to weave more location-based storytelling and discovery into their reporting. I think they’ll find it incredibly exciting and liberating.

What do you envision for the future of OtherWorld? Do you have plans for expansion?

Goulden: There are lots of opportunities to enhance the user experience and the technical backbone of the service. I’ve tried to think a few years ahead and keep the iterations short, with the initial pilot ending in December 2017. Ultimately, it would make sense to do this with an international news partner, who can roll it out to multiple cities and respects the trust that comes with beaming location-based stories to people’s mobile phones. A few conversations are happening and I’m keeping an open mind as to where they take me.