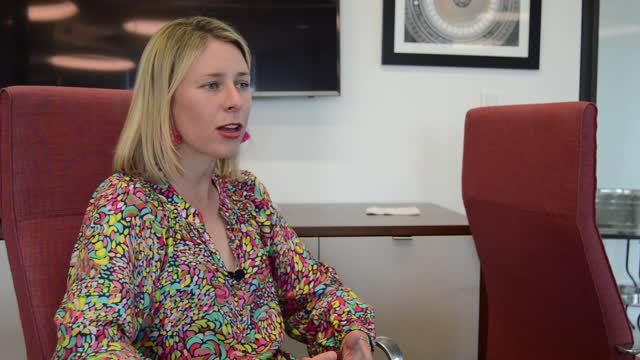 Politico's Cally Baute joins the show to discuss the golden age of political journalism. Screenshot from 'Breaking the News'

In the news this week, executives from Facebook, Google and Twitter faced the angry music in Washington, with senators upset at the tech platforms for their slow response to Russian ads that sowed discord during the election. The execs promised to do better, but lawmakers might regulate them instead. Amazon passed an important milestone, selling more than $1 billion in online ads in the last quarter. And as more media men are caught up in sexual harassment charges, Nick Denton points out how his old site Gawker had gossip on many of the miscreants ahead of the deeper reporting. Our Metric of the Week is Flyby Readers, and Politico’s Cally Baute talks tough competition for political news online, and their high-priced subscription products.

“Now I don’t think you can really say there’s anybody who’s not a political junkie. It’s not the sideshow now, it’s the main show.” - Cally Baute on Politico’s diverse audience

Cally Baute is vice president and general manager of Audience Solutions at Politico. She’s been with Politico since 2011. In 2013, Baute was involved in Politico’s first ever acquisition of Capital New York (now Politico New York), and launched the advertising and subscription business divisions of the new company. Prior to joining Politico, Baute worked at Ogilvy Washington and Starcom MediaVest Group.

The Tech Giants Face the Angry Music in Washington

When they came, they came with lawyers. It’s been a nearly a year since election day and it seems like we’re only just beginning to see an outline of the Russian influence campaign. And while we haven’t been able to predict what’s going to be the latest bombshell leak, we’ve known that social platforms are going to have answer for their part in this. Three hearings took place this week in the U.S. Senate and House to assess Russian interference in the 2016 presidential election. The general counsels from Facebook, Google, and Twitter testified — not the CEOs — each acknowledging that the problem was worse than initially believed. Russian agents posted more than 1,000 videos on YouTube, more than 13,000 messages on Twitter and reached 126 million Facebook users.

The ads were bought without disclosure by the platforms, and the Russians also set up Facebook groups with inflammatory names. Lawmakers released the content of many of the ads and Facebook groups, showing how the Russians divided Americans and sowed chaos. While the tech platforms promised to take steps to prevent future problems, frustrated senators on both sides of the aisle were upset it took them a year to admit the problems while pushing a bill that would regulate political ads on platforms. Republican Senator Lindsey Graham said, “What we need to do is sit down and find ways to bring some of the controls we have on over-the-air broadcast to social media to protect the consumer.” Democratic Senator Amy Klobuchar of Minnesota was even more blunt, saying, “Our midterm elections are 370 days away, and we don’t have time to mess around with dialogue anymore.”

Amazon has joined Facebook and Google as a billion dollar ad company online. Amazon announced that its ad sales have increased 58 percent year over year to $1.12 billion in the third quarter. Advertising is an important part of Amazon’s “flywheel” strategy, according to Amazon’s Director of Investor Relations Dave Fildes. Fildes told analysts on Amazon’s recent earnings call that, “Our goal is to be helpful to consumers and help them make better shopping decisions… while also giving them targeted recommendations, making it helpful for customers instead of intrusive.” And that’s the rub for Amazon’s ads: they really are helpful and relevant when compared to a lot of more intrusive video ads and pop-ups.

To compare, Google reported ad sales of $24 billion and Facebook reported ad sales of $9 billion. By 2019, Amazon is projected to make $3 billion in ad revenue, according to projections by research firm eMarketer. The company sells three types of ads: sponsored products, headline search ads and product display ads. And here’s what’s helping Amazon sell those ads: more people are turning to it when searching for products. According to a survey by performance marketing platform Kenshoo, 56 percent turn to Amazon first when they’re looking for something to buy. The question is whether Amazon can move beyond ads related to products and become an even larger purveyor of advertising in other realms, providing competition for Facebook and Google.

The allegations of sexual harassment in media and Hollywood continue to come in, and all this week we’ve been hearing stories about Kevin Spacey, Dustin Hoffman, Jeremy Piven, Oliver Stone and Michael Oreskes of NPR. And the allegations have come with consequences for some, though no legal charges yet. After a day on leave, Oreskes resigned from NPR on Wednesday, and Netflix suspended production on “House of Cards” indefinitely.

And in many cases, from Kevin Spacey to Harvey Weinstein to Bill Cosby, Gawker reported on some of the most high profile sexual harassment cases long before they made headlines in mainstream media. Gawker founder Nick Denton writes that although official channels have failed victims of harassment, unofficial channels – including internet gossip on sites like Gawker – were early warning signs about perpetrators. Denton wrote that, “They say that news is the first draft of history; well, as we used to say at Gawker, gossip is the first draft of news.”

–In third quarter earnings, the New York Times announced a 46% rise in digital revenues driven by subscriptions, while print ad revenue was down 20%.

– Apple limited time with the new iPhone X to celebrities and YouTube personalities rather than many tech reviewers.

– The new WikiTribune project has opened its doors for contributors, who will be editing and collaborating with paid journalists.

– And during the terrorist attack in New York City, Snapchat’s Maps showed real-time footage as the attack unfolded.