How an HBCU Found a Game-Changer in Drone Journalism 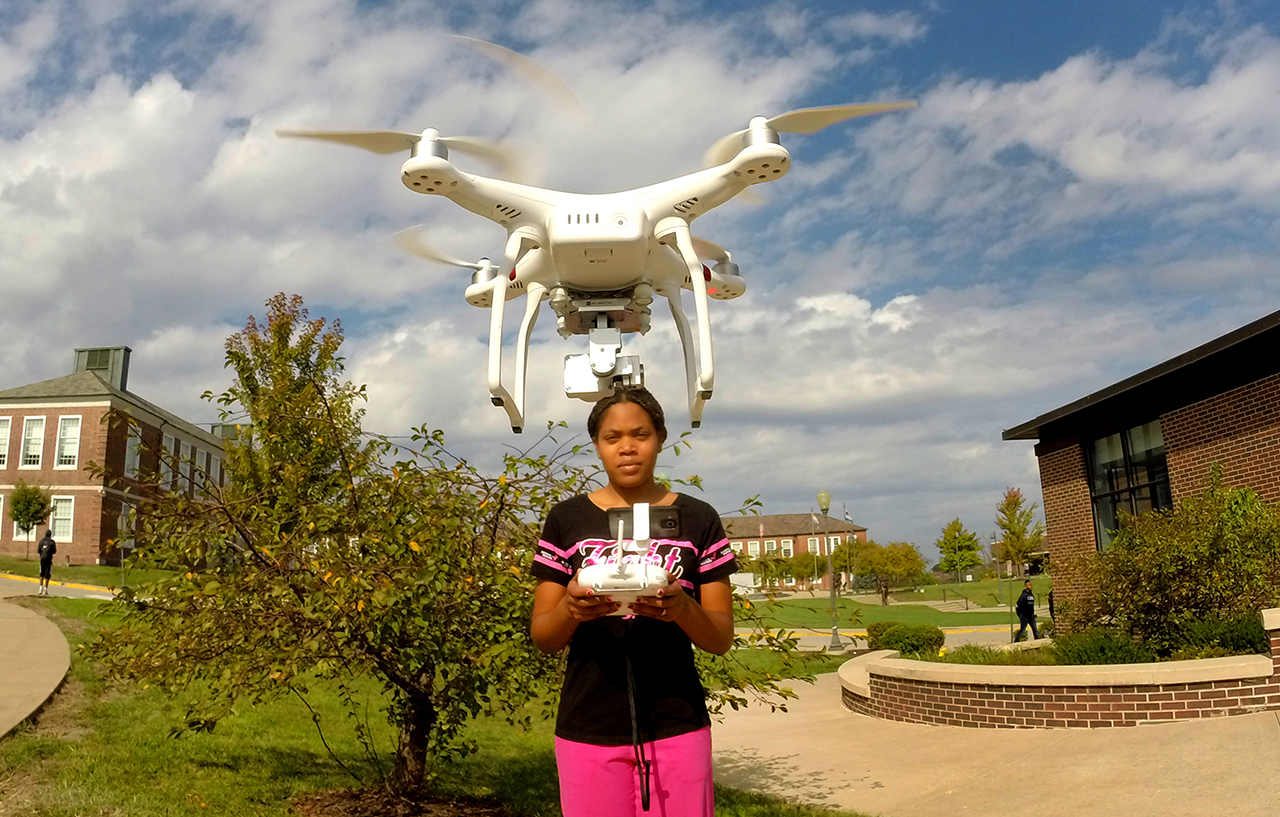 Many university journalism programs are aiming to strike a balance between teaching legacy skills and adopting curricula that include digital innovations conducive to post-graduation employment. We know successful integration of emerging technologies into the classroom will likely expedite a student’s entry into the profession.

At the same time, we can no longer think the latest big thing is going to be the final drop in the technological bucket. But what is the next “big thing?”

"Students are realizing that a drone is not a toy – it’s a tool."

Arguably, it’s unmanned aerial vehicles – drones. We see drone use in daily newscasts, advertising, and in just about everything produced for television. A few universities – especially Matt Waite at the University of Nebraska’s Drone Journalism Lab – have been studying the role of drones in journalism. This year, Waite assisted the Poynter Institute, Google News Lab, and DJI drones in a series of nationwide seminars on drone technology and trends in drone usage.

I was one of approximately 90 who attended the three-day event in June at the University of Wisconsin-Madison School of Journalism. The training was beneficial to me as a drone pilot, but perhaps most important, it provided insight toward integrating drones into a journalism curriculum, which is not easy given the legal (and scary) implications of what amounts to flying a miniature lawn mower over a busy campus.

For my school, the training led me to believe that drone journalism is a perfect fit for Lincoln University’s journalism program.

I teach at Lincoln University, a 3,500-enrollment public historically black college and university (HBCU). We are allegedly the first black university to offer journalism courses and the first to publish a campus newspaper. We are certainly steeped in tradition, but not in change. However, I was pleasantly surprised when my Poynter drone training funding was approved and my plan to fly drones on campus was enthusiastically endorsed. For my students, this was a game-changer.

Lincoln is an open-enrollment university. Every high school graduate is given a chance to succeed – we don’t turn anyone away. The majority of students come from inner-city Kansas City and St. Louis – two cities known for failing public schools. Many are first-generation students, arriving with almost no understanding of college life. Journalism majors often struggle to shed bad writing habits or learn the value of newswriting and AP style. But, that’s the bad news.

The Good News of Drone Technology

We’ve launched Blue Tiger 1 (our DJI Phantom 3 drone), and it appears to be paying dividends. Students are realizing that a drone is not a toy – it’s a tool. A drone is both visual and hands-on, and as an added benefit, many introverted students are gravitating toward a media tool that removes intense human interaction — a shell-remover, of sorts.

By using a cell phone on the drone’s controller, students learn the connection between navigation, piloting and producing photographic products. Because students are digital natives adept at cell phones and gaming technology, the learning curve on flying a drone seems rather flat. And let’s be honest – flying a drone is fun!

I’ve watched many broadcast students struggle with writing-intensive courses. These students thrive by watching or interacting through hands-on instruction. Drone journalism allows students to actually see journalism in action, to experience the link between documenting and disseminating the news. Students are realizing drone journalism may be a new path to skills and opportunities, and at least one veteran news photographer agrees.

Bill McCormac, newsroom operations manager at CBS affiliate KMOV-TV in St. Louis, thinks journalism students should acquire some familiarity with drones before entering the workforce. He said the technology is having a significant impact on newsgathering strategies.

“They need to have some familiarity with drones, but they don’t necessarily need a (pilot) license,” McCormac said during a recent phone interview. Out of 20 photographers on the KMOV staff, five have the FAA Part 107 drone license and a sixth is preparing for the test. Can drone training make a difference in hiring?

“If two people are competing for a job and all things being equal, the person with drone training or a license would have an advantage,” McCormac said.

Why Drone Journalism is a Game-Changer for Lincoln University Students:

Why Drone Journalism is a Game-Changer for Lincoln University: