Your Guide to Net Neutrality (2018 Edition) 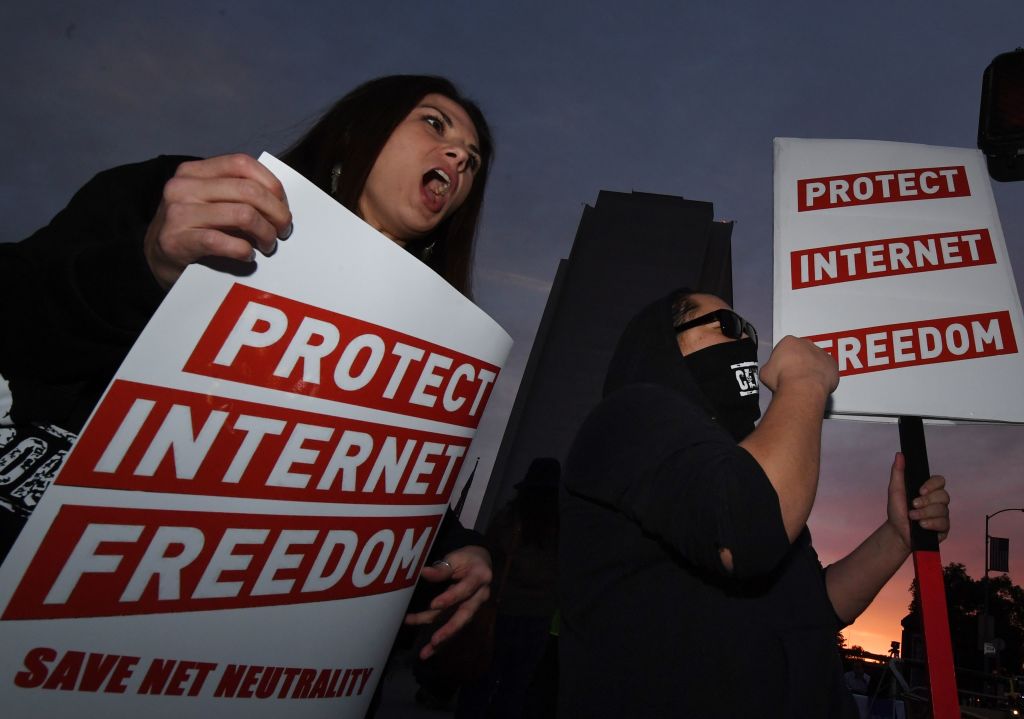 Net neutrality is one of the hottest issues on the internet – and that’s no surprise, because net neutrality affects just about every corner of the web. Small sites and large ones (including Netflix, Facebook, and Amazon) are rushing to defend net neutrality even as the FCC and the Trump administration put the finishing touches on its demise. But what’s actually going on here? What does all of this mean?

Like so many other political issues, the debate around net neutrality has become muddied with political catch-phrases, buzzwords, and branding – even the phrase “net neutrality” itself reeks of public relations strategies. So you’d be forgiven if you found yourself asking where you stand on net neutrality, or even what it is. Let’s take a closer look at this thing.

"Net neutrality is not a new issue, but it’s getting a lot of attention right now. There’s a good reason for that: net neutrality rules established under President Barack Obama are on the ropes."

Let’s start with this: net neutrality refers to the idea of regulating the internet to ensure equal access.

That may sound simple, and it may sound like something that no reasonable person could be against. But, of course, there are two sides to this issue. We get the internet through internet service providers (ISPs) like Time Warner Cable, Comcast, and the rest of that oh-so-popular gang. These companies own the infrastructure that connects our computers. It costs them money to move our data back and forth, and not all websites and internet users use the internet in the same way. Outlawing ways for the ISPs to get more money out of those power users is more than a question of fairness: ISPs may charge everyone more to make up the difference, and they claim lost profits slow down innovation.

In the end, the central question is one of degree: how much should we regulate the ISPs?

Net neutrality could mean treating the internet like a utility, a policy that would mean heavy regulation to ensure equal access and could even mean capping the prices ISPs are allowed to charge. At the opposite extreme, looser net neutrality rules give ISPs new powers to penalize users and websites that use more data – powers that could extend beyond price hikes and into more extreme measures like throttling (slowing down) sites, banning them, and more.

The case for (and against) net neutrality

The basics of the cases for and against net neutrality are obvious as soon as we understand what net neutrality is. The short version of the debate is this: advocates say net neutrality ensures equal access for all users to all websites, and opponents say it puts an unfair regulatory burden on ISPs.

So why would anyone besides ISPs favor net neutrality? Well, judging by the comments received by the FCC that weren’t faked, they largely don’t. But there are some fair points on both sides, as I covered in a bit more detail in my post on the pros and cons of net neutrality over at my internet home, Cordcutting.com.

The cons of net neutrality aren’t strictly limited to the ISPs. For instance, net neutrality opponents argue that low-bandwidth users are being unfairly penalized by net neutrality. A perfectly neutral net would mean no throttling or extra chargers for power users who torrent tons of files or stream tons of 4K video, which means unfairly slow speeds and high prices for light users who just want to check their email once in a while. (As things stand now, ISPs charge more for faster speeds and, in some regions, cap data use. But if net neutrality regulations put an end to these practices, ISPs could make up the difference by hiking the regular rates. Rates, too, could be regulated, but that would simply open up another front on this complicated debate.)

The pros of net neutrality, on the other hand, are of two basic types. There’s the financial aspect, which benefits power users and bandwidth-hungry sites like Netflix; and then there’s the ideological aspect, which focuses on a free internet as an inherently good thing. In some cases, the two overlap: we’ll see in a moment, for instance, how social media websites could end up on the wrong side of paywalls, hurting users financially while also dealing a blow to free online speech.

One major question about rolling back net neutrality is what, exactly, the ISPs will do with all of their new power. We know they’ll likely go after bandwidth-heavy sites and power users with new charges or throttling – after all, it was only a few years ago that Netflix had to pay off Comcast to end throttling just a few years ago. But there’s so much more that could happen, and that has people scared.

ISPs want the power to discriminate against high-bandwidth sites, but without regulation, ISPs could just as easily milk all popular sites for extra cash – not just the ones that are expensive for them to deliver. Anything is possible: ISPs could work out sweetheart deals with certain companies, exempting some sites, services, or games from data restrictions and extra charges and stifling competition (in fact, this has already happened). They could exempt services they own from their regulations (this has happened, too). They could even adopt a cable model, blocking off certain sites for those willing to pay for “premium” service.

Who is for net neutrality?

The pro-neutrality crowd includes most of the big sites mentioned above. Bandwidth-hungry sites like Netflix don’t want to deal with extra costs or see their user base frustrated by throttled speeds. Popular sites like Facebook have nothing to gain from a deregulated net, and may have a lot to lose. By and large, most web businesses are for net neutrality.

Users are also largely for an open internet. Power users stand to benefit the most, but the idea of an internet uncensored by the ISPs is appealing to most people.

But surely some users oppose net neutrality, right? Well, sure – but fewer than we thought, from the looks of things. Pew Research Center found that a mere 6% of the 21.7 million comments submitted to the FCC on their net neutrality plan were unique. The other 94% were spammed, often by bots: the seven most repeated comments alone accounted for 8 million submissions, or 38% of the total. And guess what? Six of those seven were anti-neutrality posts.

That doesn’t mean that no internet users oppose net neutrality. But it does mean that, by and large, consumers are choosing to side with neutrality and against the ISPs.

Politically speaking, this side of the debate is represented mostly by Democrats, though there is some variation in the degree to which politicians want to see ISPs regulated.

Who is against net neutrality?

ISPs are, of course, and so are a minority of web-based businesses – such as the ones owned by ISPs, since they would have an inside track in an unregulated marketplace.

Free market purists and small-government advocates are predisposed to be against net neutrality, too, and in Washington the Republican party argues their case. President Donald Trump and FCC chairman Ajit Pai oppose net neutrality, of course.

Net neutrality hits the news for two main reasons: either it’s up for debate by some lawmaking or regulatory body (which is what’s happening now – more on that later), or some company is doing some shady thing that violates net neutrality’s principles. Let’s take a look at some of the more famous cases of the latter.

We aren’t the only country with internet, of course. Before we move on to discuss the United States’ latest net neutrality showdown, let’s take a look at some net neutrality stories from around the world.

Why net neutrality is in the news right now

Net neutrality is not a new issue, but it’s getting a lot of attention right now. There’s a good reason for that: net neutrality rules established under President Barack Obama are on the ropes. But first, let’s cover a bit of background.

Finding the right balance between regulation and internet freedom is the job of the Federal Communications Commission, or FCC. The FCC is led by five commissioners, and it always has at least two members of each party on it. The president appoints people to the FCC, so the majority – and the chairperson – are of the President’s party. Democrats tend to be in favor of net neutrality and its attendant regulations, while Republicans tend to be in opposition.

Under President Obama, the FCC was led by Chairman Tom Wheeler. Though he didn’t initially thrill neutrality advocates, Wheeler ended up leading the FCC in a strongly pro-neutrality direction, and his 2015 net neutrality rules were a huge victory for the pro-neutrality folks. The wide-ranging rules set the stage for the FCC to reclassify broadband internet and gain even more regulatory powers – but that never happened, because Donald Trump won the 2016 election and become the 45th President of the United States.

Supporter of net neutrality protests outside a Federal Building in Los Angeles, California on November 28, 2017. (Ronen Tivony/NurPhoto via Getty Images)

Naturally, the FCC looks a little different now. Wheeler is out, and Ajit Pai, who held on of those mandated minority seats under Obama, has ascended to the chairmanship under Trump. When that happened, reclassification plans were promptly scrapped, and the stage was set for Pai to undo the 2015 net neutrality rules.

And that brings us to today. The Pai-led FCC has announced their plan, and it’s the expected total rollback of the 2015 net neutrality rules. The vote is coming on December 14th. It will be hard to stop – the FCC is in the executive branch and can weather anything short of a Presidential election pretty well – but it’s not too late to make your voice heard (view the proposal here and click “+ Express” on the left to comment). If you’re in favor of net neutrality, your comment could help fight back against a flood of fake anti-neutrality submissions. This debate won’t end with December’s vote, and you can expect to hear about net neutrality in connection with legislation, regulations, and elections for years to come.

One response to “Your Guide to Net Neutrality (2018 Edition)”