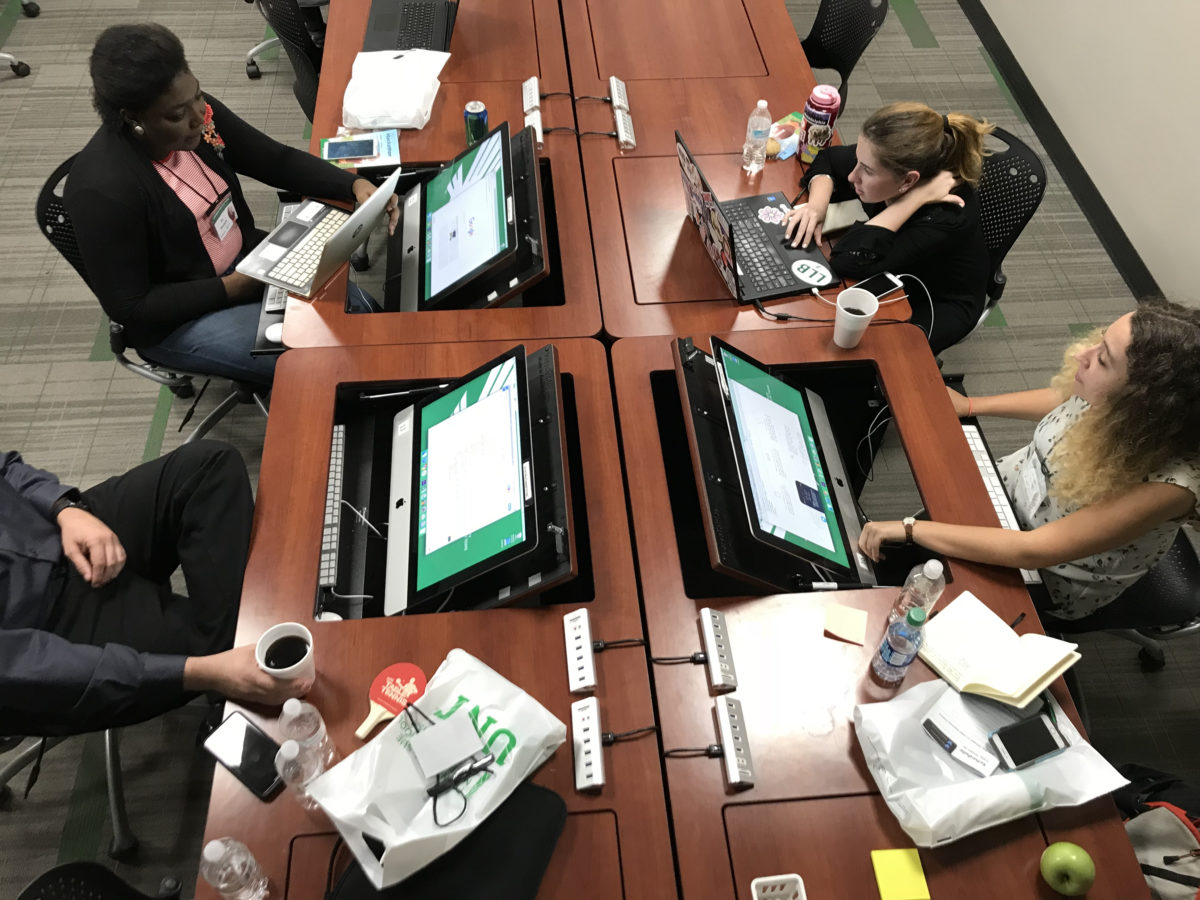 Team Pingpong huddles for brainstorming at the 5th J-School Hackathon at University of North Texas. Photo by Evelyn Gonzalez.

If you received an application today to participate at MediaShift’s next hackathon event, what would you do? Would you pull out your phone and start on it right away? Or would you do some research first because you have no idea what a hackathon is?

A hackathon is an event, usually spanning the course of a weekend, where small groups work together using technology to transform social and business ideas into realities. I had the chance to visit with some of the teams at this year’s J-School Hackathon, which took place at the University of North Texas on Oct. 20-22, 2017. The groups ranged from 3-5 students, hailing from different schools across the country. The students were teamed up early in the morning, then had about 36 hours to come up with a solution to a certain sports or health issue of their choosing. Many of them had limited knowledge of this subject, yet still had a lot to contribute.

"The hardest part...is figuring out how to make money off of [our startup] without excluding people from the service." - Team Thermometer

There were groups of students from various schools, including UNT, Temple University in Philadelphia, Bennett College in North Carolina, University of Texas at Austin, and even a media relations adviser from Grambling State University in Louisiana. Everyone came together this weekend with the common goal of finding solutions to sports or health problems.

Journalism students are often tasked with going out to any number of events to watch, comment, and analyze, so they don’t always get to experience events the way traditional participants do. But at this year’s Hackathon, the teams were made up of journalism students. Many were nervous, seeing as it was their first time competing in this type of compressed brainstorming event. Connor Leech from University of Texas at Austin said, “I had a free weekend, so it sounded like a good time to come up and work on fun stuff.” Short and sweet: this was the reason many of the students admitted they came. Despite their lack of hackathon experience, these teams had enough skills to create coherent, profitable pitches.

I had the chance to speak with numerous teams and got to see the different processes they went through to come up with an idea all team members felt comfortable with. Team Bocce seemed to get along really well. Once they had one idea going, the ideas just kept flowing. But it is important to note that keeping an open mind is key to finding the best idea, as mentioned by Team Thermometer.

“I think the part that turns out to be the hardest is synthesizing.” – Sierra Webster (University of Oregon)

“Just trying to come up with a name that works [was the biggest challenge].” – Jonathan Joyner (University of North Texas)

“The hardest part…is figuring out how to make money off of [our startup] without excluding people from the service.” – Team Thermometer

Finding solutions to health and sports issues is no easy feat. Team Thermometer focused on solutions to mental health, while Team BMX Bike focused on easing the negative emotional effects of various health issues. They came up with a product box meant to inspire women through celebrity stories and causes. Team Reflex Hammer didn’t have anyone with a background in the health field, so they came up with a largely consumer-based idea.

Overall, these teams had a good balance of character and experience that helped them to keep a level head. However, no amount of experience and knowledge can substitute for more time.

“This one day thing is killing me. I haven’t seen daylight.” – Nea, Team Bocce (Bennett College)

No one on Team Bocce had prior experience, and it was a challenge for them to start with an abstract idea and shape it from there. But they remained confident in their abilities to get the job done by encouraging each other and staying energized. Their workspace was filled with water, snacks, and stress balls. Team members took frequent breaks by walking through the halls to get their blood flowing and give their brains a break. Member Connor Leech at one point suggested taking a walk outside as a group and throwing a ball around.

Team Bocce had the right idea. They enhanced their overall creativity by keeping their brains constantly stimulated and their bodies adequately nourished. This is the key to surviving such a mind-straining event. A hackathon is not meant to stress you out and keep you from sleep. It’s supposed to be a space where new, social ideas are created that will impact your life, and hopefully the world.

This is why hackathons are expanding so quickly in location and popularity. People want an outlet to share their ideas with, learn new things, and have the chance to bring back knowledge to their daily lives that will impact the people around them.

Brianna Adams is a journalism student at the University of North Texas.