by Mira Lowe and Ryan Vasquez 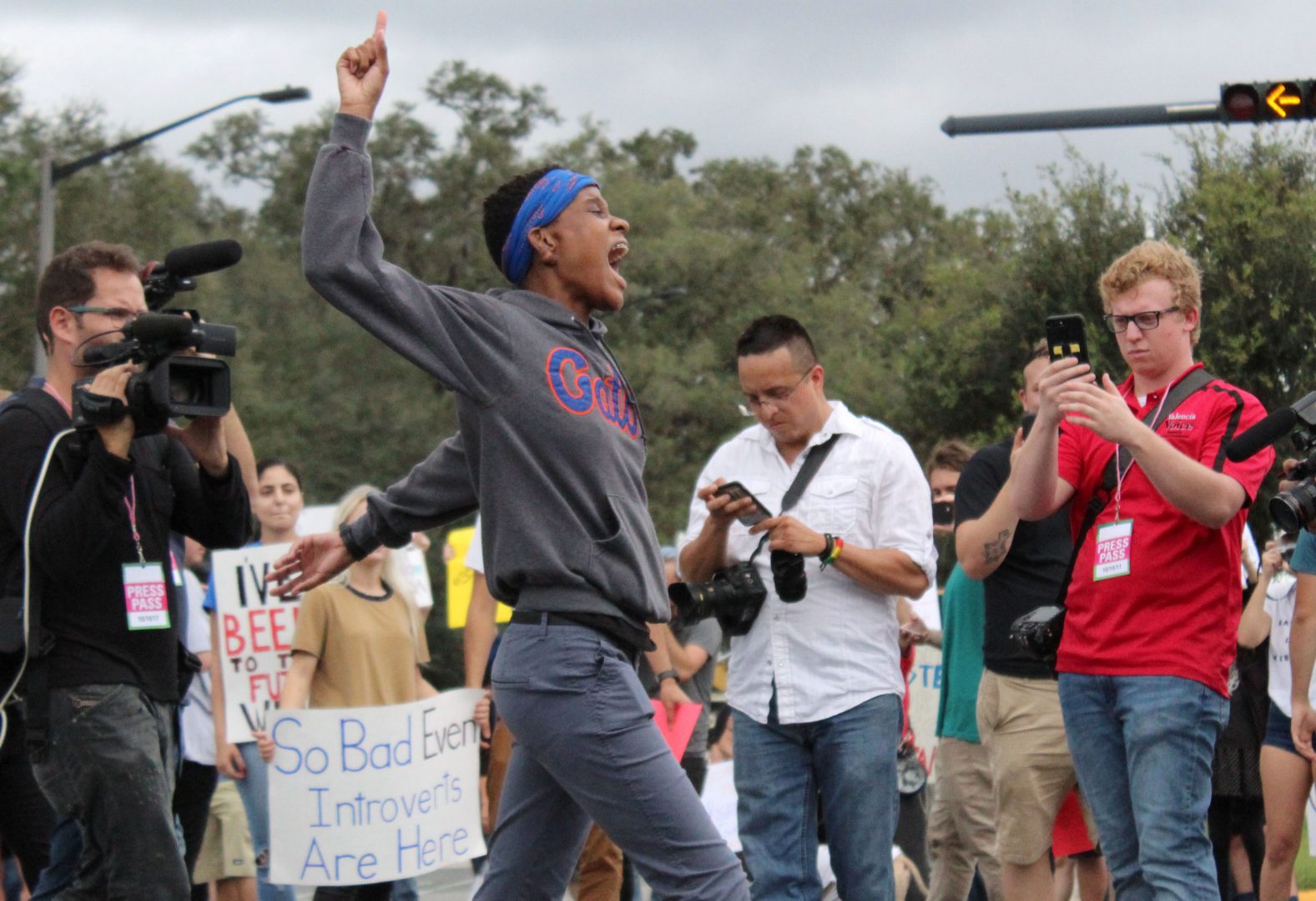 Student journalists capture images and video of a demonstrator as he shouts at the University of Florida during Richard Spencer's visit in October. (Ethan Bauer/WUFT News)

From the outside, it must have looked worse than it actually was. Roads closing, protestors assembling, the governor declaring a state of emergency. The National Policy Institute’s Richard Spencer, a white nationalist, came to speak on the University of Florida’s campus Oct. 19, and it had all the makings of a major news event.

As any good news organization should, the University of Florida College of Journalism and Communications Innovation News Center (INC) began its preparations back in September when Spencer was originally denied the right to speak on campus.

We stripped journalists down to the bare bones of what they needed to cover the story: smartphones and cameras.

The INC is a working newsroom covering North Central Florida and staffed with over 100 student journalists guided by nine news professionals each semester. News is distributed on multiple broadcast and digital platforms, including WUFT-FM and WUFT-TV, the local NPR and PBS affiliates. Our students have experience covering local government, crime, education and extreme weather issues, but what could prepare them to cover something that had the potential to replicate what happened in Charlottesville, Va., a few months ago?

Covering a volatile story like this is hard enough, but doing it with a student reporting staff is a true challenge. At the College, we practice the “teaching hospital” model, where students learn by doing, often in real time. So, how do we coach our young reporters to prepare for possible encounters with vitriol and violence? How do we prepare these young men and women to cover a story that some in our community wished we would ignore? How do we ready the students for the unknown?

Teaching Students to Cover the Event

Much like the University and city of Gainesville, we planned weeks in advance for Richard Spencer’s speech. We identified how many students we wanted covering the event and what their roles would be on that day. Our professional news managers met daily leading up to the day of the speech to check in and solve issues, such as media credentialing and working with state and national media partners. We labored over safety plans and evacuation strategies and determined how many news managers we wanted in the field to help guide the student reporters.

The week prior, we published diverse perspectives about Spencer’s right to speak, the First Amendment, community opposition and Spencer in his own words. Armed with this collective coverage, the power of our professional expertise and the strength of our journalism program, we felt that the student journalists would be equipped to handle this story in a thoughtful and impartial matter. Our editorial focus would be on the people and not the person.

Before Spencer’s arrival on campus, we rounded up our 20-plus reporters and equipped them with ethics guidelines, maps and other necessary information. We coached them on how to identify hate speech and how to avoid it creeping into our coverage. News managers checked in individually with reporters as some waffled back and forth about whether they wanted to be a part of this major news event. It’s hard to prepare for the unexpected, but we felt, as an organization, we did as much as we could.

Demonstrators march down Hull Road with a “No Nazis at UF” sign in Gainesville, Fla. (Grace King/WUFT News)

Our first roadblock came when one of our reporters scheduled to get a behind-the-scenes look with law enforcement early in the morning was denied entry. This is when we found out that only credentialed media would be allowed to flow in and around the premises. We had originally thought media credentialing only applied to inside the venue.

The second roadblock came with a media credentialing mix-up that left us one less reporter on the inside. We had intended to pair all of our journalists in teams for safety and workflow, but we were now down to three reporters.

And, finally, law enforcement switched what media could carry with them during the event, meaning backpacks and gear bags needed to be left behind. So what do you do with more than half a dozen journalists expecting to be outside the event? We pivoted.

Covering With Only the Essentials

We stripped journalists down to the bare bones of what they needed to cover the story: smartphones and cameras. Some student reporter teams were assigned outside of the security perimeter at pop-up events related to Spencer’s speech. News managers also made the decision to embed student journalists in certain areas to get a first-person perspective of the event. Reporters stood in line to get event tickets to test a process that organizers claimed would not be discriminatory. Other reporters stood in line with protesters to see the process for allowing people into the secured area. We didn’t have to change the way we covered the event, just the stories we told. Sometimes adversity breeds creativity.

Our output was amazing. Photos and social media content from our student reporters were shared internationally. NPR interviewed one of our student journalists. Views at our news site, WUFT.org, hit an all-time high (despite a hacking attempt) and 90 percent of visitors to the site were new. We heard how some ticket-seekers were denied access inexplicably and witnessed it firsthand when it happened to one of our reporters. We heard both supporters’ and protesters’ stories on air and even managed to speak to all three of the men arrested for shooting into a crowd of people after the event. But most of all, we learned. Sadly, this won’t be the last time Gainesville will face a traumatic event, and it certainly will not be the last time these reporters will cover them. Experience is always the greatest teacher and resume builder.

This has been some semester for our student reporters. From nine football players being suspended and investigated for committing fraud to Hurricane Irma and now Richard Spencer, eventful would be an understatement. Through it all, the future of the journalism program has risen above and beyond. We are taking great pains remind them of the importance of what we do as journalists. We shine the light into the shadows, we hold people accountable, and most of all, we serve our audience.

Mira Lowe is director of the University of Florida College of Journalism and Communications’ Innovation News Center. Prior to joining UF in January, Lowe was a senior editor at CNN Digital where she managed the planning, execution and programming of various special projects across a global portfolio. Before that, Lowe was the editor-in- chief of JET magazine in Chicago, where she became the first woman to helm the number one African-American newsweekly.

Ryan Vasquez has been a multimedia news manager at the University of Florida College of Journalism and Communications’ Innovation News Center since 2014. He is also an adjunct instructor at the College teaching audio storytelling and podcasting. Vasquez previously was an award-winning reporter and host for Alabama Public Radio.