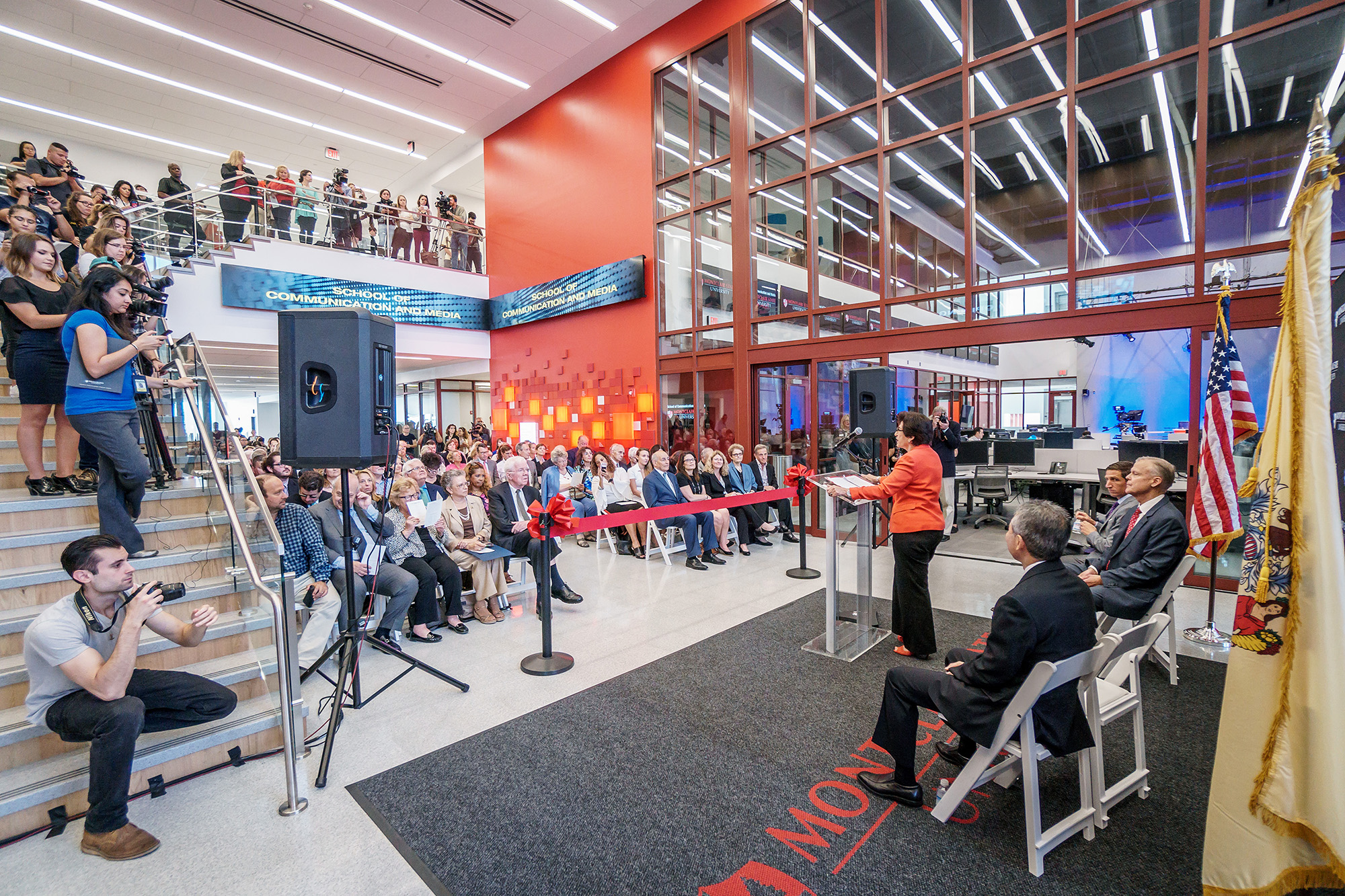 And it’s all part of Montclair State University’s new school of Communications and Media building, unveiled last week. The school boasts boasts industry-standard production equipment, from 4K and HD studios to multimedia labs, outfitted with Sony equipment through a partnership with the company.

"We don’t know what the jobs are going to be like when [the students] get out of here, but we want them to think creatively and collaborate." Mark Effron, Montclair State

Located in New Jersey, about an hour’s drive from New York City, this facility is likely the most technologically advanced school for broadcast communications and production in North America, according to MSU President Susan Cole. She pointed out that the school is more advanced than many professional facilities too.

“This building, as magnificent as it is, is just the toolbox,” she said during a ribbon-cutting ceremony. “The students and educators will be the heart of the matter.”

The 105,000 square foot building will house the communications department, as well as as the Center for Cooperative Media, the student newspaper The Montclarion, and WMSC, a full-fledged radio station complete with a green room for guests.

School of Communications Director Keith Strudler said the school’s curriculum was updated to incorporate the new technology. For example, all enrolled students are required to take a capstone course called “Transmedia,” in which students from various majors collaborate to create multimedia content.

John Garmendi, the business development manager for Sony’s Professional Solutions Americas group, said in a statement that the relationship between MSU and Sony goes back nearly a decade to when the university first used Sony’s high-definition professional equipment.

“Now, there is a growing demand for 4K content and for future professionals trained in the latest production technologies,” he said. “This trend, combined with Montclair State’s creative and ‘active learning’ approach to education, laid the foundation for building this unique facility and industry resource.”

He said the partnership will be long-term and will result in other campus-wide projects, but Sony did not provide any information as to what those will be.

The News Lab is what MSU Clinical Specialist Mark Effron refers to as the “beating heart and soul” of the Communications Building.

“Maybe others have said that [about other features],” he said. “But this is the one place where teaching, production, student collaboration and workshops come together.”

The Lab, which looks like a cross between high-tech classroom and a modern newsroom, is where students produce newscasts that are streamed on Facebook Live. Effron pointed out that the work students produce isn’t just graded – it’s actually broadcast.

The Lab is also where students from the radio station, newspaper and TV program meet to coordinate campus coverage.

Effron referenced his former colleague Lester Holt, who said that journalists need to be like a Swiss Army knife – flexible and capable of handling different types of jobs.

“We don’t know what the jobs are going to be like when [the students] get out of here, but we want them to think creatively and collaborate,” Effron said.

The building features two studios, including a 4K studio and control room where students produce Carpe Diem, the university’s public affairs program which reaches 500,000 homes each week and is posted to YouTube. The studio is outfitted with a set from Comedy Central’s The Nightly Show With Larry Wilmore, which was canceled last year.

The building’s classrooms are designed with open floor plans, breaking down the traditional classroom setting, according to Todd Kelshaw, the coordinator of Communication Studies.

The editing lab features 30 editing suites lined up all around the perimeters of the classroom, allowing instructors to see each student’s computer from anywhere in the room. The active learning classroom has tables that are designed to be easily moved and rearranged.

Kelshaw said the decentralized layout makes it easier for students to interact rather than be passive.

“Classroom environments and structures like this allow much more interaction,” he said.

Keith Strudler, the direction of the School of Communications and Media, speaks in the School’s new presentation hall. Photo courtesy Montclair State University.

The school’s Presentation Hall is outfitted with surround sound and robotic cameras. Strudler said the Hall will be used as a space for discourse, and it will be where screenings and community events, like debates and town halls, are held. Supreme Court Justice Ruth Bader Ginsburg recently spoke there, and the upcoming Lt. Governor debate for New Jersey will take place there as well.