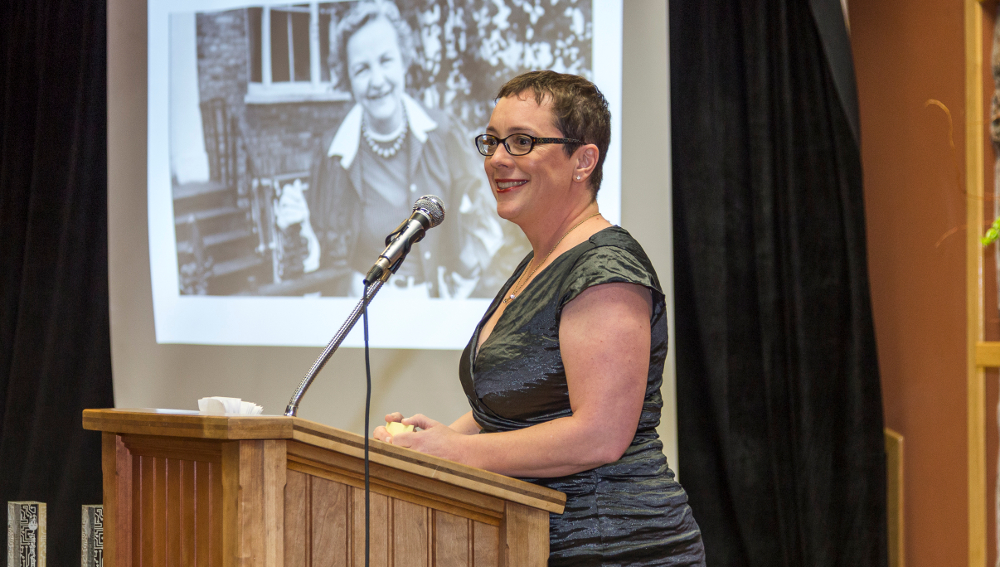 Julia Angwin of ProPublica joins the MediaShift podcast to speak about their Machine Bias series. (Photo by Alex Schoenfeldt for EFF)

In the news this week, Apple and Amazon are taking their original content ambitions further, bidding on the rights to the James Bond movie franchise. The Atlantic is launching a new membership service called The Masthead starting at $100 per year for print subscribers. And surprise! The 171-year-old Associated Press led all publishers with 35 million Facebook engagements last July, showing that tried-and-true journalism still has fans on social media. Our metric of the week is Email Metrics, and Julia Angwin of ProPublica joins us to discuss their series on Machine Bias and their bot that collects stories on how Facebook monitors hate speech.

“I feel like we’re in this weird situation where this big data economy feels like it’s fracturing our democracy in a way I wouldn’t have envisioned in my most paranoid moments before.” -Julia Angwin

Julia Angwin is a senior reporter at ProPublica. From 2000 to 2013, she was a reporter at The Wall Street Journal, where she led a privacy investigative team that was a finalist for a Pulitzer Prize in Explanatory Reporting in 2011 and won a Gerald Loeb Award in 2010.

Talk about vertical integration. For several years now, we’ve been talking about Apple’s push into original content but we’ve been thinking the company’s aim was to be more like Netflix with TV content. Turns out we were thinking too small because Apple now wants the film rights to the James Bond franchise. That’s right: James Bond. According to the Hollywood Reporter’s Tatiana Siegel and Borys Kit, the rights are being aggressively sought after by both Apple and  Amazon. They’re bidding against Fox, Sony, Warner Bros, and Universal for the rights to future 007 movies. If James Bond lands at a tech giant rather than a more established movie studio it would be a huge coup and would give them a marquee title to draw audiences to their other original content. There’s even a chance that MGM might sell the franchise entirely if the price is right.

And film isn’t the only sector that’s been hit by the tech giants. Sports rights have also led to increased bidding by Twitter, Amazon and Facebook. While Facebook was sitting out of the Bond action, the social giant did bid $600 million to stream the Indian Premier League cricket matches. Ultimately, Facebook was outbid by Rupert Murdoch’s Star network which bought both the streaming and broadcast rights. The bid does reveal Facebook’s interest in becoming a destination for live events. The social media company has some experience in live sports as it currently owns the rights to stream this year’s Major League Soccer season and it also partnered with Fox Sports to stream matches from this year’s Champions League. Now that the tech companies are acting more like media companies (after years of swearing off that identity), legacy media companies are paying a rising price for content.

The Atlantic Launches a Membership Program Called ‘The Masthead’

The Atlantic has been at the forefront of legacy magazine publishers who’ve reinvented themselves in the digital age. They’ve added sponsored content, events, consulting and more recently a podcast and a new tech billionaire owner in Laurene Powell Jobs. And now comes a new membership service called “The Masthead,” which costs $100 a year for current print subscribers, or $129 a year for non-subscribers. So what do you get for that membership? A laundry list of extras: a daily newsletter with exclusive content, extended reporting around the monthly cover story, access to a members-only Facebook group, weekly conference calls with editorial staff and discounted tickets to Atlantic events. There are even two full-time journalists devoted to the effort.

The Atlantic is just the latest outlet to try premium memberships instead of paywalls, joining publications like Slate and the Guardian. According to Digiday’s Lucia Moses, Slate now has 35,000 premium members, but dropped its price to $35 a year from $50. The Atlantic’s president Bob Cohn told Digiday that they’re trying to give die-hard fans new ways to interact with each other and The Atlantic’s journalists without penalizing regular members. As Cohn said, “We’re trying to create something new and different for our members. There’s a core audience that are just Atlantic die-hards. They want more connection with The Atlantic.” So will the effort work? It’ll be tough to get people to pay for yet another monthly or annual membership, but you can’t count out The Atlantic. They’ve hit 570,000 print subscribers, a number not seen in 15 years, and had their biggest digital audience ever, more than 42 million unique visitors, last May. Now we’ll see just how die-hard their fans really are.

Because the AP distributes so much content to so many other publications, it’s difficult to tell what kind of impact those stories have on social media. But a recent study by NewsWhip found that the 171-year-old news service was actually the leading publisher on Facebook judged by the number of likes, reactions, comments and shares of their stories. In July, the AP’s stories had 35 million engagements on Facebook, topping viral publishers like HuffPost, Daily Mail and BuzzFeed. So how did they do it? By providing solid reporting from 263 bureaus in 106 countries. Imagine that: non-fake news going viral on Facebook.

But the AP also had a little help from its members, as The Drum’s Ian Burrell points out. For instance, one story the AP headlined as “New book urges parents to reorder life for the sake of the kids” was repackaged by McClatchy Group under the headline, “Why kids today are out of shape, disrespectful — and in charge.” That story earned 330,000 social engagements. Plus, while the AP is just reporting the straight news of American politics, that alone will typically cause a tsunami of charges and counter-charges in comments on Facebook in the highly charged political sphere. While the AP itself won’t use clickbait headlines it’s considering new ways to headline stories on mobile and for video output. While others are talking about pivoting to video, the AP did that years ago, and now gets 47% of its revenues from TV clients vs. just 23% from newspapers. So while the AP continues to ply its basic trade in journalism, there’s still a huge market for solid on-the-ground reporting even in the social age.

– Facebook tells Congress it sold $100,000 in online ads to a shadowy Russian company during the U.S. election campaign last year.

– Mobile giant Verizon is offering a rewards program with free concert tickets and phone upgrades. The catch? You have to give the company your browsing history, app usage, and location data.

– A judge dismissed the lawsuit against Techdirt by the self-proclaimed inventor of email, Shiva Ayyadurai