NY Times’ Frank Bruni on Blurring Line of Opinion and Reporting, Scourge of Writers as Brands 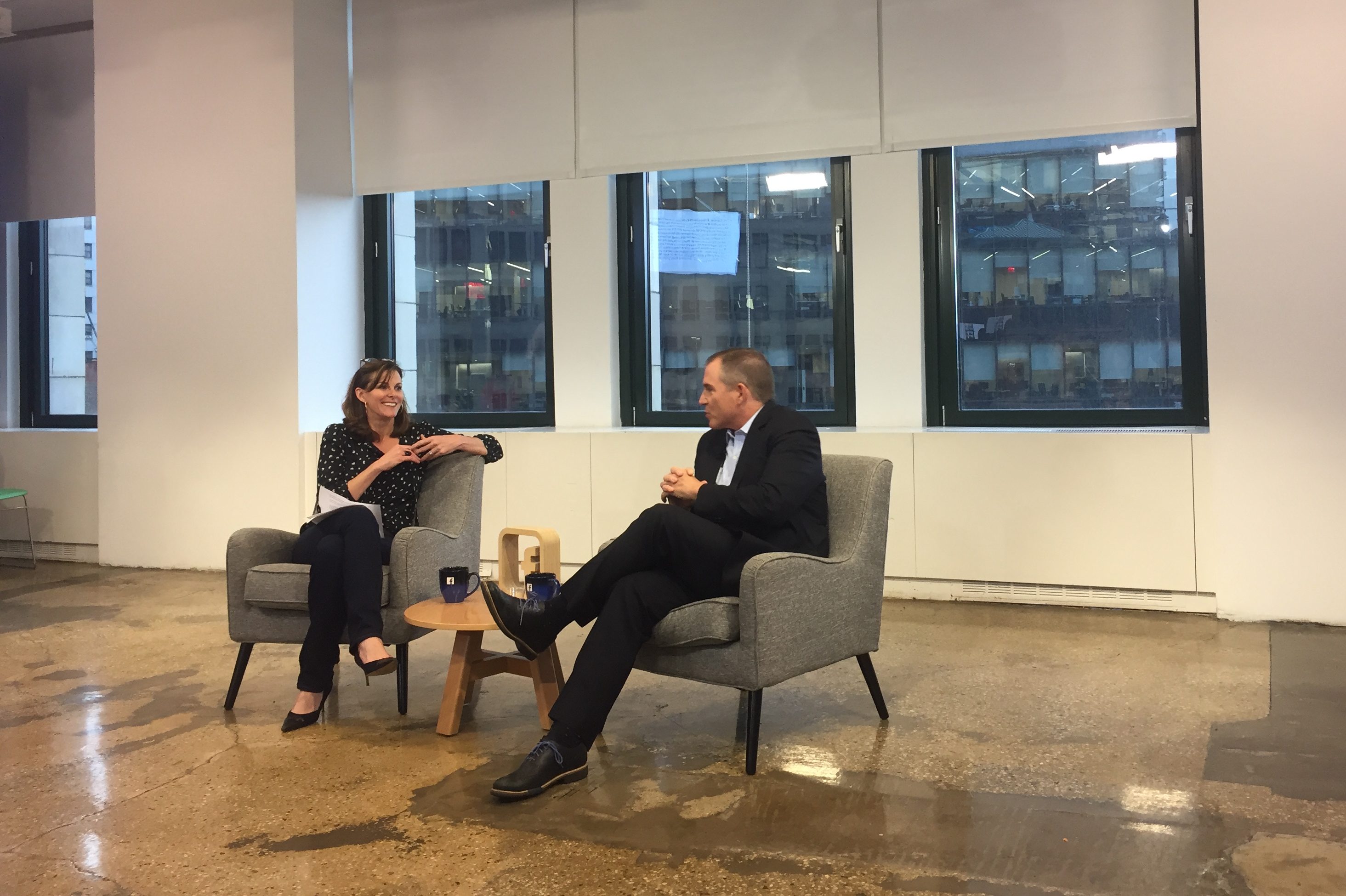 Despite his intention to take a break from work during his vacation, Bruni resolved to spend 90 minutes a day reading the news so as not to fall too far behind by the time he returned to New York.

"Now I can’t go 15 minutes with somebody in some context mentioning the word ‘brand’ as relates to journalism and journalists." -Frank Bruni

“You can turn away for two or three hours, and it’s like you’re two or three years behind,” He joked. “One day for the Trump administration is like one month in anyone else’s.”

Bruni described some of the challenges of covering Trump’s presidency – including the speed at which breaking news now occurs – during an interview with Campbell Brown, the former broadcast reporter who is now Facebook’s head of news partnerships. The event was part of a monthly series called Facebook Journalism Project Conversations.

Bruni is well known for his tenure as the Times’ chief restaurant critic from 2004 to 2009. Previously he was the paper’s Rome bureau chief and before that covered the White House under George W. Bush. He’s also written five books.

At the event, held at Facebook’s New York City headquarters, Bruni discussed his career path, including his shift into opinion writing, and how new technologies are changing the way he works as a journalist. Watch the archived livestream here.

From Reporting to Opinion Writing

“As soon as you start calling it out, it looks like biased reporting, but it’s not,” he said.

Bruni said the line between reporting and opinion writing has become somewhat blurred, as journalists approach stories differently and discuss their stories on secondary platforms. This can be effective for engaging audiences, but journalists too often become part of the story.

Social media in particular pushes journalists to be public figures so they can build their audience.

“Many readers find news by following certain individuals on social media,” he said. “If you want your work to find an audience, you have to make your stuff identifiable to that audience or already your work is going to not have the circulation that you would want it to.”

He referenced his time covering President George W. Bush and noted he never heard anyone on the Bush plane discuss their “brand.”

“Now I can’t go 15 minutes with somebody in some context mentioning the word ‘brand’ as relates to journalism and journalists,” he said.

There’s also a tendency among members of the news media to “out-clever” one another, which amounts to little more than performance art rather than contributing to any real debate, he explained.

“One of my ‘stations of the cross’ is checking what’s trending on Facebook,” he said. “Because if your job is, and your interest is, knowing what people are thinking about, what people are clicking on, what is penetrating their consciousness, you need to get that in a lot of different ways.”

New technologies have also changed the relationships between journalists and their audiences. For readers, their relationship with a particular journalist may have a “degree of intimacy,” Bruni said.

And for journalists who, in the past, had no idea how many people were reading their stories, they can now know exactly who their audience is and make adjustments for them.

The power to dictate the news agenda really belongs to consumers, he said.

“News is not decided to the same extent by a bunch of white men sitting around a table as it once was,” he said.

Allowing consumers full control over setting the news agenda can lead to the opposite extreme, however – “a lot of cute kitten videos,” Bruni said. A mid-point between the two would be ideal.

But between the algorithms that control what we see – and are based on what we’ve already clicked on – and the filter bubbles in which we seal ourselves, Americans are no longer able to find common ground, Bruni said.

“One of the biggest barriers is that we no longer live in the same realities, because so many of us have so assertively and thoroughly customized the input we receive that it becomes impossible to entertain or understand another viewpoint since you’re never exposed to it,” he said.

In the “rainbow of possibilities” of ideological thought, many people stay within one band of color, Bruni said.
Bianca Fortis is the associate editor at MediaShift, a founding member of the Transborder Media storytelling collective and a social media consultant. Follow her on Twitter @biancafortis.