Why Data Journalism, Even ‘Brilliant, Better Journalism’ is Coded as Liberal Propaganda 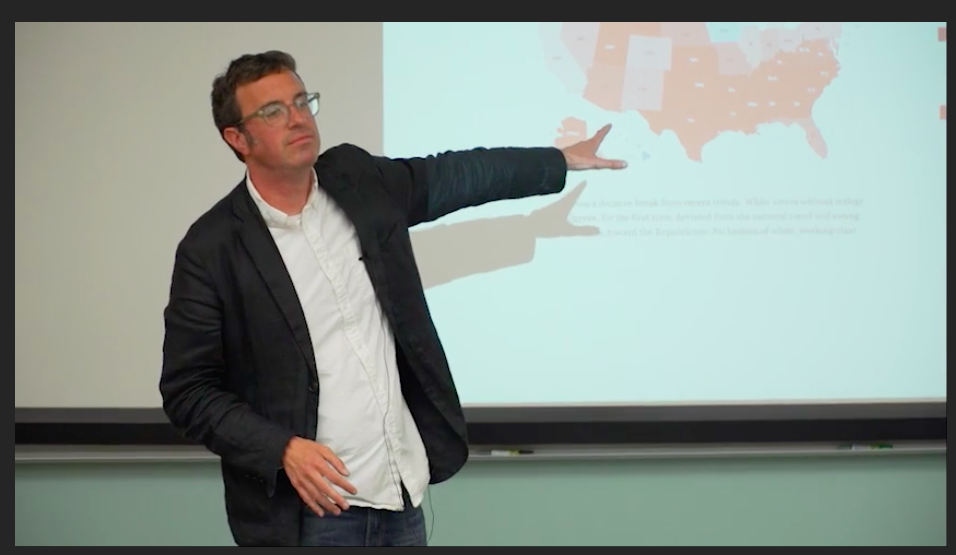 Each term, the University of Oregon invites guest speakers in the academic and professional media industry to participate in the “Demystifying Media” program. The lectures aim to challenge faculty and staff by introducing them to the latest thinking in media research and practice. The second lecture in the spring term series focused on where data journalism comes from. Coverage of the lectures is provided through a partnership with the University of Oregon.

“We simultaneously have journalism that’s better than ever, and journalism that seems to have less of an impact than ever before,” he told students during a recent lecture at the University of Oregon.

Anderson is an associate professor at the College of Staten Island (CUNY) and an author of books about journalism and its transition into the digital age. His lecture at the University of Oregon School of Journalism and Communication centered around data journalism, the subject of his upcoming book, which he will publish next year.

Data journalism, Anderson argues, has made journalism at some elite publications like the Washington Post, The Guardian and The New York Times “more accurate, more quantitative and more expository” than ever before. However, this style of journalism is relatively isolated in those high-level newsrooms.

These newsrooms, Anderson argues, were “too good to be immune” to criticism in the current political climate. They’ve been branded as the “liberal media.” And as a result, half of the American public discredits that data journalism they produce, because they consider it a partisan tool, rather than a measure of truth.

“Truth has become tribalized, and objectivity has become just another fashion, part of just another tribe as rendered by this form of journalism,” Anderson said. “That leads us to the paradox we are in today – a paradox that is more understandable when you look at the institutional and personal history of this form of brilliant, amazing, wonderful and profound journalism.”

The origins of data journalism:

Data journalism, as we know it, has its roots in the popularity of social science during the 1950s and 1960s.

The father of the practice is Phil Meyer, a reporter, researcher and professor who wanted journalists to incorporate social science, and the scientific method, into their work. This idea, which he called “precision journalism,” involved using data analysis as the foundation of stories, instead of merely collecting multiple opinions and regurgitating them all with equal weight.

“Social science helps reporters determine what competing viewpoints are worth,” Anderson said, summarizing Meyer’s points. “Don’t worry about stance, worry about method, your method should be grounded in social science, then you can have an opinion about what’s true.”

This kind of reporting caught on with investigative reporters, who harnessed the power of analyzing digitized government databases to search for, and expose, systematic injustices.

Examples include a 1992 Pulitzer Prize winning Miami Herald investigation about lax building code enforcement that allowed for excessive devastation after a Florida hurricane, and a 2010 analysis of nearly 3 billion hospital records by the Las Vegas Sun, which detailed widespread medical negligence. The list of quality examples could go on for days.

Meyer’s ideas flowed through investigative reporting, and organizations like Investigative Reporters and Editors and NICAR, resulting in institutionalized data reporting within the “elite tiers” of newsrooms, Anderson argued. To date, the practice hasn’t widely been adopted at “bones of the profession, at the beat reporter level,” he said.

Data journalism is trendy and smart. Anderson thinks it makes for great reporting, and points to work in legacy newsrooms, as well as outlets like Nate Silver’s FiveThirtyEight, and The New York Times The Upshot, which were designed specifically around data analysis.

The problem with data journalism is politics, he thinks.

“(Data Journalism) is stranded at elite media outlets that now, in later years, have not only become elite, but highly politicized,” he argues. “These best forms of journalism found a home in the very media outlets that are now regularly dismissed by half the population.”

As a result, this “brilliant, better journalism than we’ve ever seen,” is coded as liberal propaganda, instead of fact.

“There’s no easier way to get 40 percent of the country to agree with you on a particular issue than to turn it into a partisan claim. The minute you weaponize a truth claim in a partisan fashion, what you tend to have happen is the partisans rallying,” Anderson said. “I see trust in data declining just like trust in everything is by and large declining.”

This decline in trust has also extended to journalists, Anderson argues. He thinks reporters and editors have turned to data analysis, computational processes and artificial intelligence to offset the “disbelief in professional objectivity.”

“Journalists themselves and the society at large are no longer as confident in their processes for determining truth,” Anderson said. “What do we do then? Well we outsource it to an algorithm and to data that’s big enough to eliminate any chances of us making a mistake. The people get out of it.”

What’s clear from Anderson’s argument, however, is that regardless of how much better or more precise journalism becomes with data analysis, that quality does little to sway the opinions of readers who don’t trust “the liberal media.”

The future of data journalism:

Even if journalists can’t change this paradox alone, Anderson still have words of advice for students pursuing data journalism.

Namely: don’t pretend to know everything.

“I don’t think that any journalist standing and making strident truth claims is going to be politically productive in 21st century America,” he said. “The only way to improve democracy in this country is to trust people do deal with uncertainty in grown up, rational ways. That is the entire project that democracy and public life are built on.”

Where Meyer encouraged reporters to incorporate the hard-facts of science in their reporting, Anderson argues that journalists should go one step further, and also mirror the transparent relationship that science has with uncertainty.

“Science gets a lot of it’s energy from its open admission that it’s knowledge is partial and there is much more to be learned,” Anderson said. “I think all journalism, not just data journalism, all journalism should be much more aggressive in saying what it doesn’t know.”