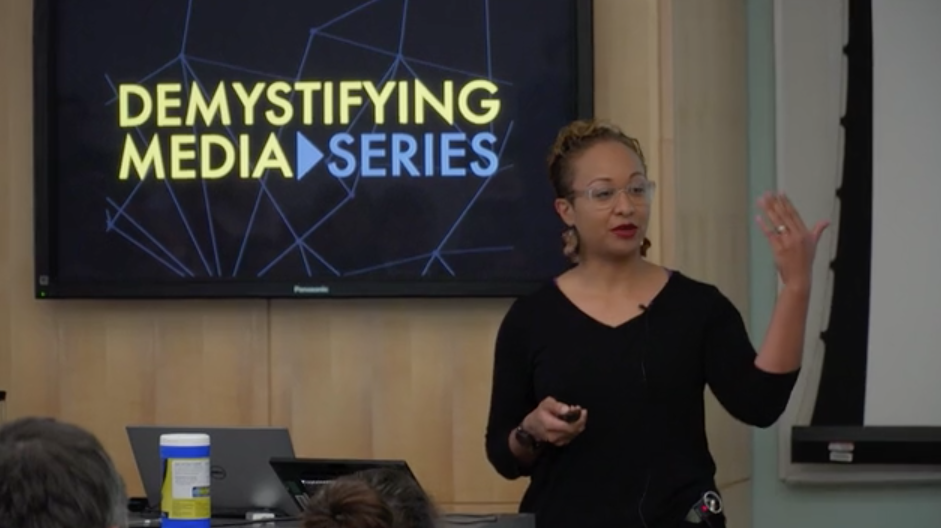 Each term, the University of Oregon invites guest speakers in the academic and professional media industry to participate in the “Demystifying Media” program. The lectures aim to challenge faculty and staff by introducing them to the latest thinking in media research and practice. The first talk in the series for Winter 2017 explored The “Flattening” of News and Its Consequences for Trust. Coverage of the lectures is provided through a partnership with the University of Oregon.

Stacy-Marie Ishmael doesn’t take photos of animals, or cute children or her lattes. Instead, her phone is full of screenshots of bad mobile news experiences. She has hundreds of them.

Ishmael is the former managing editor of mobile news for BuzzFeed, and during the past year she dived deeper into the mobile experience as part of her Knight Fellowship at Stanford University. In early May, she gave a talk at the University of Oregon about how design impacts mobile news readers and affects their levels of trust in the media.

Her outlook: Mobile news design is confusing, and often aggravating.

“It was only fairly recently, mostly coming out of education, that people have started to do research into how the way in which you consume something changes your relationship with the material,” Ishmael said. “Yet somehow, people in news and media, have gone blithely along, ignoring some of the other kinds of research that are coming out about our changing relationships with the products that we use.”

A few of the most critical issues Ishmael has identified include: over-simplified design conventions and the widespread use of advertorial content dressed up to look like news. Both of these phenomenon allow advertisers to trick readers into consuming their made-up content, and degrade audience trust in news, she argues.

That’s not a good thing, given that trust in the news industry is currently very low.

“It’s a real unusual spot to be in where both our sources and our potential subjects expect the absolute least from us,” Ishmael said. “We’re operating in a situation of negative trust. We’re not even at a baseline of zero, we’re at minus 100 and we have to figure out how to get from minus 100 just back to zero. Then we can talk about positive experiences.”

One of the things that aggravates Ishmael most about mobile news consumption is running into “chum.” That’s the term she uses for fake-news articles designed specifically to make readers look at advertisements.

Yes, “chum,” as in, the bits of decomposing that fishermen use as bait to get their prey riled up.

“The internet equivalent of chum is those terrible, super misleading ads and headlines you sometimes see at the bottom of news pages, that say things like ‘ten celebrities you didn’t know had died,’” she said. “You have this immediate reaction of ‘eew,’ or ‘really?’ and your brain can’t help itself. It’s absolutely designed to capitalize on your most basic emotions.”

These emotion-triggering advertisements seem to be inescapable. Ishmael has found them everywhere from the Washington Post to The Guardian to Bloomberg.

There’s no question that advertorial chum – the type of linking provided by Outbrain, Taboolla and others – makes big money for publishers. But at what cost?

“But when you do that, when you accept that, you set yourself up for being perceived as potentially less credible in an environment in which we already have low levels of trust. It’s a super no win situation.”

The “flattening” of design

One of the reasons chum makes news outlets look less credible is because it blends in with the real news. A primary reason for that, Ishmael argues, is the “flattening,” or over-simplification of news design.

Digital design does away with the kinds of visual cues that exist in newspapers, to let people know if they’re looking at editorial content or at a piece of advertising. And when news outlets use nearly identical templates to display content, Ishmael argues, readers get disoriented and feel deceived.

Even Ishmael, who is an expert at differentiating websites, has difficulty telling sites apart. Looking back at her screenshots, she often has to look at metadata to decipher which news outlets they came from, or if they came from fake-news sites.

“This is a problem. This is a real, genuine, maddening problem,” she said. “So when people tell me that it’s the responsibility of all of you – and the responsibility of all of us – to make sure that on a (small screen), or on a watch with notifications, somebody should instantly know if what they’re about to read was produced by Macedonian teenagers or the New York Times, I push back.’

Readers have “too much stuff to do”

Solving the trust issues that revolve around digital design takes a lot of attention, Ishmael points out. Unfortunately, attention is something in short supply.

Audiences, who are constantly bombarded with content that may or may not be real, are unlikely to verify whether a source is credible, or take the time to research a story, Ishmael argues. At the same time, newsrooms are so busy keeping up with ever-evolving technology and social and digital news trends that it’s hard to allocate the attention needed to fix problematic digital conventions.

To work against these problems, Ishmael suggests that both audiences and news outlets need to take more responsibility. Readers need to stop sharing things on impulse, and redevelop a healthy sense of suspicion about what they’re reading, she said. Similarly, news outlets need to question whether allowing sensational chum boxes on their websites are right for their audience and brand, whilst also improving the design and user experience.

“None of this is easy to solve. And they are a series of independent problems that have happened to coalesce around this moment,” Ishmael said. “But, there’s a lot of opportunity to try and fix them.”