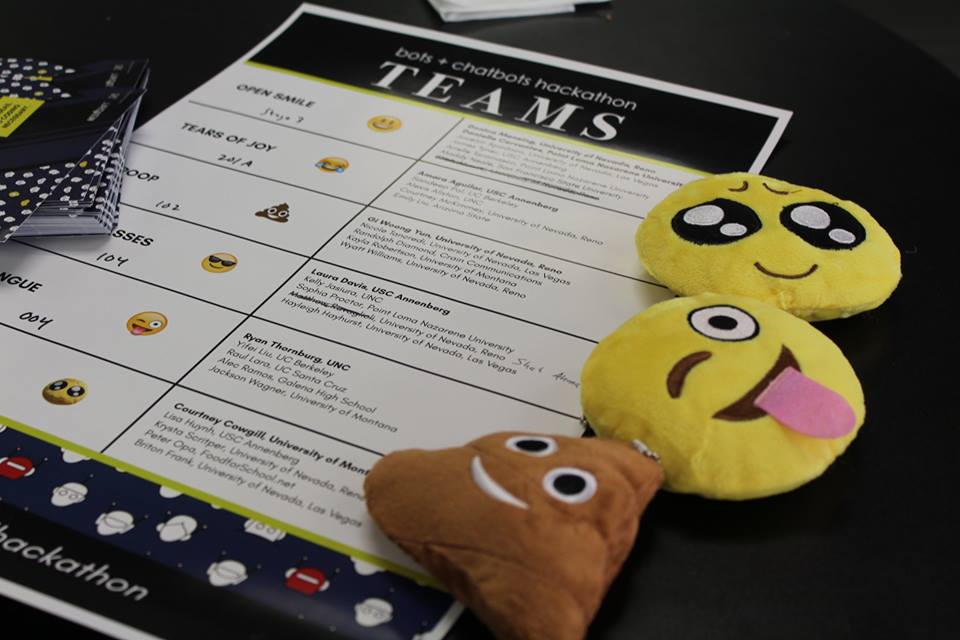 Student teams – each of which was named after a designated emoji – had to create startups based on chatbot tech for the 4th Annual J-School Hackathon. Photo by Adrianna Owens.

Chatbots are being used to deliver the news, track your finances and even work as lawyers.

At the 4th Annual Journalism School Hackathon at the Innevation Center at the University of Nevada-Reno, students were put into teams and given the task of pitching an idea for a media startup centered around news bots and chatbot technology.

The winning team was Green Guide, which helps millennials manage their finances.

What I Learned by ‘Hacking’ Chatbots, by Krysta Scripter

What Chatbots and Hackathons Can Teach J-Schoolers About the Future of Journalism, by Jackson Wagner

Conflict, Research and Money: The Keys to Winning a Hackathon Pitch, by Kelly Jasiura

Here’s a sampling of feedback we received on a survey after the event:

“The J-School Hackathon was an incredible, inspiring weekend. I got to know and work with an amazing team, proving that little to nothing is impossible when you set your mind to it — even creating the foundations of a business in less than two days. MediaShift brings mentors that are not only extremely insightful in the event’s specific topic, but also knowledgable about how to apply those skills to a wide range of startups. I would highly recommend attending, whether it’s to learn about journalism’s wide range or to gain the motivation to build your own startup!” -Emily Liu, Arizona State University

“I really enjoyed this weekend! I learned a TON and felt like I finally had an outlet to apply a lot of the skills I have learned in my classes and internships. I also really enjoyed that the speakers broke up the work day, so we weren’t working constantly. I feel like the facilitators and mentors provided a hardworking and focused environment that wasn’t intimidating. Overall a great experience!”

“The Hackathon definitely prepared me for a future in a fact-paced and creative environment, and demonstrated both to myself and to a panel of judges my capabilities in thinking, collaborating, designing and demonstrating. This program is beneficial for all media and business majors as well as those with untapped potential in these fields.” -Arielle Taramasco

“It was a great event to bootstrap students into the world of startups and motivate them to think of ideas that could change the world. The best part was that we could apply what we learned in the speaker sessions!” -Sandeep Pal, UC Berekeley

“As my first Hackathon, I had no idea what to expect (let alone what a chatbot is). By the end of the weekend, not only did I understand more about the shifting market of chatbots in the media landscape, I was also forced out of my comfort zone enough to pitch a startup, make a business plan, and present it to some big names in the industry. While the timeline was good — I din’t have to miss more than a day of school — Saturday was a REALLY long day. I would have liked a chance to network with other teams and facilitators outside of the work groups.” -Kayla Robertson, University of Montana

“The topic of the Hackathon was interesting and made everyone think outside of the box. The guest speakers and facilitators allowed students to manage their own projects with a healthy dose of guidance — something not common in the classroom.” -Courtney McKimmey, University of Nevada, Reno

“There could have been an ice breaker the morning of the first day, so everyone could meet other teams before getting to work.”

“Definitely more chatbot than newsbot, but a good learning experience regardless.”