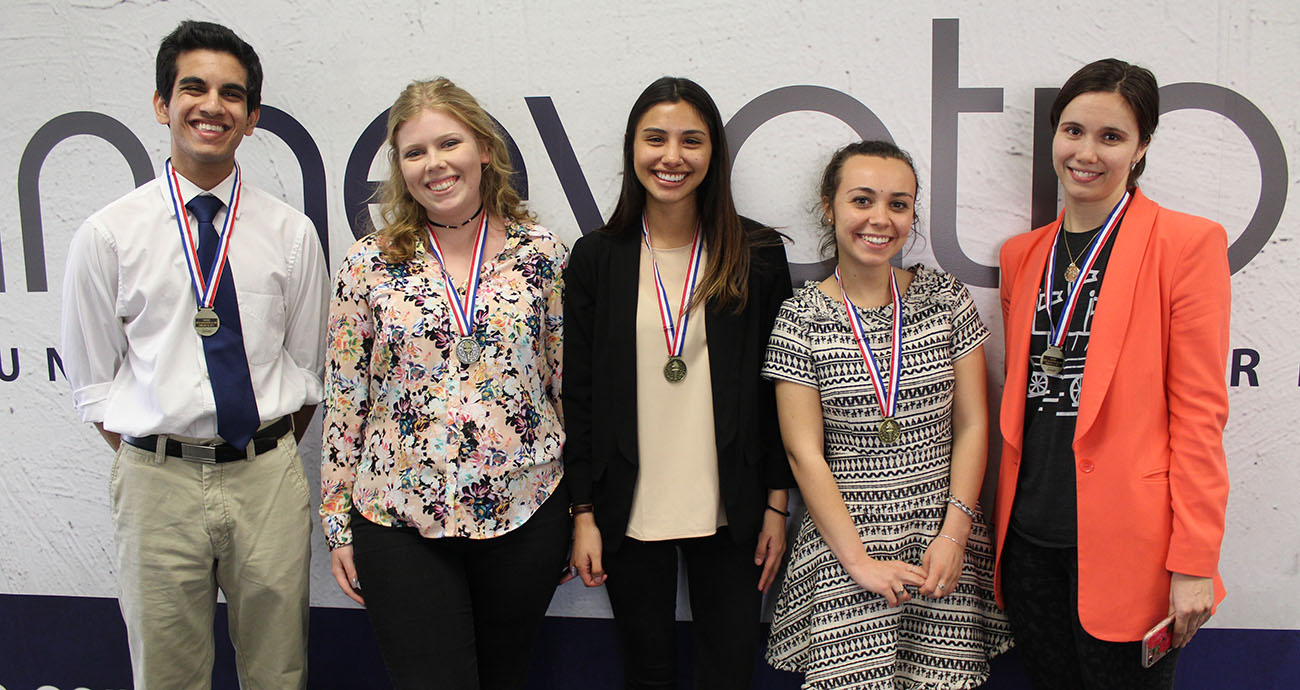 Journalism students from across the country used bots and chatbots last weekend to “hack” solutions to problems ranging from news consumption for the dyslexic to money management for millennials.

Produced by MediaShift and the University of Nevada-Reno’s Reynolds School of Journalism, the 4th Annual J-School Hackathon at the Innevation Center brought together students from 11 schools who met to conceptualize a startup including a news bot or chatbot from scratch and pitch it to a panel of judges.

Mark Glaser, founder and executive editor of MediaShift, said part of the Hackathon is getting students to work with peers from different schools.

“The teamwork aspect is always important, as is learning to work with people you’ve never met before,” he said. “It’s a once-in-a-lifetime experience for many students who don’t get this kind of training at their schools.”

Donica Mensing, associate dean of the Reynolds School, said she was excited to participate in the Hackathon as a facilitator.

“Having the opportunity to bring people together in this way really helps position the Reynolds School as a leader in journalism education,” she said.

Team “Open Smile” works on developing their bot to help travelers make the most of their foreign experiences.

The power of a team hack

Courtney McKimmey, a junior at the University of Nevada, Reno, said the team aspect helped her group come up with better ideas. The team pitched a bot that would unscramble news for people with dyslexia and make news more digestible.

“I learned how to approach solving problems from teammates that I wouldn’t have thought of before,” she said. “The most rewarding part of this weekend was the diversity of people and ideas.”

Donica Mensing, the facilitator for “Team Open Smile,” puts her team at ease by starting the weekend with an ice breaker.

While working toward solving unique problems through the development of bots, the students were guided by key speakers, floating mentors and team facilitators.

Keynote speakers talked to students about how to market, create and monetize their bots as well as how to pitch their ideas to judges (who were the equivalent to investors).

Celeste LeCompte, director of business development at ProPublica, talked to students about why monetization matters for their bots and how to get people to give them money for their product.

Saying that advertising is only a small part of the solution for online revenues, she emphasized that you can’t get any money from people if you don’t ask for it.

Among the floating mentors was Katherine Hepworth, assistant professor at the University of Nevada, Reno, who teaches courses in graphic design, visual communications and user experience.

Hepworth floated between teams, and gave advice on logo design, user experience and business models. She stopped by a team that focused on a bot that gives travelers ideas of what to do on flight layovers.

Every team also had a team facilitator who was there to help foster and grow the students’ ideas.

Among the facilitators was Amara Aguilar, associate professor of professional practice in digital journalism at USC Annenberg, who led McKimmey’s team, and gave a talk about human-centered design on Saturday morning.

McKimmey said Aguilar was an asset to their team and helped focus the teammates, who ended up with a second place finish.

Kelly Jasiura, a senior at the University of North Carolina, stressed the importance of her team facilitator, Laura Davis, assistant professor of professional practice at USC Annenberg.

“Our mentor definitely helped lead us to creating a great chatbot,” Jasiura said. “She kept us on track within our ideas and didn’t pass judgement on them.”

The first place winners take their medals as they talk about their struggles in conceptualizing their financial planning bot, Green Guide.

A team that pitched a financial planning chatbot, Green Guide, designed to be friendly and accessible for Generations Y and Z, took first place.

Jasiura, a member of the winning team, explained their bot as something that can be used by a younger generation to “take on an adult problem.”

During their pitch, they emphasized the issue of millennials or the younger generation failing to plan for their future financially. Their bot would tackle the problem by giving the user tools for financial success, like advice on savings or by sending users entertaining, motivational GIFs.

Sophie Proctor, junior at Point Loma Nazarene University, said she was surprised to have won, and said the user-friendly interface of her team’s chatbot is what helped them succeed.

She also said the experience will push her to further look into chatbot technology.

“I am definitely very interested in problem-solving through chatbots now,” she said. “I came into this weekend not knowing what to expect at all but after working with my group and developing a startup that could actually be used, I think it’s something that I am going to explore in the future.”

Adrianna Owens is the graphic design lead at the Nevada Career Studio and the marketing intern for the University of Nevada Reno’s Research & Innovation Department.