Dealing a Deck to Explore Media Impact and Engagement 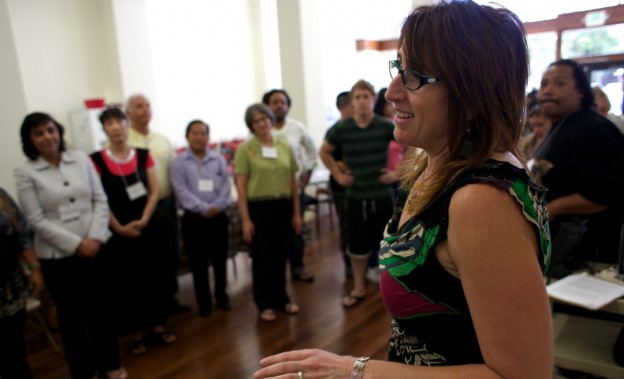 A new set of cards from Dot Connector Studio offers media makers and journalists a new way to organize and plan for their work to have an impact.

The Impact Deck includes cards for platforms, audiences and engagement models that users can lay out and connect to hoped-for outcomes. It’s a physical model of the conversations journalists, documentary filmmakers and other media makers have in order to argue the case for their work more explicitly to funders and subscribers.

Using the deck, to me, allows people to come together around a table to ask questions

“The real heart of the thing is the engagement models,” says Jessica Clark, who created the cards with her Dot Connector Studio colleague Carrie McLaren. “The point is to reckon what they think their relationship is with the audience.”

Clark hopes the cards can help accelerate journalists’ interest in media engagement and understanding about how their work has an impact in their community of readers or viewers.

“There’s an innate knowledge we have about how these things related to each other,” Clark says. The cards, she says, are a way to translate what we know to our work as groups and individuals.

How the deck works in the newsroom

One newsroom that has been experimenting with the Impact Deck is Capital Public Radio in Sacramento, Calif., where jesikah maria ross oversees community engagement for an innovative public radio station.

When CapRadio was recently planning a multimedia documentary on the housing affordability crisis, the cards became a essential tool. Ross, along with Senior Editor of Innovation Catherine Stifter and Chief Content Officer Joe Bar used the deck to map out a shared vision for the project, which came to be titled The View From Here: Place and Privilege.

“The cards help me to build a bridge between those overlapping but different philosophies of why create media and how to use media,” ross says.

Capital Public Radio mapped out a shared vision for a project on affordable housing using a beta version of the impact deck. Credit: jesikah maria ross.

The cards can also help newsrooms create a shared vocabulary around engagement and impact when those ideas are new. Depending on the personal and professional backgrounds of news organization staff, terms like constituency, civic action and amplification can have different meanings. But having working definitions that everyone agrees on are important when making decisions about a project. The cards, which use those terms and others, encourage groups to listen and learn from each other through play.

“Using the deck, to me, allows people to come together around a table to ask questions,” says ross. The card exercise for The View From Here, for example, led to important conversations about what the interactive documentary was trying to do and how it fit within the station’s big-picture goal of having an informed community.

“The cards give us a way to think together, in teams and across beats, which helps us be smarter about what goals, partners, audiences and activities might lead to desired impacts. They also help build a culture of evaluation into our projects just by getting people to talk, before rolling tape, about impact.”

Clark designed the initial version of the Impact Deck as a senior fellow at the Media Impact Project, and it’s based on her extensive research on media impact for Media Impact Funders. (An early prototype was an impact font instead of a card set.) The goal was to overcome a common challenge in the field: How to evaluate projects on emerging platforms. There are no rules yet, not to mention standard metrics to measure success, for media delivered via virtual reality, for example. What was needed was a more flexible, dynamic tool.

The cards are a “reality check,” Clark says, on the ability of metrics to describe every facet of media engagement and impact, especially at the most macro level.

4 ways to use the cards

How do the cards work in practice? Here are a few ideas to get you started.

Classroom or training setting. Clark recently shared a version of the deck with attendees at the Transformative Media Conference in Washington, D.C. In this kind of context, the cards can be used to talk about real projects or as hypotheticals, to develop creativity and problem-solving skills.

A single media maker. “It’s really good for shaking up people’s assumptions about who their audience is,” Clark says. Using the deck to work one-on-one can deliver new clarity to ideas.

Media teams. The most common use of the cards may be with project teams where team members have different skills and interests. The cards can be part of a planning process where goals are being shaped in order to get everyone working toward a common, clear objective.

On your own. “It’s a dialogue tool, even with yourself,” Clark says. Content producers can ask themselves where they are in a project and how they are spending their time, then use the cards to check their assumptions and look for overlooked opportunities.

The cards are available to purchase from the Dot Connector Studio website.

Jason Alcorn (@jasonalcorn) is the Metrics Editor for MediaShift. In addition to his work with MediaShift, he works as a consultant with foundations, non-profits and newsrooms.