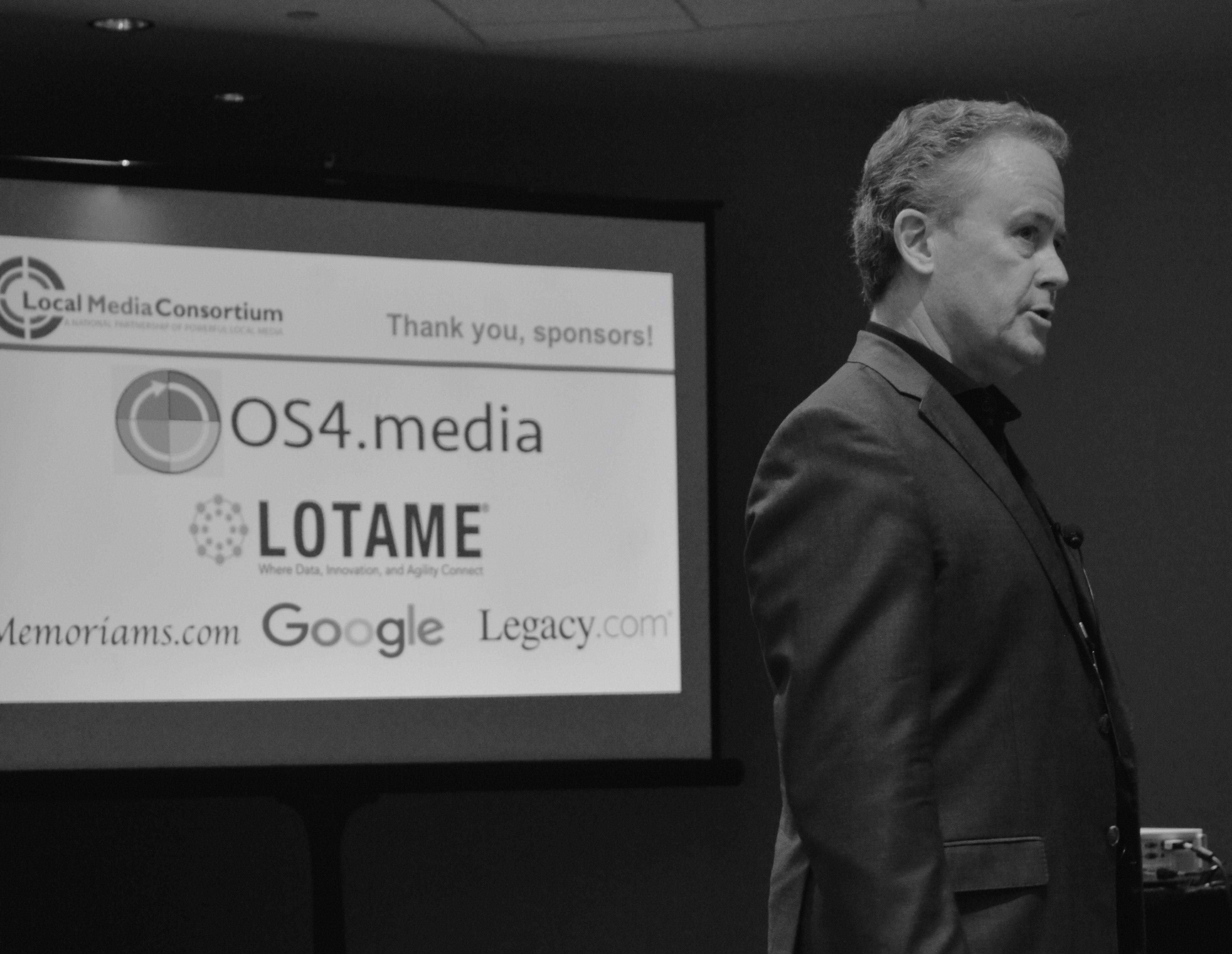 Rusty Coats, the executive director of the Local Media Consortium, joins the MediaShift podcast this week.

In the news this week, Facebook and Apple make moves into TV, but it might be BuzzFeed and NBC that make the biggest splash. YouTube star PewDiePie gets dumped by Disney’s Maker Studios for anti-Semitic videos, and his YouTube original show is canceled. Edward Snowden is president of the Freedom of the Press Foundation and is helping to develop tools to protect journalists and their sources. Politico’s Kelsey Sutton joins us to talk about Trump’s attacks on leakers and his selective choice of questioners at press conferences. Our Metric of the Week is Headline Metrics, and we speak with Rusty Coats, head of the Local Media Consortium, to talk about the prospects for local news in the digital age.

"A humble man is more willing to learn and we've been a humble state for a while." - Rusty Coats on getting local media companies to partner together to leverage greater digital revenue.

Rusty Coats is Executive Director of the Local Media Consortium, which includes more than 75 media companies driving more than 4 billion pageviews and 12 billion advertising impressions per month to 155 million unduplicated users, making the LMC the 5th largest news entity measured by comScore. He also is President and founder of Coats2Coats, a consultancy that focuses on a media future that is participatory, profitable and mobile, working with for-profit and non-profit media companies, startups and foundations funding journalism innovation.

Kelsey Sutton is a media reporter for POLITICO Media, where she covers the intersection of politics and media. She was formerly a media reporting intern at Capital New York.

We all know that video and TV content is where it’s at. Every digital media company has been oriented toward video for the past few years and it’s only getting worse. Worse? That’s the take from viewers and critics who are wondering how Apple and Facebook will really wow people. At Code Media, Apple’s Eddy Cue unveiled the new reality series, “Planet of the Apps,” where app developers pitch a panel of celebrities on their ideas, and then… you get the idea. (This is what happens when you let tech companies greenlight TV show ideas.) The other Apple show is “Carpool Karaoke” from James Corden, which has been a hit on YouTube. While Cue and Apple say they are not trying to compete with Netflix, HBO and others, what are they doing? They already have a solid base of 20 million subscribers on Apple Music, but maybe this is an effort to experiment with original content.

Facebook, meanwhile, hasn’t quite unveiled its efforts in original content yet, but it did announce its new TV video app at Code Media, which will run videos on your Apple TV, Amazon Fire TV or smart TV. The social giant has been trying to tap into TV advertising money for some time, but won’t be running ads on the app, yet. The app will suggest content and live-feeds, and you can save videos on your mobile app to watch on TV later. Meanwhile, BuzzFeed might be making the most serious foray into original shows, having spent the past year and a half developing shows with NBC, which has invested hundreds of millions of dollars in BuzzFeed. The first show will be a true crime documentary series about the death of a Mississippi teenager who was burned alive in 2014. There are also two reality shows called “Mom vs. Chef” and “Try Guys,” where you can likely guess the premises. The shows do have the benefit of being tested online with BuzzFeed first.

We’ve told you before about YouTube’s top star, PewDiePie, a.k.a. Felix Kjellberg, who earned $15 million last year. Now, he’s in deep trouble over a series of videos he’s made with Nazi imagery and anti-Semitic “jokes” that didn’t go over well with his business partners. Wall Street Journal reporters inquired about the videos with Disney’s Maker Studios, which has a joint venture with PewDiePie, and Disney later said it was dropping him as a partner. YouTube itself has been featuring an original show with PewDiePie on its subscription service, YouTube Red. The Google division first said it was pulling ads from the offending videos, and later said it would drop PewDiePie from its preferred ad network and would be cancelling his original show.

In one video, PewDiePie asks, “Is a joke actually pure racism? Context F-ing matters.” But racist jokes apparently do matter. And this puts YouTube in a bind, as Wired’s Davey Alba writes, because it has to be a platform for content and a content producer. As a producer, it wants to allow edgier content that can be popular. As a platform, it can’t alienate users and advertisers. Meanwhile, Disney’s Maker Studios loses its biggest client, just as it’s making job cuts again. The Hollywood Reporter’s Natalie Jarvey reports that the Disney arm will cut down its client base to 300 top creators. Maker was bought by Disney in 2014, and Jarvey notes that the sale price came to $670 million, and didn’t reach the potential $950 million price because it didn’t hit performance targets. Those targets will take an even bigger hit with the loss of PewDiePie, who has given a black eye to the potential payoff for video stars.

If you’re a journalist, Edward Snowden wants to protect your data. The former intelligence contractor and whistleblower has been serving as the president of the Freedom of the Press Foundation, according to a report by Wired’s Andy Greenberg. The foundation has worked on a variety tools based around encrypting data. Among them is a tool that would detect if malware were installed on a phone; and another would enable encrypted video chat, which Snowden says he uses every day. But the Foundation’s biggest success thus far has been SecureDrop, a system to handle sensitive information like leaks and news tips. Already major outlets such as the New York Times, the Guardian, and the Washington Post have adopted it. And as leaks are getting in the spotlight after Michael Flynn’s resignation from the Trump Administration, we can expect more people to use SecureDrop.

But how long Snowden will be allowed work on these projects is up in the air. Last week, NBC News reported that Russian officials were considering handing Snowden over to the U.S. in a move to curry favor with the new administration. Snowden himself seemed unmoved by the reports, tweeting that, “I am not afraid. There are things that must be said no matter the consequence.” Russian officials denied that there was a deal in the works, and at this point it seems unlikely that such a deal would happen, as Russian-U.S. relations have much bigger obstacles. Election interference. Nuclear treaty violations. And even Russian spies off the coast of Connecticut. It’s an interesting time to be securing leaks and secret sources for journalists.