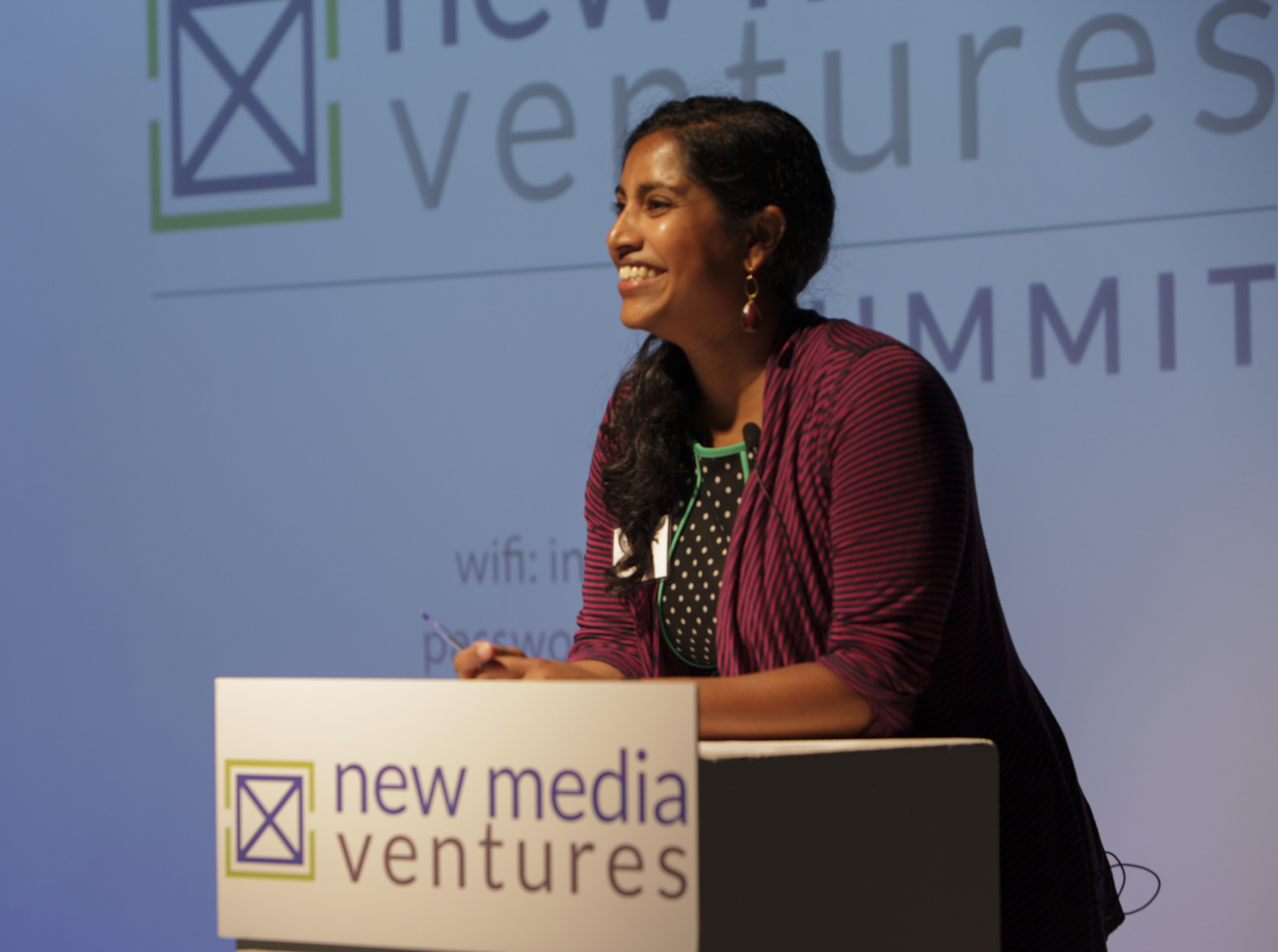 In the news this week, ESPN brings down Disney’s earnings while HBO hits 2 million streaming subscribers. Fake news comes to liberals in need of wish-fulfillment. And the New York Times is now offering a bundle with Spotify for new subscribers. Politico’s Joe Pompeo joins us to discuss the turmoil at the Wall Street Journal, which lost a key editor to the New York Times. Our Metric of the Week is Reaction Metrics, and I’ll go one-on-one with New Media Ventures’ Christie George, who’s looking to fund ideas that will help build better media.

"Make sure you've got a deep understanding of your users or your audience and how or why they are going to come to your site or service." -Christie George on how to pitch New Media Ventures

Christie George is the Director of New Media Ventures, the first national network of angel investors supporting media and tech startups that disrupt politics and catalyze progressive change. At New Media Ventures, she has overseen the investment of more than $9 million into a portfolio of non-profits and for-profits, including Upworthy, CrowdTangle and SumOfUs.

When it comes to high-priced TV content, HBO and ESPN are a real study in contrasts. In 2015, HBO decided to offer a stand-alone streaming service for $15 a month, while ESPN can only make promises about a streaming service “coming soon.” What are the consequences? Time Warner CEO Jeff Bewkes said that HBO has now hit 2 million streaming subscribers. And that will give HBO a lot more leverage as they negotiate new carriage deals with Comcast and Charter. ESPN, on the other hand, has moved much more cautiously into streaming, relying much more on pay TV channels, and that’s hurt its parent company Disney right in the wallet. Disney reported first quarter revenue was down 3 percent, and blamed some of that on ESPN.

Several factors are squeezing the so-called “Worldwide Leader in Sports” including the high price of broadcast rights, lower ad revenue and declining TV subscriptions — i.e. cord-cutters. ESPN’s subscription numbers have dropped from a high of 100 million down to 88 million in the last six years. As Forbes’ Mike Ozanian points out, Disney’s cable business has taken a major hit over the past two years, dropping from $1.26 billion in operating profit down to $864 million. That’s a big drop. As Ozanian puts it: “Mickey Mouse needs streaming to rescue ESPN.” That’s why Disney invested $1 billion in streaming service BAMTech (previously MLB’s digital arm), and why it’s touting a stand-alone service as launching later this year, with a wide variety of sports, including baseball. But it’s still unclear what viewers will get on that stand-alone service and what it will cost. And the competitive landscape is tough with so many existing streaming services, not to mention social platforms like Facebook and Twitter moving heavily into live-streaming.

Liberals Are Being Caught Up in Fake News

In the run-up to the U.S. presidential election, conservatives were sharing fake news stories online and on social media at a quick pace. While many people argued that those fake stories might have tipped the election, the truth is that they fed stories to people who were ready to believe them. And now after the election of Trump, the tide has turned. According to Snopes managing editor Brooke Binkowski, more fake news is now being targeted toward people on the Left. Why the shift? As Binkowski told The Atlantic, “It’s more wish-fulfillment stuff. ‘Trump About to be Arrested!’ Well, yeah, when’s that gonna happen?” Harry Bruinius at the Christian Science Monitor also noticed the fake news shift to the left. He mentioned a fake photo of Trump that was circulating, with his parents wearing white KKK robes. Not only is this wish-fulfillment, but it’s a way to help people who feel powerless in the current political climate.

But is there a silver lining to the fake news phenomenon? Jay McGregor, writing in Forbes, said that there are three ways that fake news might actually help journalism. One, mainstream journalists are now being pushed to do more fact-checking and are investing in stronger reporting to differentiate themselves from dubious sources online. Second, the public will now be much more aware of sources online and will be more prone to support and pay for quality journalism. And finally, social platforms like Facebook and Google have to clean up their issues with misinformation and how they support those sites with ad revenues. As McGregor puts it: “If fake news hadn’t happened, Facebook would’ve continued serving up fresh crap every day with little oversight or responsibility.” So maybe that’s the real upside to the spread of misinformation — people will value real information much more highly.

News, plus… music? That’s the strange pairing made by the New York Times and streaming service Spotify, in a new bundle offer to get both for $5 a week. Yep, you’ll get all the news and music you can consume with both services. But there is a catch: You can’t be a current subscriber of either service, and the price for the bundle will go up to $6.25 per week after the first year. Bloomberg’s Gerry Smith, who broke the news, called it an “odd-couple partnership” but noted that both companies are looking to broaden their core base of subscribers. The Times obviously has done well, hitting 3 million print and digital subscribers in the wake of Trump’s election, but that could fade over time, as Smith points out. Plus, many new Times subscribers cancel when their introductory deal runs out.

While the Times now reaches more millennials than BuzzFeed and Vice, it’s still pushing hard at expanding that audience. It’s made numerous forays into VR, and most recently launched a Snapchat channel. Getting inroads into Spotify’s younger audience of 40 million subscribers isn’t a bad thing at all. As the Times’ chief revenue officer Meredith Kopit Levien told Bloomberg, “We’re beginning to focus much more seriously on how many young people we have engaging with us and how we deepen those relationships.” This could be the first of many new partnerships for the Times, which has an ambitious goal to hit $800 million in digital revenues by 2020. But for Spotify, the deal is just more of the same. As Pitchfork’s Matthew Strauss points out, Spotify has made deals before with Tinder, and even created a new service with AccuWeather called “Climatune,” creating playlists based on your location and weather.