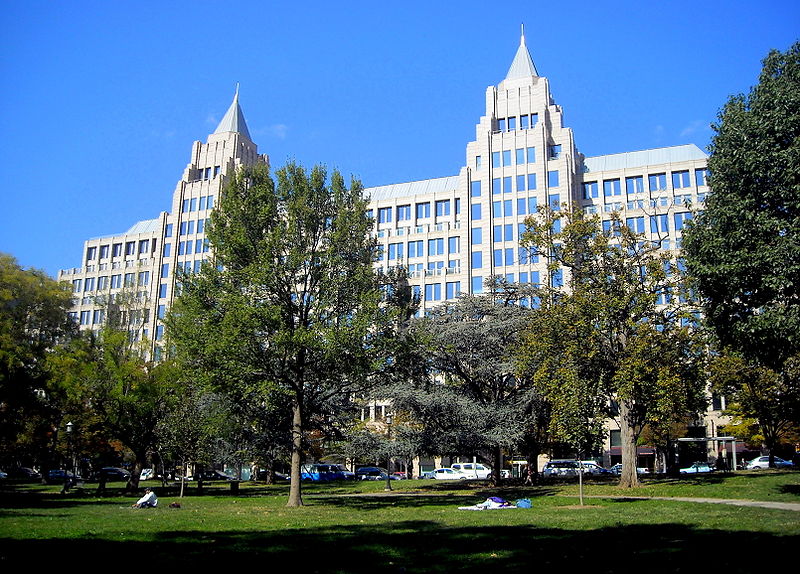 Photo of One Franklin Square, where the Washington Post is headquartered, by APK via Wikimedia Commons

Last month, we named the Washington Post as one of the best publishers on Facebook in 2016. That’s down to the way the site has grown engagement and traffic in the last 12 months.

Using NewsWhip data, we examine how the Washington Post managed to grow their Facebook engagements by almost 70% over 12 months from 2015 to 2016.

In November, the Washington Post had over 20.1 million Facebook engagements on the 10,818 articles they published that month. That’s a huge 68% jump in engagements from November 2015, during a year when many publishers struggled to grow engagement with their web-based content on Facebook.

Visitors to washingtonpost.com were at around 100 million per month in the last few months of 2016.

So, what changed for the site’s Facebook distribution in 2016?

We used NewsWhip’s soon-to-be-launched Analytics platform to break down how the Post performed on Facebook over the last few months of 2016. NewsWhip Analytics is the definitive data platform for audience development teams, with an unrivaled view of the performance of sites, authors, stories and more on social platforms going back three years. This allowed us to take a closer look at the Post’s Facebook performance over the last few months.

Given that it was an election year, that perhaps isn’t all that surprising.

While the Washington Post famously went ‘all in’ on Instant Articles almost from launch, use of that format is only one potential reason why it’s seeing increased gains.

Using NewsWhip data, we’ve come up with three reasons contributing to the Post’s success on Facebook in 2016.

Since last summer, Facebook has been trying to initiate more organic conversations on the platform. What does that mean from publishers?

As news feeds become more crowded and difficult to stand out in, this can lead to decreased reach and engagement for large ‘one size fits all’ pages, which is what many large publisher pages resemble.

Instead, more organic sharing, and shares from pages with smaller followings on more specialized topics, tend to see increased visibility. The more targeted you can be in getting your stories to the right people on any social network, the higher the engagements are likely to be. The easiest way to grow this process is by creating stories that your audience are genuinely interested in, and likely to pass on to their own network.

In order for publishers to succeed in a meaningful way on Facebook, they need to replicate that at scale. The Washington Post seems to be grasping this concept fairly well.

Through NewsWhip Analytics, it’s possible to compare the engagement on stories that came from the main publisher’s Facebook page. For example, this story has 13,427 engagements from being shared on the main Washington Post Facebook page, out of 190,983 in total.

If we look at the Post’s 10 most engaged stories from October 1 to December 31 2016 (ranked by total Facebook engagements), we can track how many of the engagements came through the main Washington Post Facebook page.

If we compare this to other top publishers, the ratios are good. Many viral publishers will see an overwhelming majority of their engagement (80% or more) on top posts come from their main Facebook page.

Being able to rely on other distribution sources means that publishers will be less susceptible to algorithm changes from social platforms.

2. Descriptive Headlines Made For Social Readers

Since an algorithm change in August 2016, Facebook has looked to reduce clickbait headlines in the news feed.

As we’ve previously noted on the blog, good headlines on Facebook tick certain boxes. As well as not tricking the reader, headlines on social work best if the have one or more of these attributes:

One of the first things you’ll notice about the Post’s articles is the descriptive and conversational tone of the headlines. For their opinion pieces, which attracted a significant proportion of the site’s total engagements in 2016, the stories were titled in a way that would pique the interests of any reader, while giving them a reason to click and read on.

But these headlines weren’t just restricted to the politics or opinion pages. In the science section, an article headlined ‘Hot dogs are now considered carcinogens. Here are roughly 480 other things the WHO says might cause cancer,’ picked up over 19,000 engagements.

Another article on climate change, which ended up being on the the site’s most engaged stories of the period, was titled ‘The North Pole is an insane 36 degrees warmer than normal as winter descends’. This isn’t exactly the type of headline you’d expect in the Washington Post up until recently.

The Post accompany the links and Instant Articles with short copy, which gives enough context to the reader to avoid being seen as clickbait, while still giving a reason to read on.

It’s not just the headlines themselves that ensure that the Washington Post’s Facebook footprint has been growing.

For traditional news publishers like the Washington Post, the ability to report exclusive news stories that haven’t already appeared on people’s timelines and news feeds is a critical advantage in building their social audience.

Those stories made up a significant part of the Washington Post’s engagements in the last three months of the year.

We can further focus on the big bumps in engagement over different time periods. Most obvious are the three numbered bumps. In each case, each rise coincides with the publication of a heavily engaged news story. Two of those were exclusive stories.

The bump labelled “1” above can be attributed to the publication of a video where Donald Trump was recorded making lewd comments about women, a Washington Post exclusive in early October.

The second point coincides with election night and its aftermath, when Washington Post readers turned to Facebook to find news of the election, as well as reaction from analysts and opinion writers.

Finally, the third point on December 5th is attributable to the publication of an exclusive news story by the Post’s investigative team, titled “Pentagon buries evidence of $125 billion in bureaucratic waste,” which attracted about 300,000 engagements on Facebook.

Taken together, these climbs in engagement point to a strong level of engagement with original reporting from the Post’s audience.

Beyond what we’ve outlined, there are plenty of other reasons why the Washington Post has been growing on Facebook and other platforms, and they include the smart use of native formats like live videos. But as this data shows, it’s still very possible for publishers to grow engagement with their web-based content in 2017.

The key is putting in place good social distribution strategies, and making sure that your organization can scale them effectively. To do that, having the right data to inform and guide the right newsroom decisions is vital.