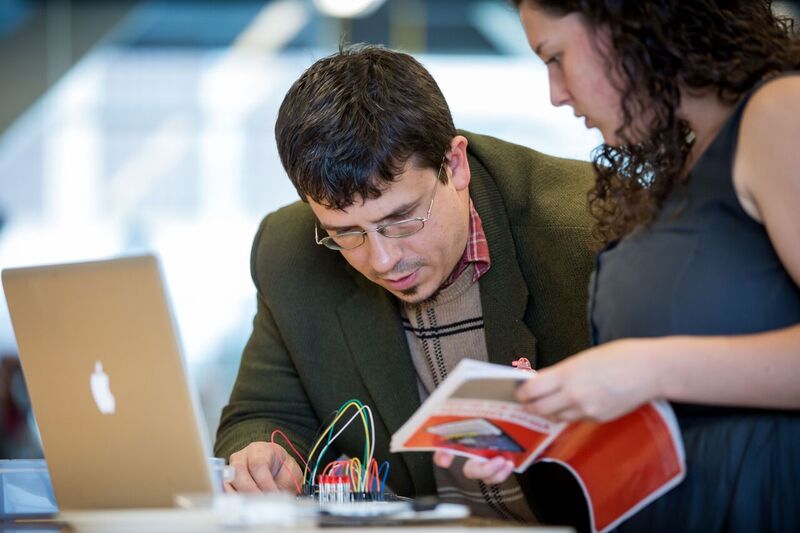 How Britten decided he wanted to teach a sensor journalism class

Britten worked to add emphases in HTML and data visualizations to his classes over the last couple of years. As he started paying more attention to data journalism, he “kept bumping up against sensor journalism, most notably in the Transit Tracker project that WNYC did,” which tracked transit outages around New York and New Jersey during storms and other emergencies.

It became clear to Britten “this was a project that everybody thought was great, but nobody was doing [projects like] it.” He started learning more about Arduino and micro controllers in general, and it became clear it would be interesting to learn more about projects like this, even though he is “neither a programmer nor an engineer.”

Britten taught the first section of “Maker Journalism” during the 2016 spring semester with 12 students. Instead of a textbook, each student bought a Vilros Ultimate Starter Kit for about $50. Britten didn’t want to make the class just about electronics. He wanted the thought process behind “making” to be central to the course, along with the idea that being able to explain the process of how to do something could inform journalists.

For the early part of the semester, Britten stressed, the students “didn’t touch anything with wires.” Their first assignment was to bring in something they made themselves. Next, they shot a video about what they made and how they did it.

The students then started working with the Arduino kits. According to the company’s website, Arduino is an “open-source electronics platform” with boards that are able to read inputs, like light on a sensor, and turn it into an output, like turning on an LED. The boards can be controlled by sending instructions to the microcontroller.

The students built all 12 circuits in the Arduino kit outside of the class and sent Vine videos of their project to Britten that showed the circuit working correctly (or not). “So you made the light blink, you made the thing play a song, you made the temperature sensor track temperatures or whatever,” he said.

During class time, Britten worked with the students to get them “comfortable with mucking around with code.” The students built a piezo buzzer, used for making beeps, tones and alerts that played Rick Astley’s “Never Gonna Give You Up” and changed the code to make it play something else. In the Arduino platform, the coding that sends the instructions to the microcontroller is called “sketches” or “sketchbooks.”

Once the students were proficient and their sensors were capable of collecting data, they could dig into the journalism part of the class. He broke the students into three groups of four. Each group had to formulate a block of questions that could be answered with temperature data. The teams came up with three projects, all on campus and indoors so they would be manageable.

Humans vs. the machines

Britten stressed the idea with the students that they shouldn’t sit around and record temperatures “every minute throughout a day” and possibly introducing human error. Instead, he encouraged them to “let the computers do what the computers do well, and we’ll do what humans do well.” The class:

Once the students had the data, Britten had to figure out what skills were needed to process the content because the students had different levels of experience in processing data, interpreting data and making graphics. “(Some groups) had a lot of broadcast students, so they had better video components than the other groups,” Britten said. “Some groups had stronger graphics students. So it wound up being a pretty good mix.” All of the work went online.

The final portion of the class was a science fair back in “Muppet Lab,” which is what the Media Innovation Center’s maker space is called. The students showed others how to make their temperature trackers and explained how they worked.

The students didn’t stop with the temperature sensors. Britten bought some inexpensive infrared motion sensors at Radio Shack, and the students built a motion tracker to monitor usage in their new building. He calls the students’ work “a collision of analog and digital” because they used a coffee cup and some duct tape to narrow the sensor’s field of vision. They also “Frankensteined” two code sketches together. Instead of the sensor setting off an alarm whenever it was tripped, it reported the time, so they could see the high and low periods of activity.

“This kind of messing around made me proud,” Britten said. “I couldn’t write this sketch [from scratch], but I could make it do what I wanted it to do.”

This is the important stuff

And it’s not just about collecting the data, Britten said. “The data itself is not the journalism. But there can’t be the journalism without the data.”

When others ask: “How is this journalism?” Britten is ready. “I always say, ‘Well, how’s writing journalism?’ ‘How is filming something journalism?’ It’s not. It’s what you do with it.” The students collect data (not journalism). Once they have the data, being able to interrogate it or identify the data they need to collect in the first place to answer the questions is the journalism.

Only one student had any prior experience with making/hacking. Britten had a lot of broadcast students and some students he taught in previous courses that he persuaded to join the class. Grades were a concern for some students because it was an experimental class, and Britten said the students needed to “feel free to fail so that they can do weird stuff.” Because the class was filled with things no one had done before, he didn’t want students to be penalized if they didn’t do it perfectly.

Britten said others can experiment just as he did. His top tips:

Eventually you become the evangelist and the great cycle continues, Britten said.

Britten said he’ll keep the analog session where students bring in something they make at the beginning, but he will probably make it shorter. He also wants them to explore building sensors that detect something other than temperature, such as noise.

Britten said teaching this kind of class is, “Just fun to me. It’s awakened parts of me that I’ve neglected for a while when you get stuck in the ropes of teaching the same thing over and over again.” He said not having a regular lesson plan to work from created “a beautiful panic. I don’t know what I’m going to do next. I’ll figure it out.”

Susan Kirkman Zake is an assistant professor in Kent State’s School of Journalism and Mass Communication, where she teaches classes in digital content creation. Her research areas include the intersection of technology and journalism, as well as media responses to disruption. She can be reached at [email protected].