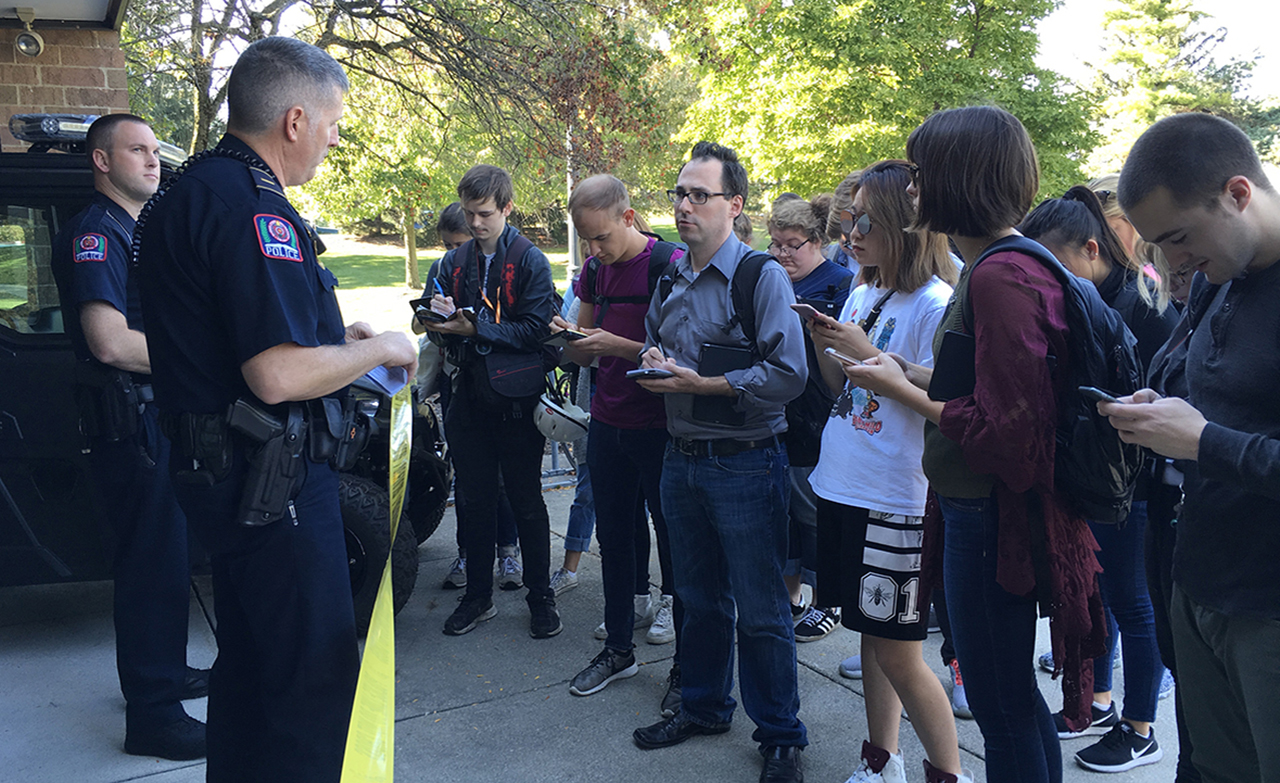 The "real" Lantern in action during the Ohio State incident Nov. 28. Photo by Nicole Kraft.

Ohio State University Police Chief Craig Stone positioned himself in front of a mass of journalists, his face set and his tone serious.

On Monday our students showed us they got it—they learned, they executed, they excelled.

There had been an officer-involved shooting on campus resulting in one dead suspect. He provided the names of the officer and the suspect. He fielded a barrage of questions, as pens flew across notepads, and iPads captured photos and video.

It would be easy to assume this scene happened after the Nov. 28 stabbing and vehicle attack that put Ohio State in the national spotlight. It actually occurred a month earlier in a class journalism simulation that put students on the front line of covering an event we all prayed would never happen.

But on the Monday after Thanksgiving break, it did happen, and the experiences from a nerve-wracking, two-hour classroom exercise suddenly transferred to very real, life-and-death coverage.

Our journalism simulation assignment launched two years ago, spurred by a desire to more deeply immerse students in learning experiences and continue building a strong working relationship with our campus police. Our chief had been visiting class each semester to talk about police coverage, and we had taken field trips to the record room. But I knew through four years of police reporting outside of Philadelphia that there was no learning like on-the-job learning, especially when it comes to covering crime.

Justin Moss and Dan Hedman, both former journalists, who coordinated communication for the police department, were eager to help, as they knew that better prepared students made better prepared reporters.

We crafted the journalism simulation script and recruited our team, with key roles played by Lt. Alex Rayner; Adam Tabor, the university’s law enforcement training and accreditation coordinator; and Police Chief Craig Stone. A belief of all three: The better we prepare students for real-world scenarios, the better they will serve the public in real-world scenarios.

Training started in class, as we discussed how police coverage works, the hierarchy of a police department and the relationship-building needed to gain trust with officers. We discussed what records are public and examined police logs and crime reports.

Even though I did not tell them we would have an “active shooter” situation, we did watch a video created by the university to prepare students for just such a scenario, now made famous by Ohio’s State’s text to students Monday: “RUN HIDE FIGHT.”

We then met at the police station for our next class session, with the instructions to imagine a text alert had been sent out by the university regarding an “active shooter.”

When we arrived, a police officer was stationed behind the tape. “Witnesses” mingled nearby to share their version of what happened, some widely varying from the actual facts.

Students questioned the officer before Rayner came out to make a brief statement and announce a media briefing would soon take. Students had that time to report the scene, interview witnesses and start reporting what they knew.

We were then ushered into the police briefing room where Stone met them to provide information and answer questions. They then wrote their stories, with just 45 minutes until deadline.

On our first simulation we cut it off there, but we soon evolved to a second briefing so they could do second- and third-lead write. We created a “Twitter” account on Slack so they could broadcast (safely) on social media.

And at the end of each session we debriefed extensively about what went right and what went wrong, with advice from police, the students themselves, Justin and me. The chief pointed out questions that were good and bad, and noted gaps that should have been filled. We compared written stories to see how speed can make facts go astray.

Some students admitted they were extremely stressed by the scenario and the pressure. They were scared to ask questions that seemed stupid and were relieved to hear how they were actually heard by police. Many felt the high that reporting breaking news can bring as you realize you are the one on the front lines of reporting what people need to know.

I was biking through Ohio State’s campus about 9:50 a.m., on my way to a meeting, when I passed by students and fire trucks gathered outside Watts Hall after an apparent fire alarm. By the time I got The Lantern office to share that there might be a fire a block from the newsroom, the “RUN HIDE FIGHT” text was out, followed soon by instructions to “shelter in place.”

Our student journalists — on staff at The Lantern and students in our news writing classes — were on the ground and in the field in minutes, reporting as good or better than any professional news crew. They had tweets, web updates, videos and photos from every angle and possible source. They reported skillfully, accurately, completely and with professionalism.

And when Stone gathered with university officials to provide a press briefing, they were front and center to report what the public needed to know.

Just like — except the stakes were so much higher.

There are few more gratifying moments in journalism education than when you realize students “get it.” They clearly express a concept, write a quality story or use proper AP style.

That day, our students showed us they got it — they learned, they executed, they excelled.

Their Ohio State journalism faculty could not be more proud.

Nicole Kraft spent 20 years as a journalist before becoming an assistant professor (clinical) of journalism at The Ohio State University. Her focus is on news writing and reporting, sports media, feature writing, social media, digital media creation, and media law and ethics. She was recently named a 2015 Apple Distinguished Educator, and her current research focuses on helping student-athletes better use technology for academics.