How to Fight Fake News and Misinformation? Research Helps Point the Way 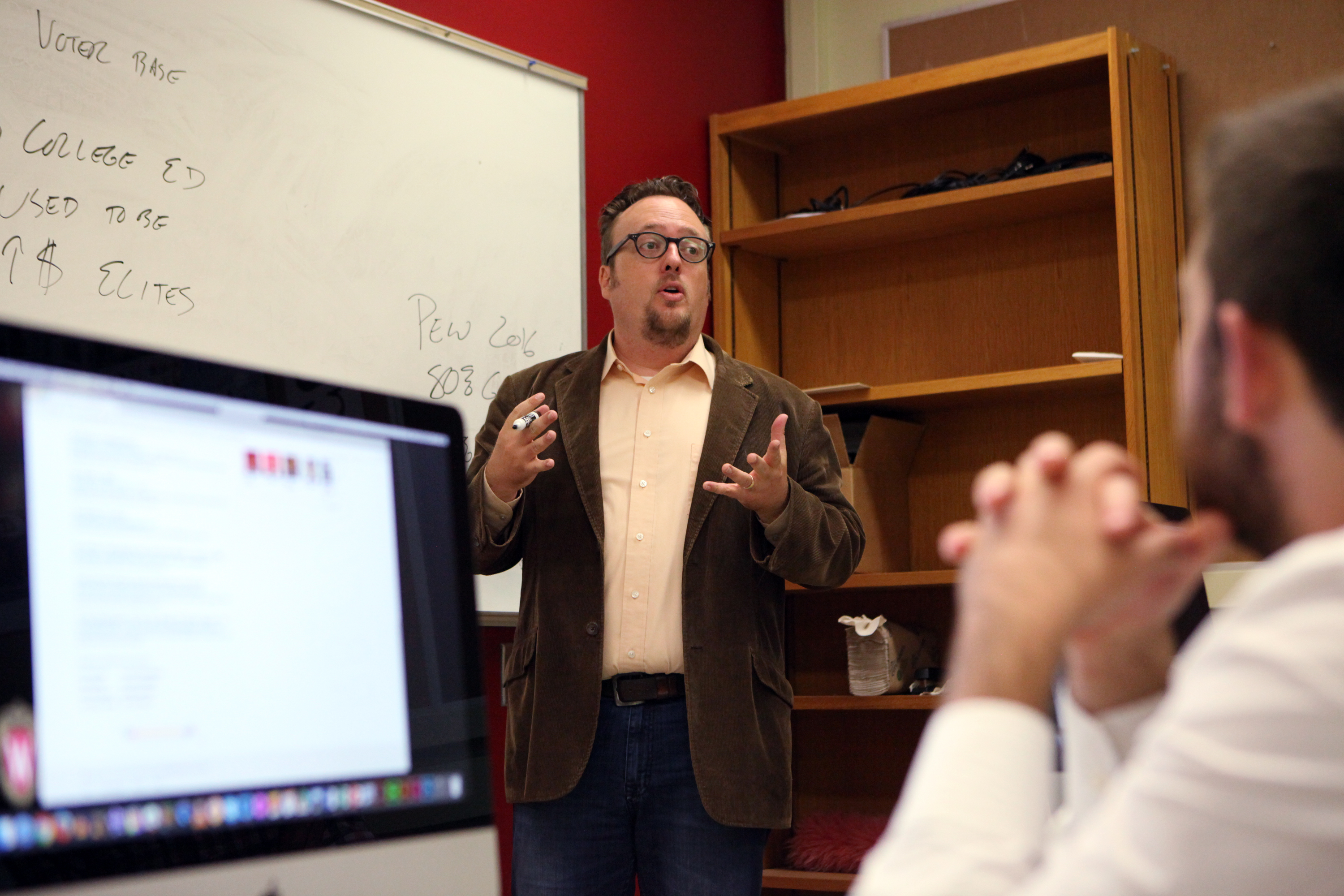 More than five years ago, Tom Rosenstiel and Bill Kovach released their guide to helping news consumers sort fact from fiction. “Blur: How to Know What’s True in the Age of Information Overload” covers many topics — how to evaluate sources, how to know whether a news account is complete, how to verify questionable claims — that are timely given the avalanche of information that circulated during this election year.

One line in the first chapter is particularly prescient given the recent influx of fake news (wholly false stories) and misinformation (false or inaccurate information): “Citizens have more voice, but those who would manipulate the public for political gain or profit — be it corporations or the government — have more direct access to the public as well.”

Rosenstiel could never have predicted the details of how this would soon play out: teenagers in Macedonia, among others, profiting off fake news they created about the 2016 presidential election that spread quickly through social media. How would he amend his book given all that’s happened in the last year?

“Fake news isn’t like a leaky pipe where you tighten it with a proper seal and then it’s fixed for 20 years,” Rosenstiel added. “Fake news and the problem it represents are more like crime and you are a police force. You can police it better or worse, but you are fighting it perpetually. You need better techniques and better technology to do it.”

Plenty of people are responding with technological solutions and lists of false and misleading news sources. Rosenstiel, a longtime journalist and press critic, founder of the Pew Research Center’s Project for Excellence in Journalism, and executive director of the American Press Institute, isn’t in the business of creating new technology. But he has plenty of thoughts about techniques journalists and journalism educators can use to combat fake news and misinformation, and provide appealing alternatives for news consumers.

His thinking is informed by not only his professional experiences but research sponsored by API that examined the effectiveness of fact-checking and how to improve its practice in newsrooms. Funded by the Rita Allen Foundation, the William and Flora Hewlett Foundation and the Democracy Fund, the studies were part of the Fact-Checking Project, aimed to improve and expand political and accountability journalism in the run-up to the 2016 presidential election.

Part one of this series examined how foundations spent recent years investing in such projects, as well as public-interest journalism and news literacy education, in an effort to promote factual journalism that competes with misinformation and fake news. After a campaign that was filled with plenty of falsehoods, many are wondering what comes next for journalism and journalism educators. Part two takes up this question by looking at recent research, and asking those involved in the projects what they have learned and what may come next.

When API surveyed more than 10,000 journalism and communication graduates last year about what they viewed as the biggest challenges facing journalism, the most common answer wasn’t the economic model of news or the public’s interest in quality journalism. It was, by a sizable margin, opinion and false information on the internet.

“That answer surprised me,” Rosenstiel said. “That’s a very strong response — there’s just too much junk out there.”

Research from API’s Fact-Checking Project, all completed before the 2016 presidential campaign began in earnest, provided plenty of grist for supporters of fact-checking. Among the findings:

Other research co-authored by Brendan Nyhan, a Dartmouth College political scientist who co-authored several of the API project studies, revealed mixed results. Studies found that correcting people’s false beliefs can be ineffective or lead them to hold onto their views even more strongly. But other research suggested that fact-checking can be effective.

Nyhan’s most recent co-authored study, which he wrote about in The New York Times just before Election Day, found that correcting Donald Trump’s false claim that the national crime rate is rising reduced the prevalence of people’s false beliefs. The study found partial evidence that questioning the validity of the correction undermined its effects on Trump supporters. Results prompted Nyhan to conclude that “Despite all the hand-wringing, we do not seem to have entered a post-truth era.”

Post-election, Nyhan argued that journalists should not give up on fact-checking Trump’s false claims but should be careful not to play into his hands. “These stories have to de-emphasize the claim itself, emphasize the news value of the president-elect being so widely irresponsible,” he told ProPublica.

Rosenstiel said he remains confident in the importance and efficacy of fact-checking.

“I think the notion of a post-fact or post-truth world is a gross misunderstanding of what happened,” Rosenstiel said. “The point of fact-checking is not to determine who lied less but to inform voters of whether or not and where political actors are stretching the truth.”

Elizabeth Good Christopherson, president and CEO of the Rita Allen Foundation (one of the API research co-funders), said in an e-mail that “despite talk of this being the ‘post-truth’ election, there are also signs that fact-checking is driving audience engagement.”

Still, there is much left to research. “The election showed that there is still a lot we don’t know about how and when facts matter,” Christopherson said.

By many measures, trust in the news media is at a record low. Focusing on getting facts right is critical to rebuilding that trust, according to a study released earlier this year by the Media Insight Project, an initiative of API and the Associated Press-NORC Center for Public Affairs Research. Respondents rated accuracy as the most important general principle related to trust.

The vast majority also said news outlet transparency — whether “I know and trust its journalists” and “it explains the way it gathers and reports news and information” — was an important trust principle.

“The election has foregrounded this question of a lack of trust,” said Tom Glaisyer, chair of the Democracy Fund’s public square program. “The lack of a newsroom-community connection, i.e. a lack of trust in news, has to be rebuilt.”

Glaisyer points to News Voices: New Jersey, a project it co-funds, as one promising model. The pilot program aims to build interest and engagement in local news by holding forums for journalists, activists and other New Jersey residents to discuss — and potentially collaborate on — issues of local concern.

All of these post-its represent people in Asbury Park who have concerns and ideas and want a voice #newsvoices pic.twitter.com/tXiUde6K64

Jennifer Preston, vice president of journalism at the John S. and James L. Knight Foundation, said such initiatives are important.

“We have a tremendous opportunity to use this challenging moment to rebuild trust,” she said. “Journalists and journalism need to do a better job listening to our communities, to engage more deeply with the people we cover, bring them into the newsgathering process and involve them in our reporting,”

One way journalists can give readers a window into the newsgathering process, Rosenstiel said, is to increase transparency and documentation. Writing for Brookings Institution, he argued that the presentation of reportorial news needs to change. “The atomic unit of news in the past was the ‘news story,’ the lovely narrative, beautifully written… The new atomic unit of news must actually be the reporting — what the story learned — and the proof that establishes it. News people must now adopt forms, templates, and structures that make that proof — the evidence — become more explicit.”

He envisions a prominently displayed box that presents questions such as “What is new about this story? What is the evidence? Who are the sources? What proof do they offer? What is still missing or unknown?”

“It will raise the bar for the verification that people put into their reporting,” Rosenstiel said in an interview. “If they have to lay these things bare and answer questions for readers that a skeptical editor would ask, that will make the reporting stronger.”

“You’ve taken news literacy and you’ve put it out into the public,” he said. “You are training readers to ask these questions. The curriculum is potentially embedded in the technology. I actually think you can teach news literacy potentially at scale by building the stories differently.”

How to teach news literacy at scale is the subject of recent research conducted by The Center for Information & Research on Civic Learning and Engagement at Tufts University with financial support from the Democracy Fund.

Abby Kiesa, director of impact at CIRCLE, said in an interview that “a constellation of approaches to teaching news literacy are needed to reach different types of young people in different locations and with different identities.”

The most high-profile of those approaches are news literacy training in schools, primarily done through the News Literacy Project and the Center for News Literacy at Stony Brook University. The News Literacy Project, targeting middle and high school students, does classroom, after-school and e-learning training, in addition to professional development for teachers. Its virtual classroom program is intended to broaden the project’s reach. The Center for News Literacy, historically focused on higher education, has taught news literacy to thousands of students at Stony Brook and provided free training and materials to educators at dozens of universities. More recently, it has broadened its reach by developing curriculum materials for high schools and the general public through a digital resource center. Next month the center is sponsoring a massive open online course, “Making Sense of the News: News Literacy Lessons for Digital Citizens,” through Coursera.

Added Larry Kramer, president of the Hewlett Foundation, which makes education grants: “Civic education and media literacy are good as far as they go, but they just don’t go very far. This is a mass society problem.”

Kiesa said she considered this concern in her research. “Beyond schools, where are the other places where people are implicitly learning things?” she said.

Another idea, similar to Rosenstiel’s, is to “explore what publishers and tech companies can do to explicitly or implicitly teach skills through what they are doing,” Kiesa said. News outlets and fact-checking groups have already contributed tipsheets on how to spot fake news.

These disparate ideas share common goals: Increase demand for trustworthy information and train news consumers to be skeptical about what they see online.

“You have to build a strong public will to take responsibility for consuming credible news,” Kramer said. “You’re never going to be able to control the flow of information.”