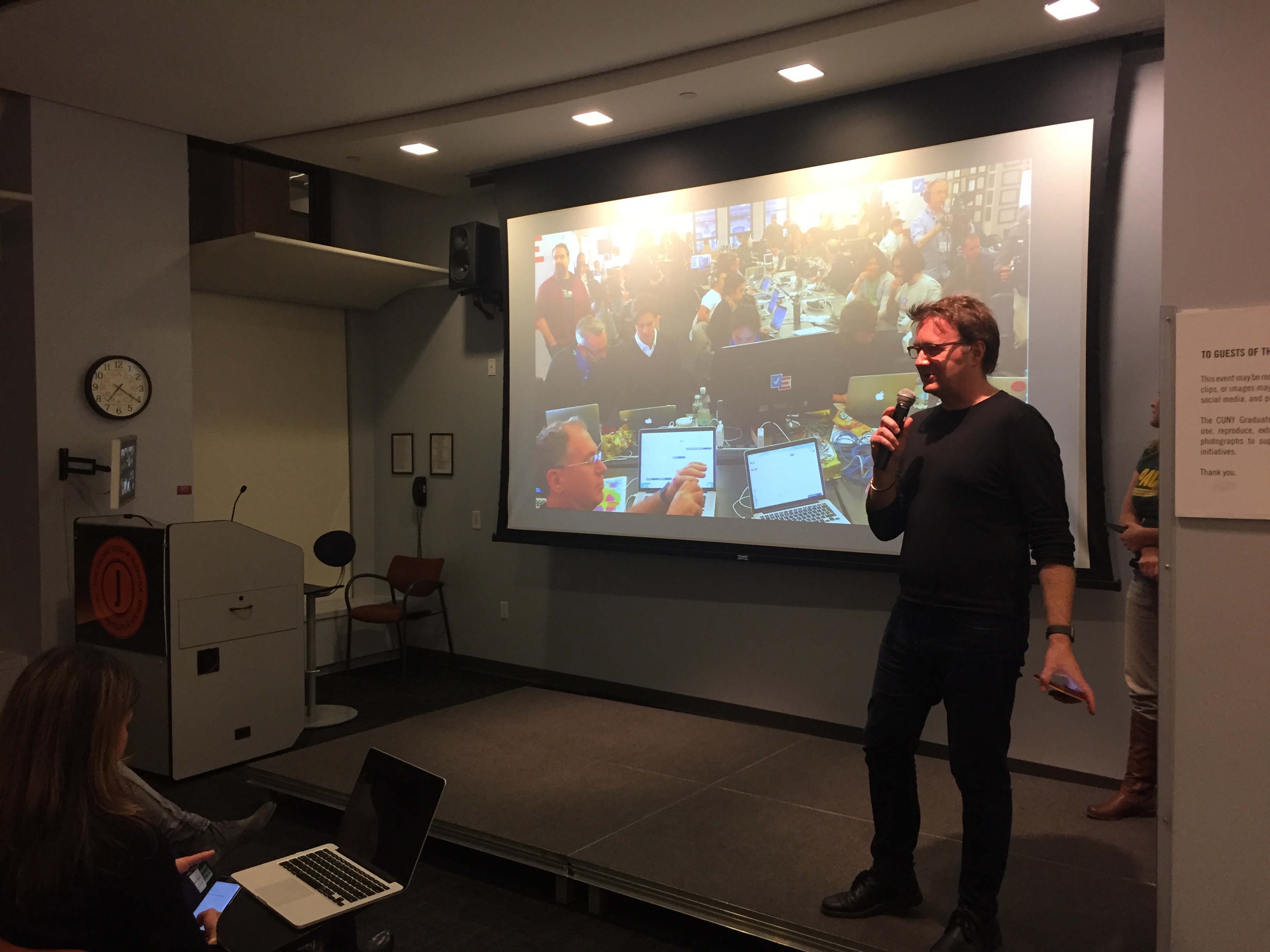 Like many of his previous tweets, President-Elect Donald Trump’s tweet about recount efforts and “millions of people who voted illegally” had zero evidence to support it. And, according to Carrie Brown, it’s just not possible. She — and hundreds of others — monitored access to voting on Election Day as part of Electionland, a coalition between ProPublica, Google News Lab, WNYC, the CUNY Graduate School of Journalism and many more.

Sure, they found voting problems here and there, but overall Election Day ran smoother than anticipated. As CUNY’s director of social journalism, Brown was part of the team that helped transform the graduate school into a makeshift newsroom for Electionland on November 8. Alongside John Keefe of WNYC, she explained the collaborative project to a room full of journalists, developers, designers and more earlier this week at the monthly NYC Entrepreneurial Journalism Night meetup hosted by the Tow-Knight Center for Entrepreneurial Journalism. At every event, they feature emerging entrepreneurial media ventures and innovators. This month’s event included two election-focused projects, Electionland and the New York Times Election Bot.

According to Keefe, senior editor for data news at WNYC, Electionland was a big undertaking; it brought together 250 news organizations, 450 journalist, 13 journalism schools, 670 students and 120 people in one pop-up New York City newsroom. In total, more than 1,100 people were involved in the collaboration. But the breadth of the project wasn’t problematic. Keefe said it was like the Panama Papers on a smaller scale.

“What’s really fascinating about this is there were no written agreements,” Keefe said. “A bunch of organizations just got behind one mission.”

That mission was to track and report on voting problems across the country and in real-time. They wanted to hear about anything and everything at the polls — long lines, machine breakdowns, voter intimidation and other barriers to voting. Electionland launched in October when early voting started across the country and continued through Election Day. From First Draft to Google News Lab, the Electionland partners developed tools to monitor election-related issues. Google News Lab, for example, analyzed search trends and data, while First Draft and Storyful lent their expertise in content verification.

The Electionland newsroom sifted through social media, platforms like Dataminr and Facebook Signal, and tips from Election Protection, a project that let people report voting issues via phone. They also relied heavily on Slack to communicate internally. Once the team verified the reports, they connected with local reporters around the country to investigate.

“We really think this is a model of how journalists and universities can collaborate when resources are stretched thin,” Brown said. “We think this could be applied to other elections, smaller elections.”

Hailey Persinger, product manager at the Times, explained how the Facebook Messenger bot gave readers automated updates about the election.

Another project that could be used in future elections is the New York Times Politics Chatbot. Hailey Persinger, product manager at the Times, explained that the Facebook Messenger bot gave readers automated updates with the latest election poll numbers, along with other news via Facebook Messenger. Though the experiment has now ended, it would text subscribers every morning with an up-to-date election forecast, news and conversational insights from the Times’ political reporter Nicholas Confessore. Subscribers could ask questions like “Will Hillary Clinton win Connecticut?,” and the bot would send the state’s forecast as a response. The key was to ensure that interactions mimicked real human conversations.

Now for something a little different:
Today through Election Day, daily FB analysis from me–direct to you! Signup: https://t.co/8qvtXC9dBi pic.twitter.com/ZBwqcLvRh4

Persinger said they were trying to simplify the way readers consumed news about the presidential election, as well as potentially reach new audiences through the Facebook platform. The New York Times launched a similar experiment back in August. Deputy sports editor Sam Manchester sent updates about the Olympics in Rio via text message. The only difference? It wasn’t automated like the Politics Chatbot. Instead, Manchester texted responses in real-time to subscribers.

“When we came down to election, we knew it wasn’t scalable to do texting back and forth,” Persinger said. “Since the election moved so quickly, we decided to try something different.”

Meg Dalton (@megdalts) is a freelance reporter and student specializing in audio at Columbia University’s Graduate School of Journalism. At Columbia, she’s recorded and edited stories on topics like the problems homeless voters face on Election Day and what it’s like being an undocumented youth in America. Before starting school, she was a business reporter for the Greenwich Time, Stamford Advocate and the Connecticut Post. She was previously the associate editor of Mediashift.org (formerly with PBS) where she covered podcasts, crowdfunding, virtual reality and all things digital media and technology.

2 responses to “How Electionland, NYT Bots Engaged Audiences Around Voting”