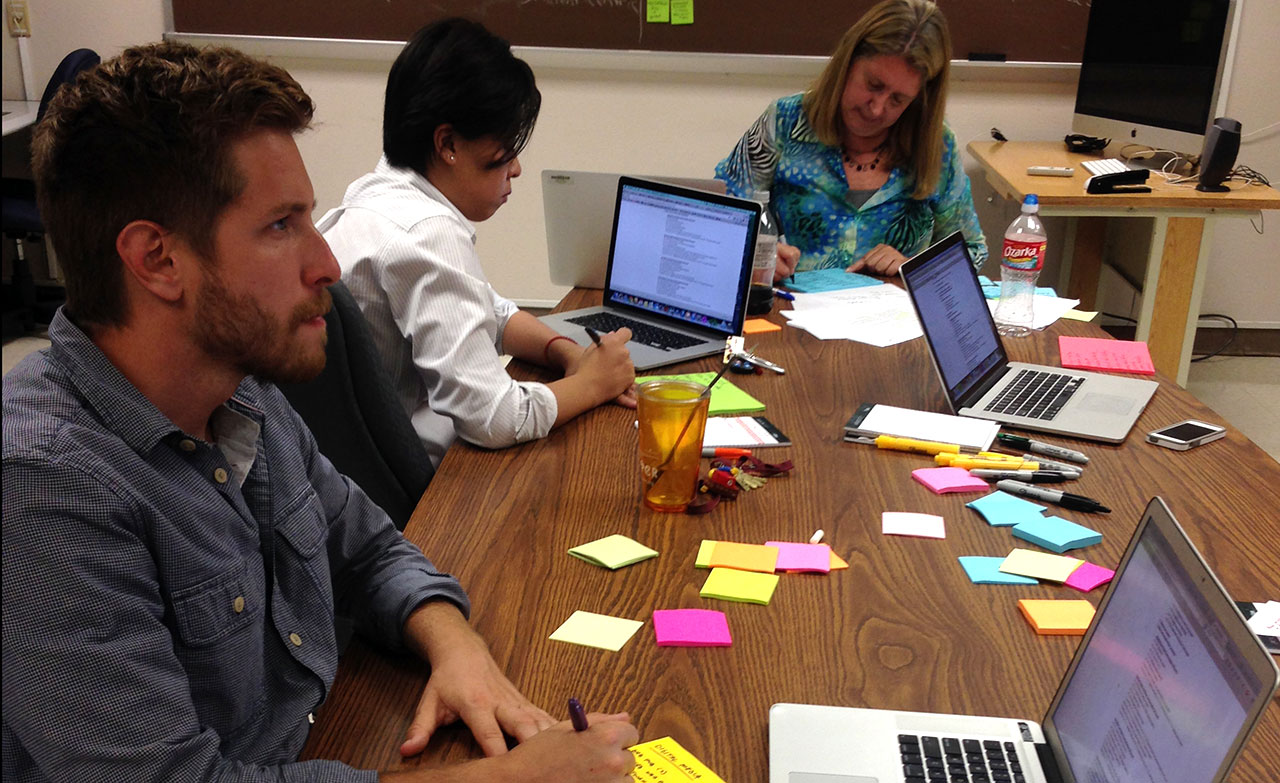 Two years ago, I returned from a John S. Knight Journalism Fellowship at Stanford University, filled with knowledge and inspiration, ready to dive back into my faculty role at Texas State University. For 10 months, I had been steeped in innovation culture, attending sessions at Stanford’s renowned d.school, visiting Silicon Valley companies and taking computer science courses. Before the fellowship was over, I began planning for what would ultimately become our new Digital Media Innovation and Mass Communication (DMI) degree. My time in the fellowship was valuable for many reasons, but mostly because it allowed me to take a step back from our program and carefully evaluate our curriculum needs and propose new directions.

In our program, we had already created several digital courses. We had even crafted a digital concentration of nine credit hours that students could combine with one of our traditional majors (Journalism, Electronic Media, Advertising, Public Relations and General Mass Communication). A Fundamentals of Digital/Online Media course that focused on general digital concepts and social media had been added as a requirement for students in all our majors. We had several other digital courses in coding and multimedia that many students took as part of requirements or as electives.

In many ways, the entire program is experimental. It's the first step toward more comprehensive mass communication curriculum development.

But while we had a required course, electives and the new concentration, as well as digital content increasing in existing courses, I felt that there was something missing from our offering. To complete the stack, I envisioned a digitally immersive program that was the focus of the degree, with other “traditional” courses in supporting roles — what might be considered “flipping” the curriculum. I’d observed industry trends where positions were available for data journalists and had watched as students moved into roles as web developers, in various positions at tech companies or as social media professionals. In some cases, students had taken one web design course, and that set them on a new career path. I wanted to create a degree that would help prepare students for new and emerging roles, as well as the inspiration to embark on their own startups. Alumni of our graduate program had been successful with our Digital Media concentration, so it made sense to consider how to better emphasize digital media at the undergraduate level.

During my time at Stanford, I had observed a gap in computer science curriculum around web development skills that was slowly being filled by for-profit coding bootcamps, like Hack Reactor and General Assembly. I felt that some of these concepts were relevant to communication fields and could be delivered in a digital media curriculum, providing a unique opportunity to introduce coding and other digital skills to our diverse population with a large percentage of female and minority students.

Hector Sifuentes, one of the first students to declare the DMI major, begins an innovation project. Photo by Cindy Royal.

One event that inspired me during the fellowship was a conference I attended in Redwood City — the DataBeat Data Science Summit. In a panel titled “A Higher Education Purpose,” one of the panelists presented a new Master of Science in Analytics program at Northwestern University that he described as “a startup in our program.” I knew then that I wanted to return to Texas State to pursue our own “startup” degree. I had been keeping in touch with faculty throughout the fellowship and started using a Google Doc to gather ideas for new curriculum. In August 2014, I assembled a key group of digital faculty that included Jon Zmikly, Dale Blasingame and Jacie Yang, for a design-thinking exercise that resulted in our “dream degree.”

The exercise focused on defining goals, reconfiguring existing courses and identifying new courses that needed to be developed. We defined the philosophy of the new degree to include several critical elements:

The following curriculum was proposed and ultimately accepted.

Core: Students in all majors in the School of Journalism and Mass Communication are required to take the same 12 hours of core courses – Introduction to Mass Communication, Media Writing, Media Law & Ethics and Fundamentals of Digital/Online Media.

Advanced Social Media and Analytics: This is a new course spearheaded by Dale Blasingame and includes strategy, research, content and analytics related to digital media careers.

Digital Media Innovation Capstone: This is a new course that addresses media innovation, technology, research and strategy that culminates in a development project.

Additionally, students take 12 hours of electives from any of our mass communication courses.

From our design thinking exercise where we initially developed the degree, it took two years to move the proposal through the 17 levels of approval required by the university. I met individually with most SJMC faculty to seek their input and approval and address any concerns. The proposal then had to be approved by several committees within the College of Fine Arts and Communication, the University Curriculum Committee, Faculty Senate, Provost and President. Then external reviews were required by Texas State Regents and Coordinating Board.

With patience, persistence and strong support from my director and dean, we received final approval from the Texas Higher Education Coordinating Board on August 4. Immediately, two students, who had been anticipating the degree, changed their major to the new DMI degree. They are currently in the inaugural Digital Media Innovation Capstone course, working on ideas for their own media startups and applications and are on track to graduate this month. We have eight students enrolled in the DMI capstone in the Spring, with more than 40 students now having declared DMI as their major.

I developed a Digital Immersion Spectrum (See Figure 1) to illustrate the range of digital options a student now has in our program and the types of career opportunities each level would support, with the highest level representing the new DMI major.

Figure 1. The Digital Immersion Spectrum illustrates the role of digital media concepts and skills in the School of Journalism and Mass Communication at Texas State University. Photo by Cindy Royal.

Hector Sifuentes, one of the first students to declare the DMI major, is excited about the opportunities the new major represents. “Coding and web design changed my life,” Sifuentes said. “I can see the future of digital media through learning about coding, design and entrepreneurship.” Sifuentes plans to work with clients in his own digital creative agency after he graduates.

Shay Fleming, another of the program’s initial students feels the new major fills a void in mass communication curriculum and provides broad career options. “The DMI major took an empty space where I had already geared my focus with regard to technology in mass communication and turned it into a degree,” Fleming said. She lists the areas of social media, content marketing, web design as potential career directions. “I love all aspects of technology in communication,” she said.

Texas State senior lecturer Jon Zmikly feels the new degree uniquely meets the needs of new and emerging careers. “We began noticing a number of students who were interested in technology like 360 video and drones, as well as coding,” Zmikly said. “A new major focused on innovation was a perfect opportunity to provide a place for that curiosity to grow.”

Dale Blasingame works with students on the Electionland project in the Media Innovation Lab. Photo by Cindy Royal.

In many ways, the entire program is experimental. It’s the first step toward more comprehensive mass communication curriculum development. It is part of our newly launched Media Innovation Lab, where we will continue to explore storytelling techniques using social media, coding, virtual reality, drones, sensors, 3D printing and other emerging platforms. In addition to the above curriculum, we have also developed a short course series delivered each semester on cutting-edge topics, a digital media innovation speaker series held each Spring and a longer-format coding bootcamp offered during summer term.

There will be challenges in finding faculty who can teach and advance with these emerging concepts. But I’m excited to see where this program leads students and optimistic about the innovation it has already inspired. My hope is that the DMI major will influence other programs to experiment with radical curriculum change that is in step with the emerging needs of the digital marketplace.