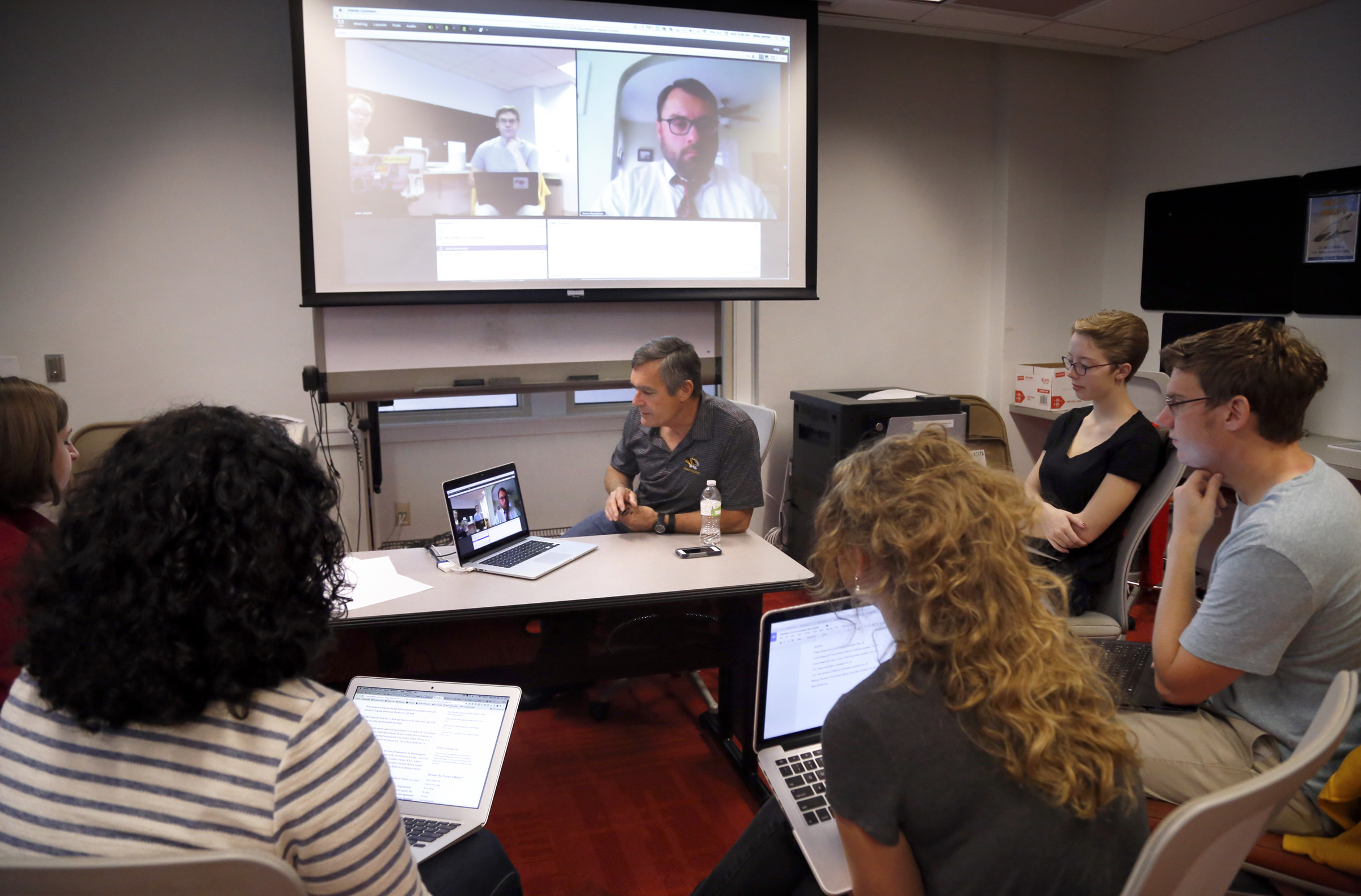 The Missouri School of Journalism partnered with Politifact to teach students how to fact check political speech. Here the class debates a story's rating in what PolitiFact calls the "star chamber." PolitiFact Executive Director Aaron Sharockman appears via videoconference at the right of the projection screen; Professor Mike Jenner is at center. Photo by Stephanie Mueller/Columbia Missourian

When the Missouri School of Journalism decided to partner with PolitiFact and create a class on fact-checking political speech, I thought it would be challenging and educational.

In the very first week of the semester, I realized the class would be all that. I learned it also would be something else: exciting.

The weekend before the semester began, we held a boot camp to immerse students in the transparent and straightforward discipline practiced by our partner, PolitiFact. After identifying a statement by a politician or officeholder, the first step in the reporting process is to ask the speaker for the evidence to back up the claim.

A detail of PolitiFact/Missouri’s landing page

Reporter Allison Graves had chosen to fact check a statement by Gov. Jay Nixon, who had said at a state fair breakfast that nearly 90 percent of the cost of turning Interstate 70 into a toll road would come from outside Missouri. Allison asked for the data behind his statement.

The response? The governor’s claim was part of an “extemporaneous answer” to a question. In other words, he didn’t really have the data to back it up. He was winging it.

We were off on a journey that’s turned out to be an illuminating and exciting experience for readers, voters and our students.

In August of 2015 we launched our partnership with PolitiFact, the Pulitzer Prize-winning news organization that has made fact checking a vibrant component of the modern news ecosystem.

Since then, PolitiFact’s national reporters have checked hundreds of statements made by and about presidential candidates. The students in our class focus on people and issues in Missouri below the level of the presidential campaign.

We serve as PolitiFact’s Missouri bureau, covering politicians, officials and interest groups out to influence elections or public policy. From races for the U.S. Senate to the governor’s office to campaigns of those seeking seats in the statehouse, we’ve had no shortage of newsworthy claims and speakers to check.

When stories are finished, they’re edited first by me, then PolitiFact Executive Director Aaron Sharockman. Then they’ll go through the same vetting to determine the overall rating — from “True” all the way down to “Pants on Fire” — that all PolitiFact stories must undergo. The review of the rating, known in PolitiFact as “the Star Chamber,” involves three voting editors or staffers following a consistent rubric of questions. Whenever possible, we involve the students so they can experience this process.

Stories get a final edit by Columbia Missourian Editor Tom Warhover, then by the Missourian’s copy desk. Then the stories are co-published on www.columbiamissourian.com and on PolitiFact’s national site — www.politifact.com.

After helping create the class and representing PolitiFact for two of three semesters, Aaron is a believer. “Working with students and the university was an experiment for us and one I’m glad we pursued,” he said. “Their work stands up alongside any other fact-check on our website, and they truly are helping sort out fact from fiction for Missouri voters.”

Lessons Taught in the Class

Aaron typically will join us one day a week via the Internet, often from the presidential campaign trail. Periodically we’ll be visited by guest speakers — sometimes other PolitiFact staffers, but occasionally reporters from the Washington Post fact-checking team or from other news organizations.

We examine the role of fact-checking in journalism and democracy and how segments of the public understand and perceive it. We’ll also teach students how to find data and sources to inform their stories and substantiate or refute claims. Experts will share their tips on navigating the vast trove of Census data and finding and interpreting key economic statistics to make them relevant to readers. We’ll dive into campaign finance reports and lobbying records, and discuss how to find unbiased experts who can offer thoughtful insight as third-party sources.

The Truth-O-Meter is PolitiFact’s unique way of describing the truth or falsity of a claim.

Grad student Adam Aton, whose work in the class helped him land an internship with the Associated Press covering the Missouri legislature, had this to say about what he learned: “The PolitiFact class pushed me to pursue accuracy even more aggressively. I now demand more backup information from my sources because, really, there’s nothing wrong with asking your sources how they know what they say they know. Journalists are told to never print something we don’t understand — but how often do we print information that our sources aren’t quite clear on or don’t have backup for? Sometimes we don’t know how credible our sources are because we don’t ask where they got their facts. I think we should do more of that.”

Allison Graves earned a summer internship with PolitiFact’s national team that stretched through the summer and into the fall, helping to cover the presidential campaign. “PolitiFact Missouri has meant a lot to me,” she said. “It gave me the skills and the know-how to hold all politicians accountable before I moved on to my internship with the national PolitiFact staff.

“In the class, I was able to sharpen my research skills and practice writing in a way that makes sense to everyone. The class also challenged me to report more aggressively in pursuit of the truth. It’s not always easy to challenge politicians, but the class at MU helped me understand the best way to do it.”

The class is small, but students are devoted to the work and excited about the chance to do stories with impact. It’s the perfect venue in which to practice what we call the Missouri Method — doing meaningful journalism on critical and relevant issues and people in front of a significant audience. It has its moments — on occasion my students and I have been yelled at by some of the most powerful politicians in the state who’ve not been pleased with unfavorable rulings or reporting that revealed falsehoods or misleading spin.

But the work matters. And I believe it is making a difference. Since Politifact Missouri burst on the scene a little more than a year ago, top politicians seem much more careful in choosing their words, knowing that a young reporter is likely to call, asking for the evidence that substantiates their claim.

Mike Jenner is a professor and the Houston Harte Endowed Chair of journalism at the University of Missouri. He joined the Missouri School of Journalism faculty after a career as a newspaper editor, most recently at The Bakersfield Californian.