How Mission-Driven Storytelling Can Connect with Audiences 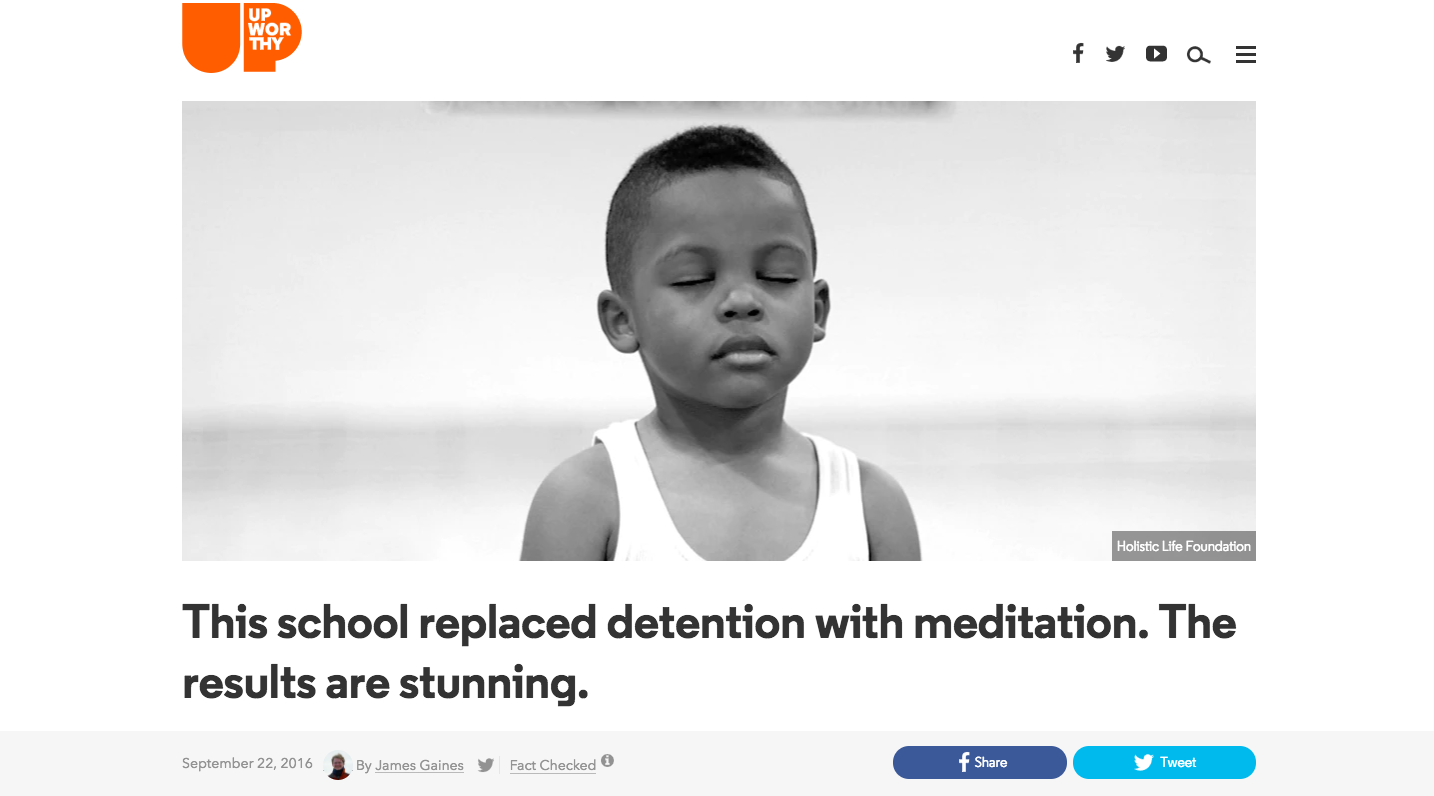 An Upworthy story about schools replacing detention with meditation reached over 14 million people.

New doors are opening for using mission-driven journalism as a vehicle to create change. It’s also an opportunity to reach new and more diverse audiences.

Beyond just finding facts and presenting them to an audience, journalists must also help readers understand how the facts and stories fit into their lives, she said late last month at an event hosted by Be Social Change, a New York-based “social impact community,” at the CoLab Factory in Brooklyn, New York.

Nadia Reiman, a senior editor at Latino USA, and Thomas Page McBee, the editorial director for growth at Quartz, said identity will continue to play a big role in the future of who makes media. For both, their decisions to work in journalism first came about as a way to share their stories and ensure that stories of other people like them are more visible.

McBee, who is transgender, said he wasn’t able to tell what he called a more “true” story of the trans community because of gatekeeping editors who only wanted one kind of story.

“I think the media’s place is definitely to contextualize and educate, but also to lift voices up, and that’s a new, exciting place in media,” he said.

Reiman pointed out that there aren’t many people of color in public radio, despite that the job of public media is to represent what the U.S. is.

Tina Rosenberg, a co-founder of the Solutions Journalism Network and one of the authors of the New York Times’ Fixes column, said the most significant change in media has been its methods of distribution – and the complete collapse of traditional business models – rather than content.

“It’s a tremendous time to be a freelancer,” she said. “There are thousands and thousands of places to write, whereas before there were very, very few. The problem is most of them don’t pay very well.”

But the collapse of the industry is also the reason the Solutions Journalism Network has been able to gain a foothold, Rosenberg said.

“Media people know we need to do something different,” she said. “What we’ve been doing doesn’t work.”

Data journalism is also another form of storytelling that has risen to prominence in the aftermath of the industry’s collapse, as is explanatory journalism and opinion content – since websites need content but can’t pay well.

The biggest issue for today’s newsrooms, Rosenberg said, is that they must manage scarcity. Newsrooms have fewer reporters, who are expected to file stories around the clock, as opposed to just once a day as in the past.

One solution is to cut low-value product. For many newsrooms, that means no longer spending time on doing the same stories that hundreds of other outlets are covering. Instead, newsrooms are concentrating resources on enterprise stores: “Here’s stuff that we’re bringing to you that you cannot get elsewhere, and this is value we’re bringing to you,” Rosenberg said.

Readers won’t pay for plain facts, but they will pay for good journalism and knowledge, she said.

Traditional media outlets, including the New York Times, are even starting to look for foundation grants, she said.

Upworthy is still a startup and does still receive funding from investors, as well as other sources, including branded content.

But the site is still at a point where it needs to experiment with different ways of creating revenue, Gritters said.

She said that publishing positive stories has helped Upworthy become a “destination” website, and helped grow a dedicated audience – which is also important for the monetization of the site further down the line.

People want to be the person that knows the trendy solution, Gritters said, especially in an era when consuming media – particularly that relating to the 2016 U.S. election – can be so draining.

“To have something that feels uplifting and actionable is really important,” she said.

Upworthy carefully analyzes its analytics to determine which stories get the most likes and shares on social media. Their goal is to apply the formula that leads to “fluffy” stories going viral to the pieces that are not quite so fluffy.

Reiman said podcasting – which is more popular now more than after after the debut of Serial – has thrown a monkey wrench into the business models of public radio.

Additionally, there are more for-profit producers of content that ever – which leaves public media trying to figure out its place in this new ecosystem.

Gritters, who manages Upworthy’s freelancers, sifts through roughly 200 pitches a week – and will choose only three or four, she said.

When vetting pitches, she asks: Will this story make the world a better place if a million people looked at it?”

She said that when less thought is put into stories – when they’re rushed and less polished –metrics also go down.

It really does pay to tell a good story, she said.