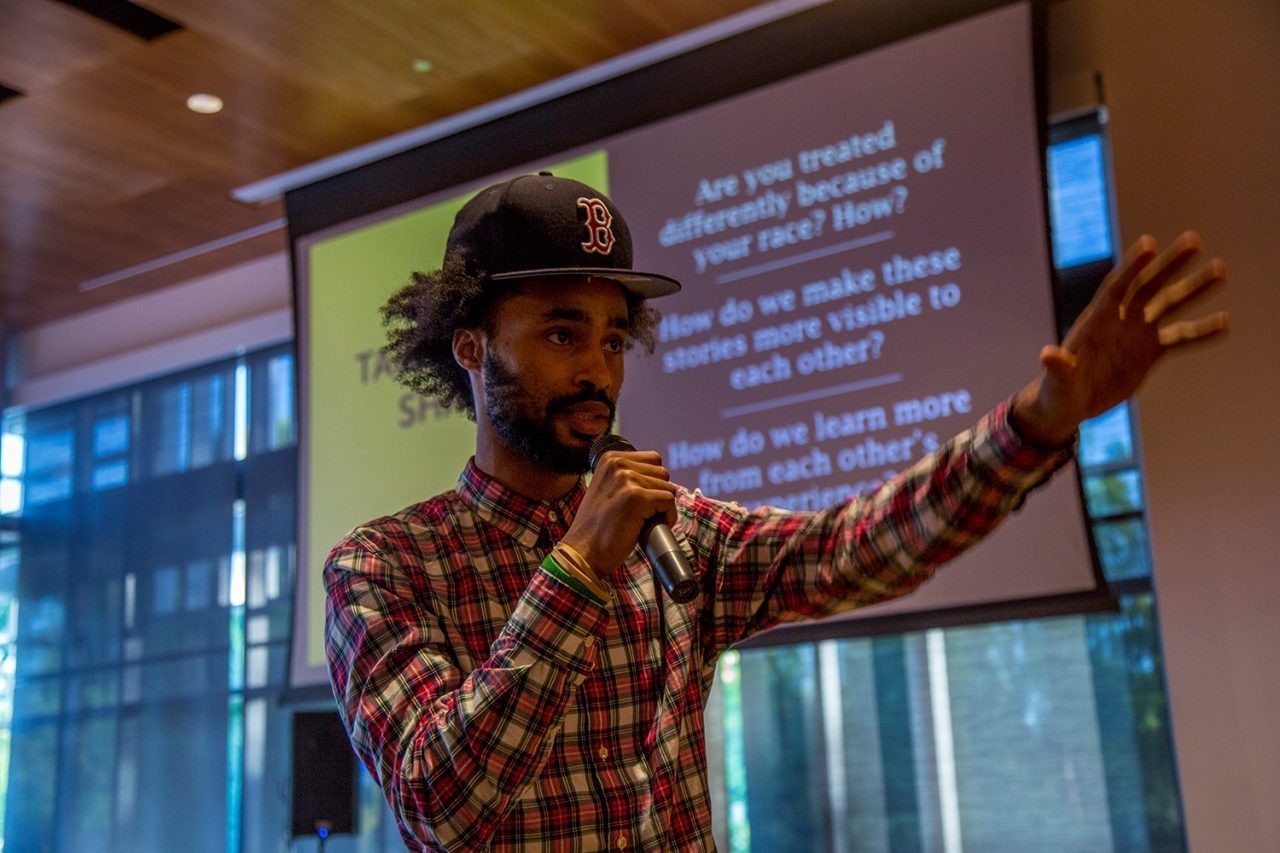 A student engages in a discussion on race at a community engagement forum at the University of Oregon. Photo by August Frank

Community engagement is front and center in discussions over journalism’s future. But what is it really like to bring our communities into the storytelling process?

A team of 16 students at the University of Oregon School of Journalism and Communication gained some fresh insight into the issue when they spent six months exploring issues of race and identity alongside a passionate  — and sometimes skeptical — community of stakeholders.

The idea was to flip the traditional story development process. Instead of a group of reporters and editors brainstorming story ideas based on their own experiences, the students at Flux Magazine wanted to deepen and broaden their scope. If a journalist’s job is to tell stories about a community, it only makes sense to first ask the community what stories need to be told.

That spirit of community-centered, “nothing about us without us” journalism grew out of last fall’s Experience Engagement conference, co-hosted by the Agora Journalism Center and Journalism That Matters.

The result was a powerful lesson in storytelling.

Now that the project is finished — check out this documentary from OR Media — we wanted to share five takeaways for students and professional newsrooms alike.

Ask 12 journalists to define “engagement” and you’ll likely get 12 different answers. It’s an evolving concept. One thing we learned quickly is that it’s critical to get your definitions straight. Otherwise, it can be difficult to explain what you’re doing and make decisions.

Community members gather with student journalists at the University of Oregon for the first of two engagement sessions on race and identity.

One idea that framed our thinking was the notion that engagement is relational, not transactional. All too often, reporters approach their work as a series of short, one-time transactions — get the quote, get the story, get the click. Instead, we wanted to explore what would happen if our student-storytellers went deeper and created what Jennifer Brandel of Hearken calls a continuous “feedback loop” between journalists and audience.

We wanted to explore journalism as a conversation.

Settling on this definition early on gave clarity to our mission and allowed us to rally partners. It also gave us a framework for making strategic decisions that paid off later — from recruiting staffers with community outreach skills to securing funding for public events.

The average American’s trust in the media has never been lower. It can be tricky to get people to agree to an interview much less participate in a series of face-to-face conversations over a sustained period of time. In our case, the skepticism toward our project was compounded by the fact we were exploring a topic that many people are reluctant to discuss.

So how do you get people to open up and participate?

One way we found is simply to listen. Our first event was designed as a facilitated conversation — a way for people to share personal perspectives on race. Our moderator, former Seattle Times Executive Editor and founding director of the Agora Journalism Center Mike Fancher, gathered people into small groups to talk about their experiences. It wasn’t a debate or a lecture, a gimmick or a fraud. It was simply a moment to set aside preconceived notions, open up to new ideas and maybe even be surprised.

And our students and faculty participated, too. That set a tone of equal investment and participation, which encouraged participants to cultivate relationships among themselves. One of the most rewarding moments was seeing people continuing conversations in the hallways and exchanging emails.

Feedback, we learned, is a wheel that can have many spokes.

Andrew DeVigal of the Agora Journalism Center at the University of Oregon leads a community engagement session on race. Photo by August Frank

Approaching journalism as a conversation requires giving up a measure of control. You’re engaging with regular community members who are donating their time and have their own ideas about how things should work. The results can be messy and unexpected.

That’s a good thing — so long as you’re willing to roll with it.

A few students entered the process planning to pursue specific story ideas, only to have those ideas challenged — and reshaped — by community members. We encouraged students to listen closely, and authentically, and to avoid seeking quotes simply to fit some preconceived notion of what the story is.

The journalism was stronger for the discussions, and that’s the beauty of engagement. Journalists tap a rich vein of potential story ideas, real-world perspectives and a built-in audience.

The main requirement is that they be open to it.

Perhaps the biggest tension was around the idea of ownership. When you’re making a deliberate effort to include voices from the community, who makes the calls?

Award-winning Flux Magazine rolls of the presses at the University of Oregon School of Journalism and Communication.

This issue surfaced when one of our student’s key sources — a retired history professor who’d taken a keen interest in the work — asked to review the cover story before publication. It was a reasonable request, especially for somebody who felt his words had been misconstrued by reporters in the past. While most traditional reporters would say no, we wondered: did our more inclusive approach demand a different set of journalistic norms?

The students allowed the professor to review the story but only after lots of discussion on deadline. In hindsight, it seems good practice to establish those ground rules up front.

In many ways, community engagement is just simple beat reporting. A journalist picks a subject, reaches out to key people who are affected, builds relationships over time and ultimately becomes a stakeholder in that corner of the world.

What makes beat reporting successful is time, and the same goes for engagement. We spent six months on this project — an eternity for many newsrooms — yet it still seemed painfully short.

But that’s the thing about engagement. It forces you view journalism on a different, slow news kind of time scale.

Ultimately, the product isn’t just the journalism itself but the connections that emerge — and endure. And if we learned one thing from this project, it’s that communities are willing and eager to participate these kinds of conversations.

Todd Milbourn is an instructor of journalism and media entrepreneurship at the University of Oregon School of Journalism and Communication.