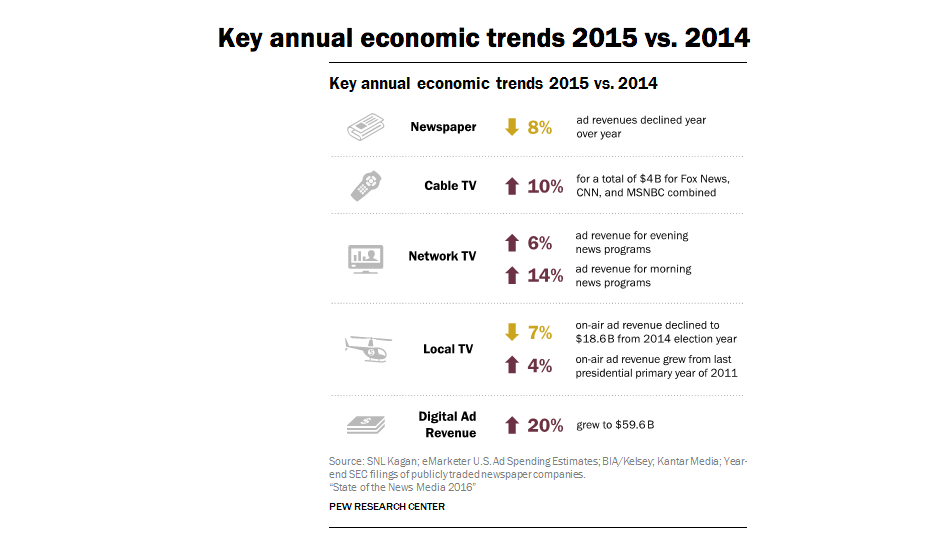 The Pew Research Center released its annual "State of the News Media" report on Wednesday.

As expected, the Pew Research Center’s annual “State of the News Media” report delivered more sobering news for the newspaper industry on Wednesday:

But it wasn’t all gloom and doom in the annual report. Here are four findings and trends that bode well for the state of the news media in 2016.

"In 2015, mobile ad spending reached $31.6 billion — a 65 percent increase that helped it surpass desktop ad spending for the first time."

Digital advertising spending reached nearly $60 billion in 2015, a 20 percent increase from 2014. This is faster than the growth rate in the previous three years, when digital ad spending grew only 15-17 percent each year.

The caveat is that most new digital ad revenue didn’t go to news publishers last year; it went to technology and social media companies. In 2015, five companies — Google, Facebook, Twitter, Microsoft, and Yahoo — combined to haul in 65 percent of all digital ad revenue, up from 61 percent in 2014.

These numbers reflect the huge role that tech companies now play as curators and distributors of news and media content online. Jesse Holcomb, Pew’s associate director of research and one of the report’s co-authors, says the increasingly symbiotic relationship between social media platforms and news publishers will be an especially important trend to watch in coming years.

“We know news is an integral part of the social media experience, but what happens when the economic underpinnings of the news publishing industry continue to slip?” Holcomb said in a phone interview. “Will we start to see a tipping point in terms of what is populating these feeds? And will these [tech] companies respond in kind?”

Other digital revenue trends outlined in the report include the growth of mobile advertising, especially video ads. In 2015, mobile ad spending reached $31.6 billion — a 65 percent increase that helped it surpass desktop ad spending for the first time.

Broken down by category, banner ads are still the king of digital display advertising, but video ads are closing the gap. In 2015, spending on these ads grew 46 percent, compared to 12 percent growth for banner ads.

A screenshot from the Pew Research Center’s 2016 “State of the News Media” report.

Non-profit and Public Media are Diversifying and Increasing Revenue

While non-profit news organizations still rely heavily on foundation funding, they continued to diversify their revenue in 2015.

According to a Knight Foundation study of 20 local and regional digital news non-profits, 58 percent of total revenue came from foundations in 2013 — down from 63 percent in 2011. These news organizations’ share of earned revenue (including sponsorships, events, advertising, subscriptions, etc.) grew from 18 percent to 23 percent over the same two-year period.

Meanwhile, the size of the overall revenue pie also continued to grow for non-profits, with the median revenue for these 20 organizations increasing 45 percent from 2011 to 2013 and reaching $518,000.

In the public media sector, both underwriting and individual giving for public radio increased in 2014, continuing a 5-year growth trend, according to data from the 125 largest news-oriented public radio licensees. These gains helped push total revenue nearly 25 percent above 2008 levels.

But even as revenue continued to grow, membership for public radio stations leveled off in 2014, following five years of growth.

The Audience for Podcasts is Still Growing

Despite this growth, podcasting still represents a small sliver of the overall news media landscape, and an even smaller slice of its revenue picture. In 2015, for example, advertisers spent only $34 million on podcasts.

The report’s authors suggest that poor audience metrics might be holding back advertising revenue growth: “The main way a podcast’s audience is generally measured is through downloads,” the authors wrote. “Download data, however, is limited in that the statistics do not identify if the podcast downloaded was actually listened to, either in part or in its entirety, or how many different people may have listened to the podcast. The limitations of these download statistics have had downstream implications for advertisers, who need audience data to drive buying decisions.”

The good news for podcast producers is that several organizations, including Nielsen, are working to develop richer metrics. This might help explain why the New York Times, the Wall Street Journal, BuzzFeed, Slate, and others have all launched podcasting divisions in recent years, making it likely that podcasts will continue to represent a growing share of news and media consumption.

A screenshot from the Pew Research Center’s 2016 “State of the News Media” report.

This year’s report revealed almost no positive trends in the print newspaper industry, with one notable exception: Circulation at weekly and semiweekly Hispanic newspapers in the U.S. grew 2 percent in 2015, with roughly half of the newspapers included in the study reporting year-over-year circulation gains.

This finding was a stark outlier in the report, which detailed continued circulation losses for daily and weekly English-language newspapers in the U.S., as well as for Hispanic dailies.

But Holcomb says the circulation growth for Hispanic weekly and semiweekly newspapers is consistent with the relative success of community newspapers compared to their larger, less nimble daily counterparts. “It largely mirror some of the trends we see in the broader media landscape,” he said. “In some cases, these smaller weekly or community newspapers are taking advantage of scarcity. They’re serving very specific populations with information those populations aren’t going to get elsewhere.”

Holcomb cautioned against “reading too much in the tea leaves” based on one year’s results. “There aren’t any straight-forward explanations that are emerging in those data,” he said.