Why You And Your Students Should Work To Improve Wikipedia 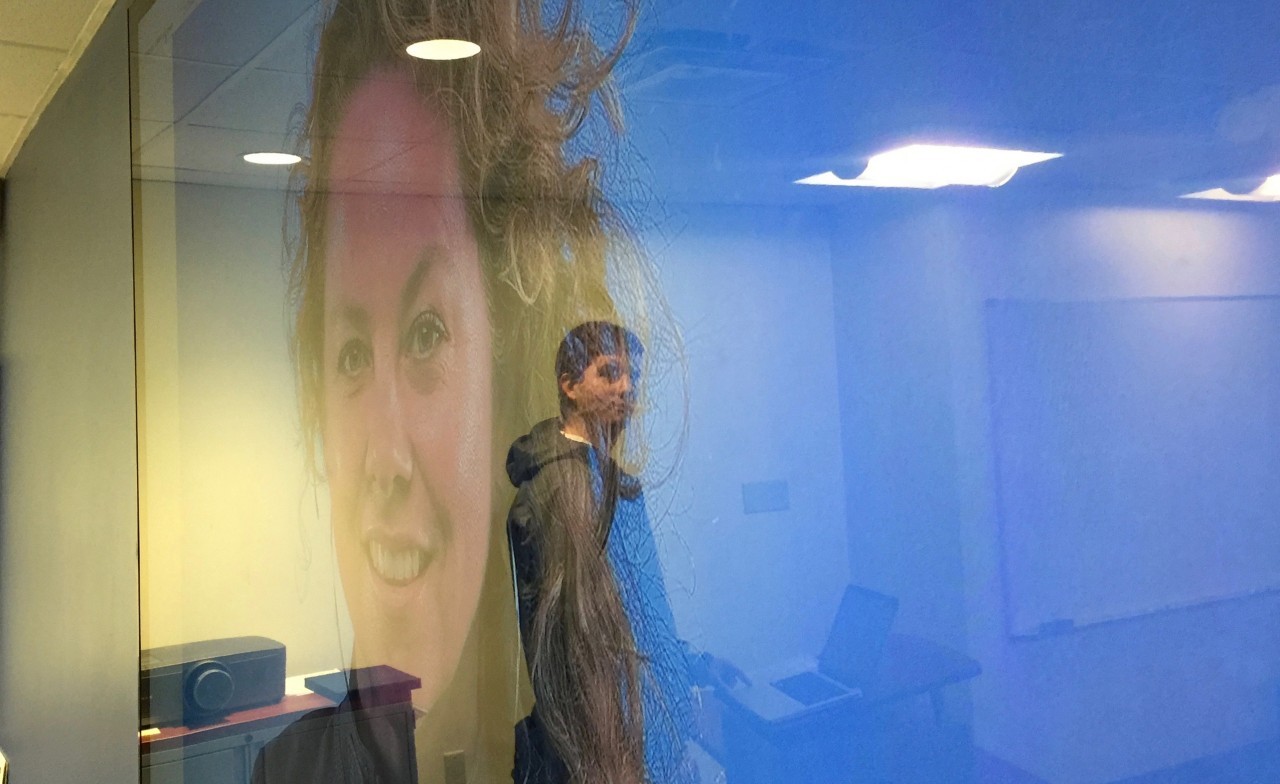 WVU student Jake McGowan presents his research on Los Angeles Times Pulitzer and Emmy Award winner, photographer Barbara Davidson. Despite these notable awards, there was no Wikipedia page on Davidson until McGowan created one as part of a class project. Photo by Nancy Andrews.

There’s a serious issue with Wikipedia: It severely under-represents women and people of color. What happens when professors turn to the classroom to improve it? Some students gain a deep sense of purpose, become an authority on a subject, and question sourcing, perspective and point-of-view as never before.

First of all, don’t dismiss Wikipedia. It is more important than we give it credit for in the academic or journalistic world. Wikipedia, though “banned” from many classrooms, is likely read by many of our students. So far in 2016, the site has regularly attracted about 120 million U.S. visitors each month, according to comScore. It also tops Google’s search results pages. Let’s face it — Wikipedia is a more popular resource than the majority of news sites.

“How do you go find the other people, the other voices?” - WVU Teaching Assistant Prof. Mary Kay McFarland

This academic year, we experimented with our Introduction to Photojournalism course to see just how we might help. Here at West Virginia University, we held a “Tackling the Gender Gap” session during Spring 2015. Although I was not yet a professor at WVU, I read about it on social media and felt it was an important issue.

Once on campus in Fall 2015, I charged students with writing biographical articles on photographers to counter Wikipedia’s gender bias against not only women, but people of color, as well.

My class was shocked by the assignment, and so were other classes in the spring. “Up until now, I was told ‘stay away from Wikipedia,’” WVU student Rachel Solis said.

“It’s a big NO-NO,” classmate Aishina Shaffer added. They responded to the charge of researching and writing for the world, rather than an audience of one (me, the professor).

While students were in agreement about the importance, it was a bit of a topsy-turvy endeavor — even with the help of Wiki Ed and our Wikipedian-in-residence Kelly Doyle. By spring semester, with a more refined Wikipedia curriculum, and a partner in Teaching Assistant Professor Mary Kay McFarland, the class ran smoother.

Who is Notable? Who Defines It?

In selecting photographers to profile, we looked at pages already on Wikipedia that needed help — these are affectionately known as stubs. We also looked for photographers who had made significant contributions, received high honors or held important positions. We sought to correct instances where male and female co-winners of the Pulitzer Prize had been treated differently – the male had an article page, the female Pulitzer winner did not. We saw this as a pretty safe standard, albeit a still problematic one, because important early work in an area often doesn’t get recognition.

Still, one of the first pages was rejected in minutes with the following explanation: “Submission is about a person who does not meet notability guidelines.” Granted, not much had been written about this person, but sources were reliable and sufficient to prove she’d been recognized with journalism’s highest honor, the Pulitzer Prize. After consulting with other Wikipedians, I published the page.

While we did have Wiki editors question our work, none of the professors I’ve spoken with experienced the nastiness described in the Atlantic article, “Wikipedia’s Hostility to Women.”

“Everything about the assignment makes you question perspective,” McFarland said. “The work of many female and people-of-color photographers comes from their perspective. The lack of coverage of their work is another point of view of what’s important.”

And the information that does exist is often incomplete, Shaffer explained after researching former White House beat photographer Diana Walker. “It was a little hard,” she said. “A lot of the sources have the same information.” This revealed another issue we see in journalism – repetition of the same facts, over and over and over, with few offering anything substantially different.

There’s also the question of who is “notable” and thus deserving of a Wikipedia page. “Just because they don’t have a billion things written about them, that doesn’t mean they are not important,” said WVU student Brittany Reilley, who edited the “stub” article on Pulitzer Prize winner Matthew Lewis. “They [may] have had remarkable accomplishments.”

This brings us to a core problem: The lack of female and people of color biographies on Wikipedia is not only a reflection of Wikipedia’s largely white and male editorship, but it also mirrors the paucity of information on females and people of color across the internet itself.

“Wikipedia is drawing on published resources, and when that stuff is missing, we see that as an opportunity to engage in the question of ‘Why?’ That’s a good opportunity for the students to think deeply,” said Wiki Education Foundation’s communication manager Eryk Salvaggio.

Wiki Ed, an independent spinoff from Wikimedia.org’s Wikimedia Foundation, works to increase the quality of content through academic participation. “Because Wikipedia’s editorship is predominantly male, 80-90 percent,” Salvaggio said, Wiki Ed focuses on topics where there “is a very obvious gap,” such as creating more women’s biographies.

Wiki Ed’s program is 68 percent female, according to Salvaggio. And it was Wiki Ed’s partnership with the National Women’s Studies Association that drew in Connecticut College’s Vandana Shiva Assistant Professor of Gender and Women’s Studies Ariella Rotramel to use Wikipedia in one of her courses last semester. She’s written about the experience in “Feminist Praxis and Wikipedia in the Classroom.”

The current notability standard relies on the status quo as neutral when we know it is not. The very nature of what articles are included or excluded is driven by the passions and interests of the Wikipedians themselves, and thus not neutral. With notability standards demanding lots of coverage, the standard not only reinforces the status quo, but also serves to amplify the problems in areas where there is a paucity of coverage.

“How much are we talking about the standards of notability that don’t apply across all communities,” Rotramel questioned. “How much does the standard of having something already written make sense?”

This itself is an interesting dilemma for students to experience and discuss. “Kind of a circuitous logic here … Basically, you are saying (the biographies) are only worth doing in Wikipedia if people have written all about them,” McFarland said. “You’d think you’d want pages on the people whether or not lot and lots of people have written about them … How [else] do you go find the other people, the other voices?”

Many of the Wiki editors I’ve encountered or read seem thoughtful and well intentioned. This semester’s class had an article inadvertently published early by a student, and it was marked for possible deletion. The discussion among editors leaned toward deletion, but the ranking editor opted to have it remain. We’ve since improved it, but only so much information is available to meet the standards, given that the subject’s notable work was in the LGBT community.

Lots of Work, but Students Would Do it Again

“It was really, really amazing and interesting work we might not have seen otherwise,” Shaffer said.

From a professor’s point of view, the presentations were deeper. “They took pride in showing the person’s work and what was specifically unique about it … It really is world of difference,” McFarland said.

“In journalism school, every class ought to have a little bit of research,” McFarland said. This assignment does it well with students not only finding information, but also evaluating it under the strict scrutiny one needs for publication.

And then there was pride. WVU student comments varied from Leanne Shinkle’s “Cool, I did that,” to Jake McGowan’s acknowledgement, “I showed my parents,” to the words of Cheyenne Albright, who not only identified it as a “resume builder,” but described it as “validating.”

“For it to go live…” she said, “I must have done something right.”

Students are able to leave a lasting impact through this work. Just take a look at some pages that didn’t exist or were in very poor shape for Pulitzer winners Barbara Davidson (by Jake McGowan) or Matthew Lewis (by Brittany Reilley).

The Irony of Using Wikipedia

Our introduction to photojournalism course includes biographical research and a presentation to the class on a photographer. McFarland noted this year’s were the best ever, with students having deeper knowledge, more passion about the photographer’s work and the class more engaged, applauding after the best presentations.

“This seems kinda hard,” Reilley said of her first encounter with Wikipedia writing and research, “but it was actually super easy. If you couldn’t get it at first … you just needed to be shown once, and you can get it.”

Students in the first semester had more issues with Wikipedia than in the second course. Key differences were improved tutorials by Wiki Ed and, quite frankly, the fact that I was more knowledgeable and had created a biography template for students to copy into their own sandboxes. (A sandbox is a space where you craft an article, but it’s not yet an article page.)

Nancy Andrews has served her first academic year as the Ogden Visiting Assistant of Media Innovation at West Virginia University. Previously she worked as Chief of Innovation and Managing Editor for Digital Media at the Detroit Free Press where her staffs earned four national Emmy Awards and two national Murrow Awards. She began her career in visual journalism and worked for a decade as a staff photographer at The Washington Post.  She has authored two books. Find her on Twitter @NancyAndrews