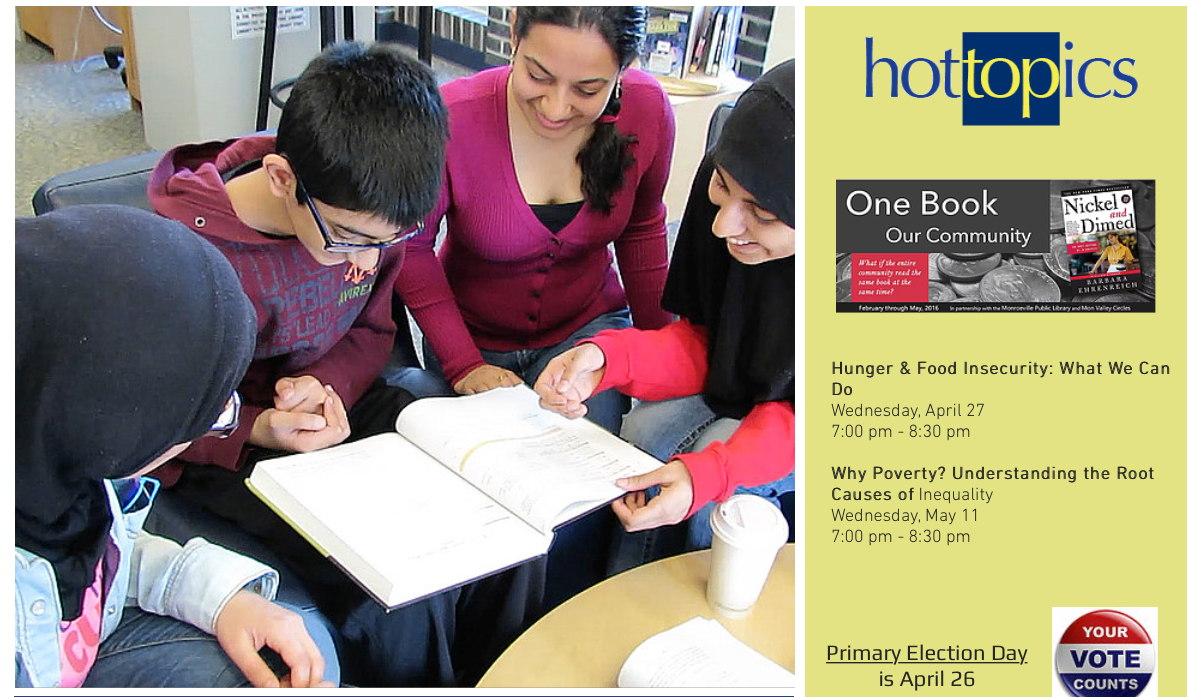 “I believe we have a responsibility to be partisan on the side of democracy, human rights, social inclusion, and social justice.” —Mark Hudson

But there’s another side to this story. Pew studies also report that Americans do head to libraries, online and in person, to read news and research topics of interest. People do value the services of reference librarians. And they do trust libraries to help them decide what information is trustworthy.

Libraries are now turning that trust into an opportunity: Around the world, they’re experimenting with more direct participation in the issues that affect their communities. Library teams are selecting topics of local importance, compiling resource guides that keep up with evolving issues, and inviting public discussion and debate.

At California’s Alameda County Library, guides to current events feature the “news you are talking about.” Feeds from local and international news sources dovetail with guides to newsworthy subjects such as privacy, elections and guns and violence. While research guides are old news for libraries, these modernized versions are created with content management tools like LibGuides that let librarians organize selected sources and incorporate live news feeds, reader polls and other interactive features.

Pennsylvania’s Monroeville Public Library invests nearly a third of the library’s home page real estate in “Hot Topics.” The goal, according to the library’s promotions, is to “guide you to reliable online news and information on the issues you want to know about.” Whatever the topic — from the Islamic State to the U.S. presidential primaries to local tax issues — visitors get quick access to useful resources vetted by a team of librarians.

It’s a thoughtful service with a conscious goal: to support the informed citizenry a strong democracy depends on.

“Librarians can help people gain the basic knowledge and understanding they need to participate in debates, engage in effective political action, and make the societies they live in more democratic,” said Mark Hudson, head of adult services and one of several librarians who contribute to the Hot Topics research, in an email interview.

Every few weeks, Monroeville librarians identify a new topic and present a short list of resources from the web, the community and the library collection to help readers learn the basics and find out where to dig deeper. Along with mainstream news sources, links may include public interest organizations, independent media and analysis.

Resources are balanced and diverse. “In the Hot Topics, we try to include a full range of perspectives on every issue,” Hudson said. “Not because we are neutral on these issues ourselves, but because we always want to help people understand the debate on a given issue and what is truly at stake for society in that debate, so they can form their own independent viewpoints based on real knowledge and understanding of the issue.”

Taking Up the Case in Norway

In Norway, Ericson argues for librarians to adopt an activist approach to democracy, building comprehensive portals that “take up the case” and expose hidden content, such as primary sources, that citizens might not find with a basic web search.

“The abundance of information on the web and in media conceals the fact that news and data are often insufficient, unbalanced, and/or very complex, and often as a result, poorly or not at all organized,” wrote Ericson in a blog post. “Dealing with such deficiencies has always been part of the library mission, and libraries should be the first to take action.” The research service, Ericson suggests, could be useful to journalists as well as the public.

Ericson cites as an example the Global Surveillance portal from the University Library of Oslo. For his part, he has documented a curation process and built a portal on a current topic of national interest: a controversial effort to consolidate Norway’s regional governments, merging nearly 500 municipalities into just 100. Hosted by the county library of Nord-Trøndelag, the portal highlights breaking news, coming events, documents, political statements and other resources. While special attention is paid to the impact of the civic mergers on libraries, the portal, Ericson believes, is the most comprehensive resource available to Norwegians on the larger issue of municipal consolidation.

“No library is in the position of competing with any local or national commercial news services with regard to the general, comprehensive news coverage communities need and deserve,” said Ericson. But with issue-oriented research portals and related discussions, he believes, libraries can “take up specific cases of utmost importance to the community.”

In Norway, Anders Ericson runs a library portal on the controversial subject of municipal consolidation. Photo courtesy of Anders Ericson.

Moving offline, Scandinavian libraries have taken up the debate in their physical civic spaces. Denmark’s libraries host “debate cafes,” programs offered jointly by public libraries, the Aarhus University Press, Danish National Radio and the newspaper Jyllands Posten. Dubbed “Tænkepauser” (“Pause to Think”), these open forums address broad themes like hope, trust, terror and truth. On a given date, community members can reflect on the chosen theme at the library or listen to national radio broadcasts on the same subject. A companion book from the university press is free to download, inexpensive to buy in print or available to borrow from the library. Authors lead off the coordinated national discussions.

“The library’s role has changed,” Tine Vind, head of libraries for the Danish Agency for Culture, recently wrote in the Scandinavian Library Quarterly. “Many libraries endeavor to ensure that the citizens reflect on the knowledge they acquire, and provide the opportunity for independent opinion shaping.“

Working with schools and other organizations, she believes, libraries can help equip people to become critical thinkers who can thoughtfully express ideas. “The library is in a position to safeguard one of modern democracy’s most important building blocks: freedom of speech,” Vind said.

Freedom of speech is not without controversy. In Sweden and Norway, updates to the countries’ 2014 national library acts require libraries to serve as independent arenas for public debate, Ericson reported in Information for Social Change. In Norway’s “debate libraries,” each library’s leader is charged with a role analogous to that of a newspaper editor, setting the content and form of debates just as an editor would guide a publication or a librarian would curate a collection.

Debates and discussions have been held in urban and rural libraries on international issues and hyperlocal concerns ranging from racism to energy futures to municipal consolidation—the subject of Ericson’s complementary web portal.

How is the media involved? “Some ideas have arisen about cooperation between smaller, local newspapers and public libraries,” Ericson said. “The idea is that the newspaper will need the library’s research competence and the library may take advantage of editorial resources. There have been a number of debates where the two institutions have cooperated, with a journalist as a moderator and on the library premises.”

A Bias Toward Democracy

As the conversation continues, librarians and journalists are beginning to find new ways to work toward a common goal: the informed community.

“Freedom, prosperity and the development of society and of individuals… will only be attained through the ability of well-informed citizens to exercise their democratic rights and to play an active role in society,” points out the IFLA/UNESCO Public Library Manifesto. And so libraries, anchored by the independence of their physical and virtual spaces, lean into democracy.

“As librarians,” said Monroeville’s Mark Hudson, “I believe we have a responsibility to be partisan on the side of democracy, human rights, social inclusion and social justice.”

Perhaps not all would agree. There’s one more hot topic to discuss at a library debate.

Laurie Putnam is a communications consultant and a lecturer at the San Jose State University School of Information. By day she coaches students on communications and helps high-tech clients tell their stories; by night she continues her work as founder of the Library and Information Science Publications Wiki. You’ll find her online @NextLibraries.