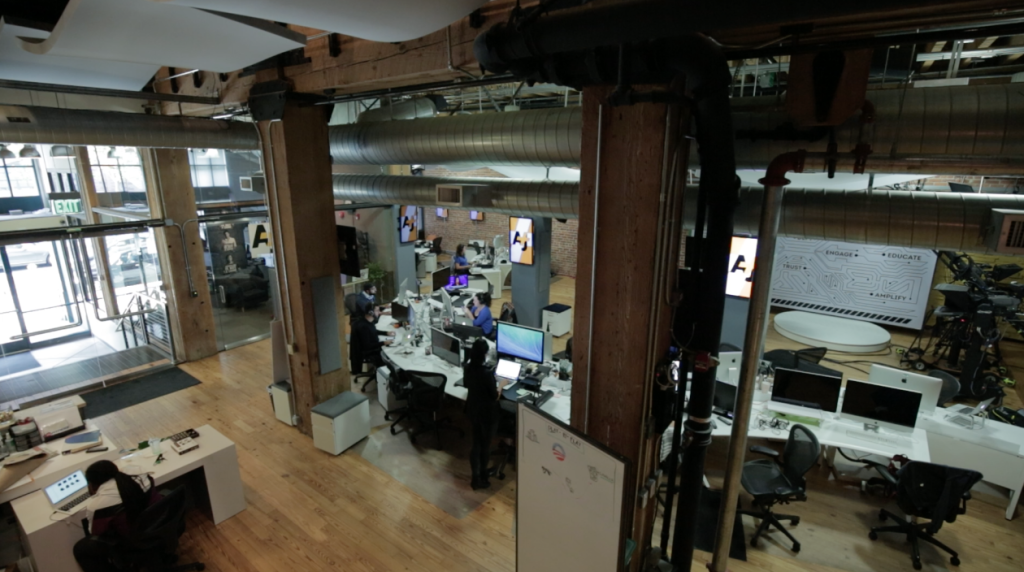 This is a guest post that originally appeared on the Video Strategist section of Storyhunter’s blog.

At the AJ+ headquarters in San Francisco, senior producer Geoffrey Dietrich received a story idea from his Asia editor that he never imagined would become a viral video hit. Not exactly the food videos or political gaffes that usually drive traffic, the pitch was about an elementary school in Japan where the kids clean their own classroom.

The 1-minute video clip was shared by over 600,000 people on Facebook and became the digital media company’s most popular story in its then-1-year existence. Views surged to almost 40 million, helping AJ+ become the second-most popular news video publisher on Facebook with almost 3 billion views.

“I knew it would be popular, but I didn’t think it would be that popular,” says Dietrich, a former producer for CNN and Current TV. “It was unique, authentic and just a great story. This taught us something.”

Their success in building a massive audience in a short time came from a mentality of testing and optimizing for each social media platform. In November 2014, Doha-based Al Jazeera Media Network launched AJ+, a digital venture with a mission of building a content strategy that is platform-agnostic, meaning it is distributed wherever its target audience consumes media.

They set up shop in the old Current TV offices in the SoMa neighborhood of San Francisco and signed up to Storyhunter (which I co-founded), the world’s premier marketplace for video professionals, production companies and journalists.  In the case of the video from Japan, Dietrich simply posted an assignment looking for a journalist on the ground in Tokyo. Then, Storyhunter’s curation algorithm selected and notified only freelancers with verified work samples from leading media companies. Dietrich ended up hiring Irene Herrera and  Naotomo Umewaka, who previously received positive reviews from Discovery and The Weather Channel.

Storyhunter allows AJ+ to efficiently manage their relationships with hundreds of freelancers around the world, as well as juggle multiple projects at once– without dealing with payments and contracts.

“The question no longer is, ‘who do you have on the ground,’ but rather, ‘what do we want to cover,’”  Dietrich said. “Our turnaround time has gone from hours to a matter of minutes.”

AJ+ since become pioneers in mobile journalism. Once news breaks, editors immediately post an assignment on Storyhunter and include their custom workflows and style guides. A group of vetted freelancers receives alerts to apply for the assignment if they fit the professional criteria set, based on verified work experience and reviews from other media companies using the platform. The local shooter they hire, whether in Bombay or Baltimore, often sends footage directly from a smartphone to Slack, a team chat app.

AJ+ editors provide real-time direction and guidance to the freelancer via chat, helping craft the narrative and focus the reporting on the issues they want to cover. The freelancer uploads footage to the chat feed and AJ+ editors begin putting together the video package, which gets published directly to social media.

In 2014, Facebook began aggressively pushing its video product. AJ+ quickly realized real-time news was a perfect fit for Facebook users who scroll through their newsfeed while on the go. This is when Dietrich and his team began developing what has become their signature social video format: 90-second videos with big block fonts, subtitles for all dialogue, original global reporting and a strong point of view.

For interviews, they ask subjects to look directly into the camera to add a more intimate feel. They make sure the first 5 seconds grab the user’s attention. On Facebook, each video plays automatically on mute, so subtitles and dynamic images move the story along. Timeliness and surprise are also important elements for Facebook video success, Dietrich says.

To generate original story ideas en masse, AJ+ leaves several open calls for pitches across themes or topics as varied as education, water scarcity or ghost towns. For these stories, video journalists use professional camera equipment as opposed to smartphones, and often shoot, produce and edit their own pieces. AJ+ editors commission the ideas they like, give feedback on any edits and add their styling to the fully-produced video.

Dietrich says Storyhunter has become a “force multiplier” for his six international editors, who can build crews anywhere news breaks. Each news package costs $300 to $1000, depending on the location and difficulty of the story. They found this price attracts experienced video journalists, like Herrera and Umewaka in Tokyo. These 90-second pieces can take a day to produce, especially if the editing is done at HQ. For the executives in charge of the budget at AJ+, it’s easy to make cost projections without variables such as hotel costs and plane tickets (or extra airline baggage fees for all the production equipment).

“In the past, if news organizations didn’t have bureaus in a location, they either had to deploy a full team or rely on the news agencies,” said Michael Shagoury, a former producer for Al Jazeera English. “Now, not only do you save money on production, you can customize every story and tailor each video for any platform.”

“A short newsy video that performs well on Facebook, many times will not perform as well on YouTube,” Shagoury said.

This year, AJ+ began replicating its success in new markets by launching AJ+ in Spanish and Arabic. They are testing out formats for Snapchat and Instagram.

But Shagoury is aware that building new audiences isn’t easy.

“Each platform and region requires special attention,” he says. “What works in English may not necessarily work in Spanish or Arabic, and it’s the same for different platforms. We have to be careful to develop the AJ+ experience and make sure to get it right.”

Correction: This post has been updated to correct the date which Al Jazeera Media Network launched AJ+.

Alex Ragir is a journalist, filmmaker and entrepreneur. Before co-founding Storyhunter in 2012, Alex was a documentary filmmaker and foreign correspondent for Bloomberg News in Rio de Janeiro. A frequent contributor to Businessweek and Bloomberg Markets magazine, he won the 2010 Overseas Press Club award for his investigative reporting on financial crimes across Latin America. He’s also the recipient of SABEW’s award for 2010’s best international investigative story. When not hosting a Storyhunter ScreenUp, Alex likes to climb mountains, DJ and mimic people’s accents. Twitter: @alexragir

To learn more about producing video for Facebook, check out our previous Video Strategist report on Facebook Videos.