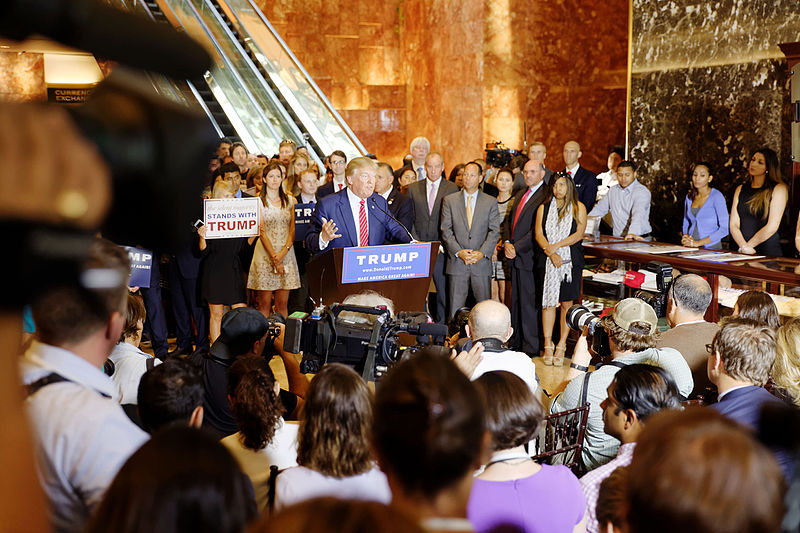 This week, the U.S. Department of Justice drops its case against Apple over unlocking a terrorist’s cell phone, the Oculus Rift VR headset is released to mixed reviews, and Donald Trump’s campaign manager is arrested for battery of a journalist in Florida. Mark rants about President Obama’s speech on the failings of media in the digital age. We’ll examine social media algorithms for our Metric of the Week. And finally, a one-on-one chat with Hadas Gold, media reporter at Politico.

"I still think like they should be [fact checking] and it's necessary to do it whether or not it affects the race." Hadas Gold on the political coverage for this current presidential campaign.

The U.S. Department of Justice hacks into a terrorist’s iPhone without Apple’s help

In the end, the DOJ blinked. The U.S. government had a court order forcing Apple to help it unlock a phone owned by a dead terrorist in the San Bernardino attacks. Apple fought the order, saying it would weaken privacy and security on its phones. But the day before a court hearing, the DOJ backed down, saying it had found a solution on its own. So what gives? According to a report in the Israeli newspaper, Yediot Achronoth, the Israeli forensic mobile firm Cellebrite helped the FBI crack the phone. The firm has worked with the FBI since 2012.

But many questions remain. We don’t have confirmation on how the DOJ cracked the phone, which has incredibly strong protection. And will the Feds share its methodologies with other law enforcement agencies that have iPhones to crack? So far, other court cases against Apple, including in New York, are still going forward and using the same obscure All Writs Act law from the 18th century! And there’s still an important unanswered question for media people and journalists — can they trust their iPhone encryption to keep them safe from the prying eyes of the government and hackers? Probably not.

The Oculus Rift VR headset is released to mixed reviews

We’ve all been waiting for the Oculus Rift headset, ever since it raised nearly $2.5 million on Kickstarter four years ago and was bought by Facebook for $2 billion. So finally it’s here, and it costs about $600, ships in July, and requires a high-end PC to run it. Plus, the original Kickstarter backers are getting headsets too. Reviews are in, and they aren’t all glowing. The problem is that you’re tethered to an expensive PC, the headset is a bit bulky and leaves users with a red mark around their eyes. And yet, the Oculus delivers a much more immersive experience than Google Cardboard or the Oculus-powered Samsung Gear VR. There are audio headphones included, and the power and complexity of the experience take a major step forward, according to Ben Gilbert at Tech Insider. As he put it, “using the Oculus Rift is a singular experience in current consumer technology. There is literally nothing else like it.”

But then again, Gilbert noted that the intensity of the experience also gave him a bad headache. This is version 1, and we all expect the experience to improve and get more lightweight over time. But what about how news and media people will use VR? Outlets like the New York Times and CNN have jumped in with VR initiatives, but will they develop for Oculus? Probably not yet. A recent Knight Foundation study found that there’s potential in VR journalism, but there’s also a financial risk if the hardware doesn’t become mainstream. Sure the Times sent out Cardboards to all its print subscribers, but how many of those are sitting in a corner collecting dust?

Donald Trump’s campaign manager was arrested for battery in Florida

Another story we’ve been following on the podcast has taken a twist, with Trump’s campaign manager, Corey Lewandowski being arrested by Florida police for simple battery for allegedly yanking former Breitbart reporter Michelle Fields after a speech on March 8. Lewandowski and Trump say they will fight the charge, even though police released surveillance footage showing him pulling Fields almost to the ground. Instead, Trump implied that Fields might have been attacking him, tweeting an image showing her reaching for Trump. And he said, we assume facetiously, “Can I press charges?” Later, he said on CNN that Fields “was carrying a pen” which could have been a “little bomb.”

In any case, the incident led to Breitbart News, which has been pro-Trump, to only half-heartedly back its reporter, leading her and five other Breitbart staffers to resign in protest. As Chris Cilliza of the Washington Post pointed out, Lewandowski would have been fired if he was running nearly any other political campaign in the country. He was charged for battery for attacking a reporter, and he lied about it afterwards on Twitter when he called Fields delusional. But rather than distance himself from Lewandowski, Trump has stuck by his man, and by extension condones his behavior. It’s hard to imagine how reporters must feel covering this kind of campaign, which is more like a war zone, where they could take collateral damage at any time just for asking a question.

In a recent speech at Syracuse University, President Obama decried the current state of politics in the country, as well as the state of the media. Putting on his media critic hat, Obama noted that journalists’ jobs have become more difficult. As he put it: “The appetite for information and data flowing through the Internet is voracious. We’ve seen newsrooms closed. The bottom line has shrunk.”

Obama spelled out what we’ve all experienced and noticed — that the news cycle has shrunk down to milliseconds, and journalists are forced to resort to bite-sized tweets and click-bait headlines. There’s less room for longer, investigative pieces, especially as coverage of elections comes down to a numbers race, a horse race, the he-said-she-said without proper digging.

And the results of that can be ominous for our democracy, of course. As Obama put it, “the choice between what cuts into your bottom lines and what harms us as a society is an important one. We have to choose which price is higher to pay; which cost is harder to bear.”

He also pointed out just how hard it is to find the truth among the chaos of social media feeds. Obama said that “Americans are hungry for the truth, it’s just hard to find. It’s hard to wade through. The curating function has diminished in this smartphone age.”

While I appreciate his interest in what’s happening with the media, and his support for deeper, meaningful journalism, he misses some of the positive developments that the Internet has brought us. He was speaking at the Toner Prize ceremony, and this year’s prize went to Alec MacGillis at ProPublica, for his work on “The Breakdown,” a series that looked at the influence of corporations on public policy, and how voters often make choices and vote against their own interests.

So why didn’t the President mention the great work of non-profits like ProPublica and public media in doing more meaningful work? They’re not beholden to shareholders like for-profit media, and they’re now providing an important piece of the watchdog journalism puzzle. True, they have to answer to large funders, foundations and corporate underwriters, but they do have more freedom to dig deep than most for-profit media.

And Obama railed against the lack of “curators” or gatekeepers of the news. But I think we’re in a much better place when we can hear from more voices, who now have a global platform to tell their stories. We’re not waiting for the New York Times’ editorial meeting to set our daily agenda anymore, and that’s a good thing.

One important voice online came from Cuba, where blogger Yo-ani Sanchez maintained a blog called Generation Y. She gained fame in the last decade by publishing blog posts by emailing them to friends outside of Cuba, who then posted them online. Eventually, the Cuban government blocked her site, but Sanchez has been able to publish her thoughts to the world at large, and she was even allowed to travel abroad in 2013.

While Obama recently visited Cuba and gave a historic joint press conference with Cuban President Raul Castro, he should also consider the role that the Internet has played there by helping open up political and dissident dialogue.

Of course, Obama also comes off as a hypocrite when calling for a free and open press, because his administration has been known for secrecy. Since he took office 2009, the Obama administration has denied thousands of Freedom of Information Act requests, and it has gone after journalists like New York Times reporter James Risen and Fox News’s James Rosen. And as Callum Borchers points out in the Washington Post, the president often gives interviews to outlets that are aligned with his views, talking to YouTubers, podcaster Marc Maron and liberal bloggers instead of outlets like the Post or Fox News.

So while I enjoyed hearing the President talking about the challenges for journalists in the digital age, I thought he could do better by celebrating the successes of our new age too. And he could do a much better job of leading by example when it comes to openness rather than casting blame on others.