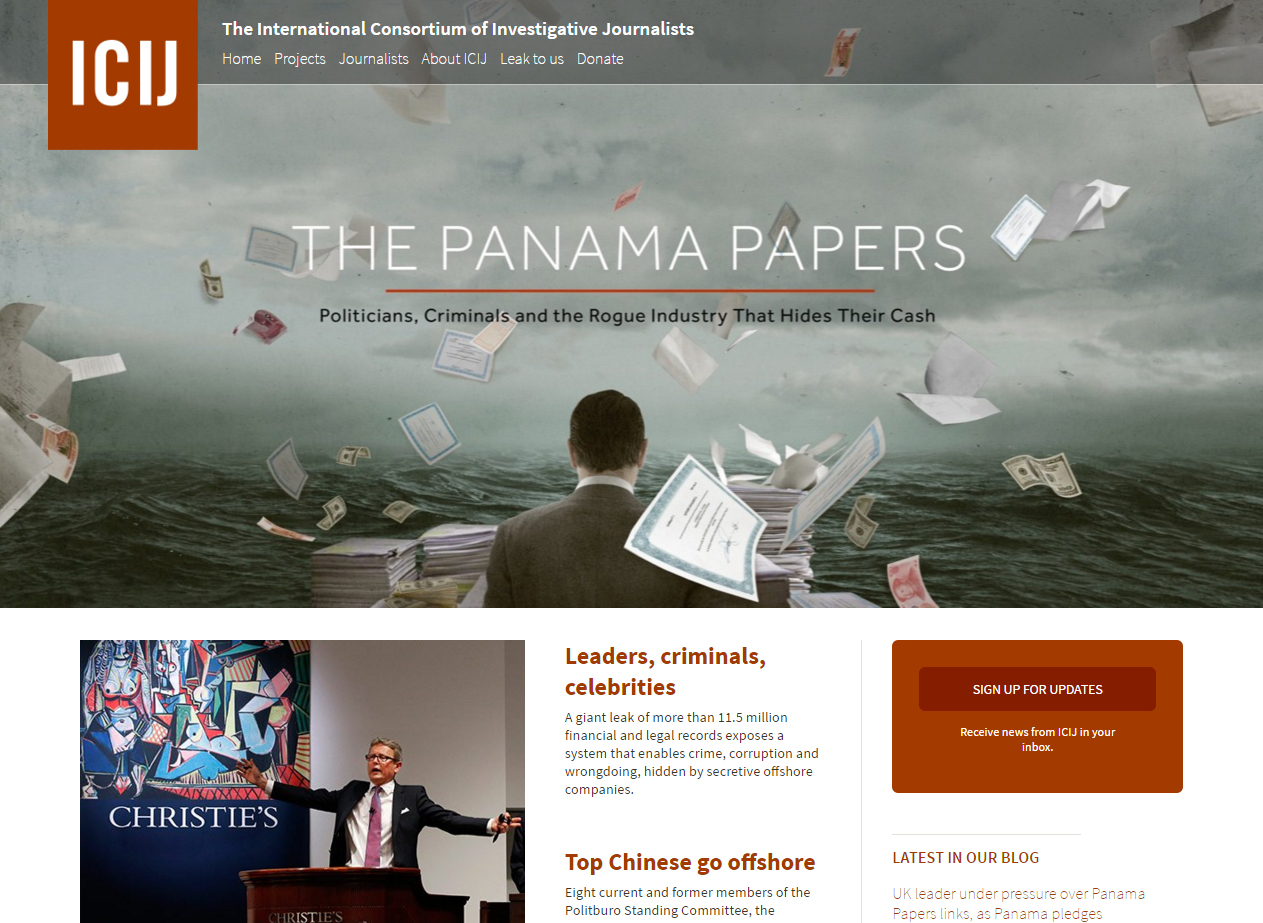 In the news this week, the Panama Papers scandal has world leaders on the run, Twitter wins streaming rights to Thursday Night Football, and Yahoo will live-stream one baseball game per day. And Medium is offering publishers a deal they can’t refuse. Our Metric of the Week is engagement metrics, and Mark raves about how the Panama Papers and digital leaks are transforming investigative journalism. Our special guest is author and provocateur Douglas Rushkoff, who believes corporate growth at all costs is hurting society.

Douglas Rushkoff is a professor of media theory and digital economics at CUNY/Queens. He’s also a technology and media commentator for CNN, digital literacy advocate for Codecademy, and a lecturer on media, technology, culture and economics around the world. His new book is “Throwing Rocks at the Google Bus: How Growth Became the Enemy of Prosperity.”

This is the leak of leaks, the one that dwarfs the diplomatic cables on Wikileaks ten-fold. In fact, hundreds of journalists around the world have had this data for the past year, and didn’t spill the beans. The millions of documents came from the Panamanian law firm Mossack Fonseca, a firm that specializes in setting up shell companies for the rich & powerful. Reporting from the International Consortium of Investigative Journalists shows that the firm had dealings with the president of Ukraine, associates of Syrian president Bashar al-Assad, the father of UK prime minister David Cameron and members of Russian president Vladimir Putin’s inner circle. The consequences of the leak are already being felt, with Iceland’s prime minister stepping aside after mass protests calling for his resignation. The list of names is expected to grow as the ICIJ and its media partners publish more stories.

There’s likely some wrongdoing involved with some of the people named, including Uruguayan lawyer Juan Pedro Damiani, who resigned from FIFA’s ethics board after the leaks. But the biggest revelation is that this activity — hiding wealth in offshore shell companies to avoid taxes, litigation, child support and more — is actually legal. As Brooke Harrington of the Atlantic points out, people with money can afford to create these companies within the law, even if it’s “morally wrong,” as David Cameron previously said in his campaign against tax havens. And the UK stands to be in the spotlight for some time, with so much offshore activity in UK territories like the Virgin Islands and corrupt officials laundering their money in London real estate. This cache of documents is a gift for journalists that promises to keep giving for many months to come. Will it really deter offshore activities for the powerful? Probably not, though it might lead them to think twice about it. More on this story in my Rant & Rave later on in the show.

One of the big snags for cord-cutters has been getting live sports. It’s not quite a breakthrough, but these new deals between Major League Baseball and Yahoo, and the NFL and Twitter are small steps in the right direction. The NFL deal will allow fans to watch the entire 2016 season of Thursday Night Football on Twitter for free. And baseball fans can look forward to a free baseball game every day on Yahoo Sports, for a total of 180 games this season.

But are these deals really game-changers? Not really. Yahoo’s live-streams will complement its current streams of NHL games, and last year Yahoo had the first live-streamed NFL game. But there will still be local blackouts of games. Yahoo’s hoping that the MLB streams will enhance its dominance in online sports, including popular fantasy leagues. For Twitter getting NFL games, it’s a big win over Amazon and Verizon, especially as Twitter only paid about $10 million for the rights. Even logged-out users will be able to watch, but Twitter won’t be able to sell much ad inventory, as CBS and NBC also have streaming rights. What’s happening is that sports leagues are figuring out they can sell digital rights to multiple players and add more revenues, while tech companies can build audience and loyalty in a competitive environment.

The startup Medium, founded by Twitter co-founder Ev Williams, was always a bit of a mystery. Is it a publisher or platform or the dreaded “platisher” encompassing both? Lately it seems to be pushing toward being a platform, by spinning off the Matter publication into its own company. And now it’s looking to become the platform for online publishers. Medium is offering publishers a variety of incentives including free hosting, integration with Facebook Instant Articles & Google AMP. They’re also helping publishers earn money from native advertising, either by linking to ‘promoted stories’ or by creating branded content. Indie publishers such as The Awl, Electric Literature, Serious Eats and Pacific Standard were among those joining Medium.

For the most part, this seems like a great move for both Medium and smaller publishers. Medium finally gets a business model, even if it’s the ho-hum business of providing content management systems. And smaller publishers get someone to deal with the hassle of back-end technology, memberships and even native ads. But of course, publishers are also giving up a modicum of independence. They’re depending on a platform that could be sold or shut down tomorrow, with terms of service changing on a dime. But on the positive tip, existing platforms like WordPress will be forced to adapt to compete with Medium. And that could be a good thing, in the end, for publishers.

We talk about disruption of media a lot. Netflix disrupts cable TV. Spotify disrupts music downloads. Facebook disrupts pretty much everyone. And “disrupt” literally means to interrupt an event, activity or process by causing a disturbance or problem. And if any type of media has been disrupted the most, it’s been investigative journalism. But rather than being a disturbance or problem, this new kind of digital disruption has brought vast rewards to the field.

I’m talking about leaks, born in the digital era when no one is safe from hackers or data breaches leading to amazing revelations. The first prominent source for leaks was, of course, Wikileaks, with Chelsea Manning sharing a cache of diplomatic cables that opened our eyes to the way that global diplomacy really worked. The revelations were embarrassing and game-changing for people who previously thought they could operate in the shadows.

And now comes the biggest and most timely leak of them all: the Panama Papers. A leaker or hacker, we don’t know who it is yet, gave a massive amount of information from the Panamanian law firm Mossack Fonseca to a German newspaper, and eventually the International Consortium of Investigative Journalists or ICIJ. We’ll get to why the ICIJ matters in a moment.

But first, let’s look a little deeper at what the leaker did. They exposed the inner workings of the offshore financial deals that help people in power hide their money from taxes and prying eyes. We all know that offshore tax havens have been around for decades, but what we didn’t know is just who was putting their money where. Tapping into Mossack Fonseca was like getting your gold fix at Fort Knox. It was indeed the motherlode.

And it came at the perfect moment in history, when the disparity between haves and have nots, rich and not-rich, is at the heart of so many problems. To find out that Iceland’s prime minister, or Britain’s prime minister — who both spoke out against financial shenanigans — were connected to offshore tax havens was the ultimate lesson in hypocrisy. And what this leak does to Panama is earth-shattering. This is a country that’s been fighting for legitimacy, trying to shed its image as a safe haven for money being laundered or hidden by corrupt world leaders. And one of Mossack Fonseca’s founders was even an advisor to the Panamanian president, trying to help shore up its reputation. Well, that didn’t work out too well.

Now who’s gonna work with that law firm? Who’s going to trust their dark money in Panama? The effects of this leak are only just being felt and will likely reverberate for years.

There’s a tendency to bemoan the state of investigative journalism in our new social age. No one has time for deeper, longer stories. We just want tweets and snaps and tiny morsels of news. And yet, this has been a time of astonishing change, with leaks leading to stories that have had deeper and longer lasting impact than ever before. And it was so appropriate that the ICIJ would be the recipient of such a leak. It’s a non-profit collaboration between more than 190 investigative journalists in more than 65 countries around the world. It was founded by Chuck Lewis, who also started the Center for Public Integrity, another non-profit pioneer.

The ICIJ gives away its content for free and has partnered with news outlets such as the BBC, CBC, Guardian, Washington Post, New York Times and others around the world in many languages. That means that when it does a hard-hitting report on climate change lobbyists or military contractors in Iraq and Afghanistan, it has reach. People know about it.

That’s the beauty of the Panama Papers. The perfect leak, on the perfect topic, and shared with the perfect news organization with a global footprint. It’s a shining moment for investigative journalism, and it’s pointing toward a future of more collaboration between whistle-blowers and journalists, where no one in power is safe, dark money can be exposed, and state secrets can become tomorrow’s headlines.